TOYS ARE US : The Real Ghostbusters

I've actively participated in the modern cultural ritual known as "Black Friday" several times now - and I don't mean like 'online' shopping. For a period of 5 years or so, I went out to the big stores & malls at 12am - trippin' on tryptophan, drunk on adult beverages, sinuses packed with pumpkin pie - and would experience the experience just for the experience. I've never actually sought out a particular item in the hopes of getting it at some mildly lower cost - if I had, then I'd maybe more-fully immerse myself in "what it's all about." But what I've experienced in these excursions has been hot, loud, crowded, and very intermittently exhilarating. But even more prominent than that, I've noted that it's very structured, there's (mostly) a cooperative sense of discipline, and a heavy police presence. There was no sprinting or trampling or fist fights like in movies or TV. It's just like being in a really crowded store in the middle of the night with gastrointestinal cramping and a vague recollection of what it's like to be at home, in bed, asleep.

But was it always like this? Probably not. I hope not - I went out looking for blood, looking for a train wreck, looking for a fucking party! I was hoping to be part of a viral video - instead, it's a chaperoned middle school dance in Nazi-occupied Poland, and they have flatscreen TVs mixed in with the hosiery. The ideas I had in my head of "search & acquire" Xmas shopping was always graphically detailed to me by my parents, recounting their blood, sweat, & tears pursuit of anything (or even everything) from the Real Ghostbusters Kenner line of merchandise in the holiday season of '87. 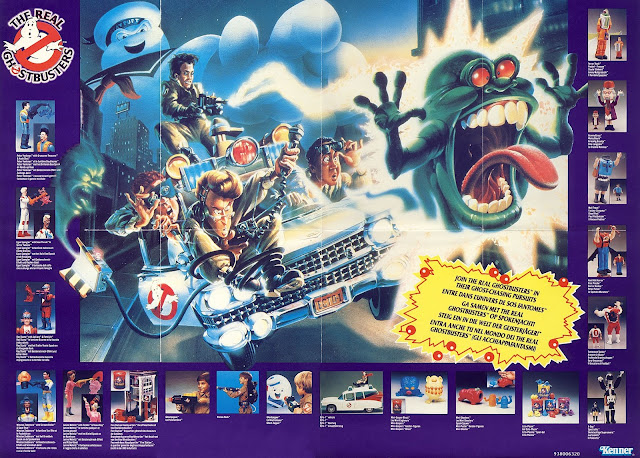 By their account, it was apparently quite the stereotypical hard target quest, striking out from store to store: Bradlee's, Kay-Bee, Child World, K-Mart, Sears, and probably various other now-dead or dying places of retail, gradually accumulating as many of the pertinent products that were available, but not stopping until they got their hands on what they thought was the most indispensable item of all: the Proton Pack.

It should be noted that this was all meant to be a surprise; this wasn't a Jingle All the Way situation where I was demanding (or even expecting) these products. I'm not even sure I was entirely aware of their existence. But my parents clearly were, and they weren't about to settle for anything less.

It's sad: I've got an excellent memory that reaches pretty far back - nearly to the beginning. But even for a nostalgic sap like myself, it's hard to 'totally recall' emotion in regards to (or maybe in lieu of) personal events or physical activity. Though I think it's fair to assume that I was adequately excited on Christmas morning of 1987. 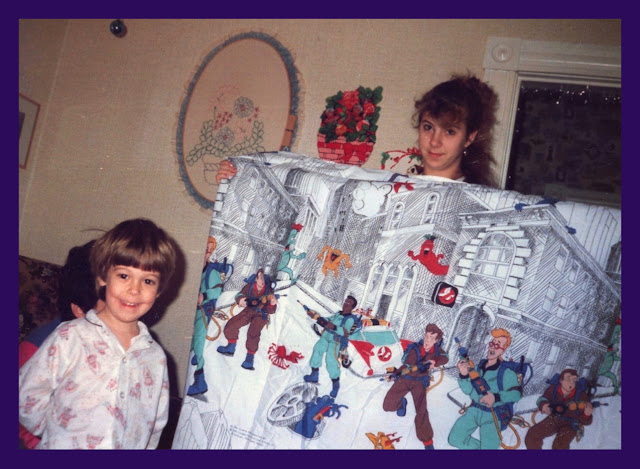 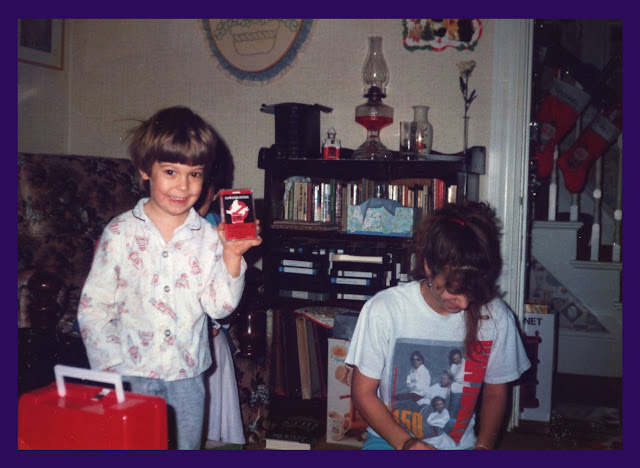 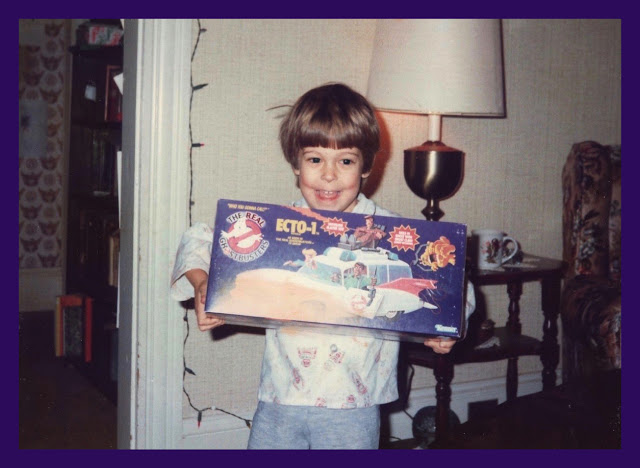 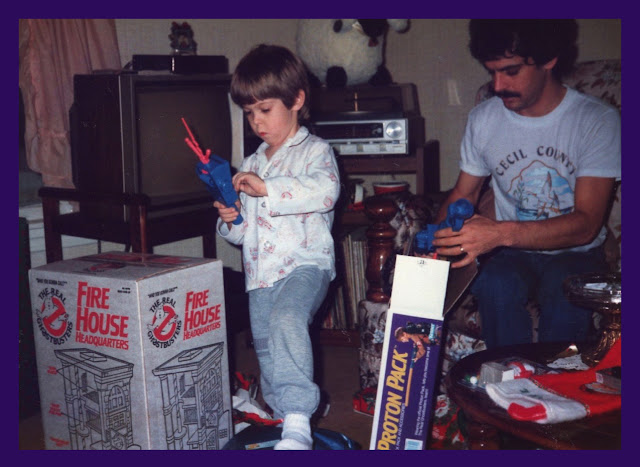 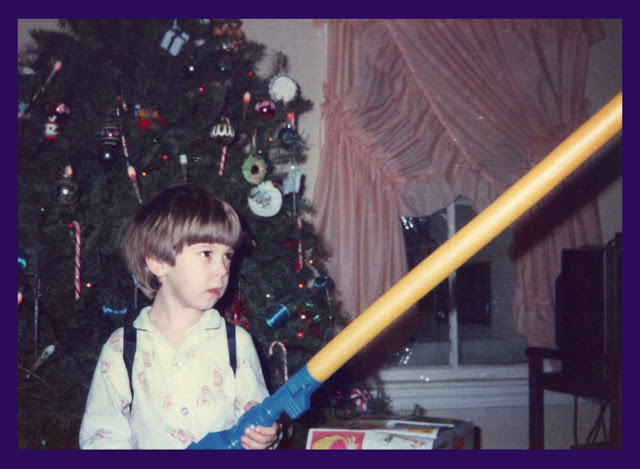 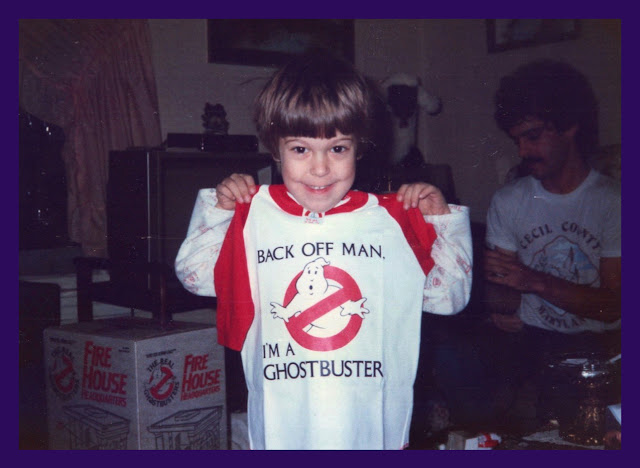 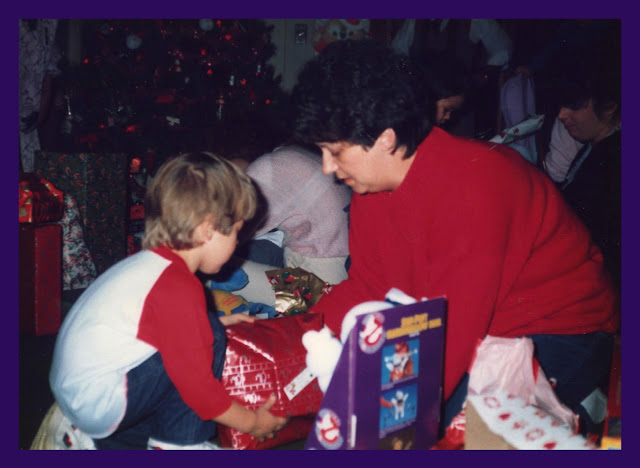 I remember the logo. Anything that had the logo (which was everything) would draw my eye into wherever it stood: particularly its prominence on the soundtrack cassette, and especially on the plastic Ecto-1, because, as I've done my best to explain in the past, the contrast of the logo against solid white has always been the turn-on. I also remember posing for some hero shots for my parents, and intentionally mugging like Egon in the theatrical poster that I woke up to in my room every morning. 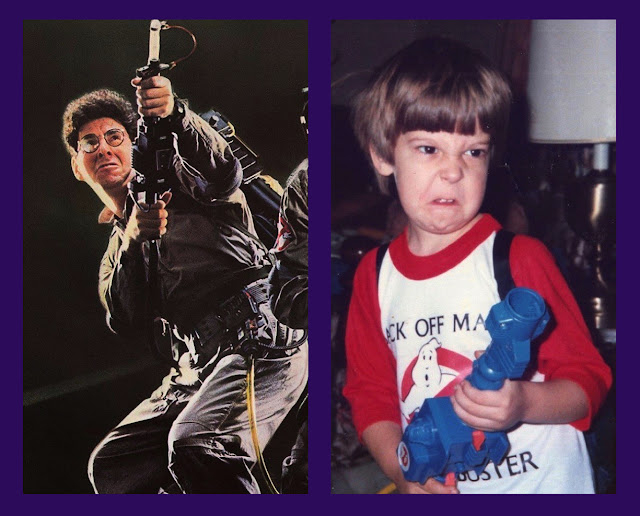 I was a fan of The Real Ghostbusters cartoon series -- in the sense that I watched it regularly and it was colorful and had moments of humor and it filled the moments between watching the Ghostbusters movie. But it certainly read as counterfeit in a lotta ways, and the tone was ham-fisted in comparison.
No big deal, except the designs for the toys (as accurate as they were) derived directly from the show, and I'm overwhelmed with confidence when I say that there was no way I was the only child who felt a constant dull ache of disappointment that these playthings didn't more closely resemble the imposing black scientific weaponry from the film - as opposed to the candy-colored blues & yellows that better matched the Slimer show that spawned them.

I can't complain, and I sure-as-shit didn't complain then. However, nowadays, I've seen stuff online and at places like Spirit Halloween that offer much more true-to-life replicas of the actual movie-movie props. (That screen-accurate Trap is concentrated pornography.) I'm both excited & envious for my son's inevitable plunge into Ghostbusters and the officially licensed merchandise he will have at his dispense.
But in the meantime (i.e. 1987) I "made due" as it were; the hollow vinyl Proton Pack on my back gave me the satisfying sense of miming the action of busting ghosts to the tunes of the sprawling soundtrack that had all the other, cooler songs that weren't the Ray Parker theme. The PKE Meter - as aesthetically pleasing as it was - was the biggest disappointment as it looked nothing like what Harold Ramis was using. The Headquarters was solid and majestic in appearance, and felt like an 'important toy' (my father still recounts the assertive absurdity of the assembly directions), but I mostly sidestepped the action figures it was made for -- I didn't want tiny little Ghostbusters. I was the Ghostbuster. Ultimately it was just a cartoonish monument to real life architecture.

There were other things: the Ghostpopper that shot foam yellow cylinders (and resembled nothing from the show or movie), the Ghostzapper that projected images of cartoon ghosts on the wall in the style of the Bat Signal, the decidedly Pop Art comforter that eventually became a dog bed until 1995, the plush Mr. Stay-Puft with the glow-in-the-dark 'no-ghost' logo on its ass... An endless parade of 80s-colored plastic junk that may've well been solid gold. But the truest & most lifelike gem of that jam was the Ecto-1: my favorite movie vehicle, and though a depiction of the cartoon car, the differences were negligible.

But it's funny: as consciously careful and respectful I was to my toys, they'd eventually succumb to the elements - natural or man-made - and slowly deteriorate and die.
The Proton Pack's final resting place was outdoors, on a bed of leaves, behind my house. Season after season, year after year, I'd peripherally pay my respects as its bright colors and plastic form endured the punishment of time, until one Spring when the snow melted and it was not there anymore.
Even my beloved Ecto-1 lost whatever functionality it had (shocks, brakes, brake pads, lining, steering box, transmission...).

But it's ok, right...? I mean, possessions are fleeting & all that, and whatever physical/emotional/spiritual voodoo the toys discharged into my young life was certainly and wholly consumed by my head & heart. I don't wanna make this some deep metaphysical thing (so I won't), but I suppose the true magic of it is my satisfaction in participating in a major pop-Americana sensation of my generation. For my age at that particular time, it was my Moon Landing.
I mean, I did see the Berlin Wall torn down on live television, but this was better. And more important.