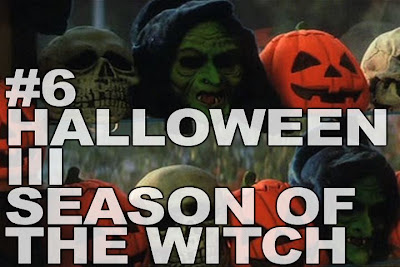 A sequel is a work of literature or film that is written after a completed work, and is set in the same "universe" but at a later time. It usually continues elements of the first story, often with the same characters, although this is not always the case - for example, if the main character dies at the end of the first work, a new character (e.g. their son or daughter) may take up their role in the sequel.
-- wordIQ.com

Why it's better
There are a couple movies on this list that are more than "moderately adequate." In fact, a couple are even "as good as" their predecessors (& in some cases, successors). I'll go even further with Halloween III and say that sometimes, late at night, in those frenzied moments before the sandman, I almost always consider it to be better than all other installments.
Yes, all.
Part one is full of abysmal dialogue delivered through inadequate acting. The story is full of holes, & moments of actual, solid suspense tally up to one or maybe less.
& so, the biggest flaw people find in Season of the Witch is that it doesn't continue that trend(?)
Halloween is one of the best lit movies of all time, & probably the best lit 'nighttime' movie ever. Only second to that is - yes, Michael Myers is pretty badass & has a cool mask. Though it kinda ends there; his backstory/mystique/motive/strength/powers weren't really pressing in part one, and have all but been destroyed by its sequels.
Most of em.
After Myers is 'killed' in II, the bigger, more important character lives on - October 31st. That's what people don't get -- or, they get it & don't care. Go to any message board or read any review, & more often than not, you'll find this line somewhere:

If it doesn't have Myers, it's not Halloween.

So, I just gotta ask: were parts 4 through 8 really that spectacular? Did the inclusion of Myers help them at all? You know, it was kinda spooky when he disappears at the end of part one, but when Loomis plainly and inexplicably survives a massive fireball at the end of II, it kinda sucks the spookiness out of Myers's longevity.
I'm not championing III simply by default, because, I will say that, apart from the fact that it is one of the most clever, logical continuations in a franchise, it is also legitimately chilling. It's startling and disturbing, and I can list all the films that fall under that criteria on my hand - at least for me.
Very few films of any genre dare to depict murdering children in gruesome ways. & when they do, it's for shock value.
Sure, it's used that way in Halloween III, but it's the fucking plot! Seriously! That's just too much awesomeness to put into words.
Halloween the holiday is really only about two things: kids & costumes. So, in that sense, Season of the Witch is more Halloween than Halloween. You know?

"I don't believe this commercial. It never stops."

My Will Is Good (Bodega Girls Remix)

performed by Port O'Brien
The song is free (and war is over) if you want it! 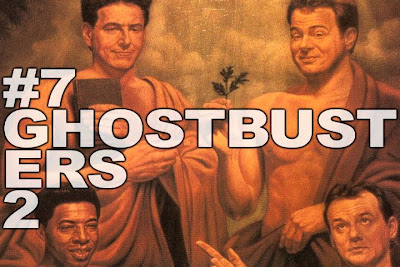 Why it's better
It's not. There's no way it could be. But, there are some movies--not many--that almost require a sequel. Sometimes to logically continue or wrap up the story, or, in the case of Ghostbusters II, because it has palpable serial potential. Ghostbusters had that, due to its discernible similarity to a superhero franchise: an inherently endless amount of weapons, cars, & villains. & GB2 follows through on that--kinda.
They changed the car up a bit - for the worst - and introduced a few new gadgets utilizing the power of slime (which is more of an advance in the mythology than the props). Perhaps the only things that were dead-on were the villain and the soundtrack (more on that later). And by villain, I mean Viggo, and not the slime.
Viggo is smaller than Gozer; not in physicality, but in scope and in threat (which is a welcome twist). While his worldly intentions may be roughly the same, he puts Dana's child in danger, making the target of harm more personal than, say, a giant marshmallow man.

Why it's worse
Part one had an amazing soundtrack - one of the best. & yes - part two's is extremely notable. The score, on the other hand...
Admittedly, it's taken me years to make sense of what it is about part two that feels so 'off.' I mean, it really is more or less the same stuff; like MIB2, Ernie Hudson takes 20 seconds of the first act to deliver some of the most clumsy expository dialogue ever written for the function of ignoring the first movie. & from that point on, the whole structure is rebuilt to mirror part one. So, why doesn't it feel like Ghostbusters?
With hindsight, the obvious answer is the clear influence of the cartoon, The Real Ghostbusters. Part two is certainly sillier/lighter, & while I never really gave a shit about slimer, he clearly got a 'revamp' in the movie to appeal more to kids.
And, as a side note -- It's amazing just how silly Rick Morranis was in part one, and yet, somehow, comes off as a caricature in part two. How is that possible, given his level of silliness in one? This isn't rhetorical - can anyone explain it?
And in trying to be more like the cartoon, it resulted in simply not being funny. And when you throw it up against one of the greatest comedies of all time, it just never had a chance.
So, even still being aware of all of these points -- same cast, crew, structure -- it still should've felt like Ghostbusters; or, at the very least, Ghostbusters II.
And so, here is a study in how important music is to a film: Elmer Bernstein was replaced by Randy Edelman -- as well as on all Reitman films to follow.
I like Randy Edelman - if only for his Gettysburg music. And, even putting aside the fact that his music for GB2 sucks real bad, the real flaw is that it's not Elmer Bernstein. Yeah, his score for one is great, but, great or not, therein lies the lacking familiarity that would have saved it. 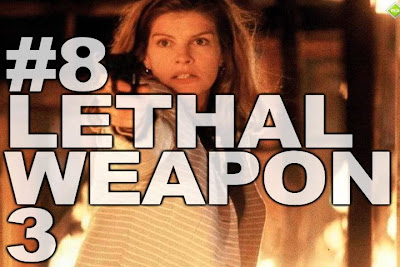 Why it's better
The first two did a helluva job establishing Riggs as the loose canon & Murtaugh as the family man who's too old for this shit. In an obvious but very welcome twist, Lethal Weapon 3 has Danny Glover taking over the crazy reigns for a Dirty Harry-esque sequence that, on its own, carries the movie. The best part about it -- it's not a role-reversal plot copout; Riggs hangs in background, cheering him on.
The sequels of this franchise never shied away from the obvious plot device of simply and shamelessly 'adding characters.' However, the idea of the Rene Russo character is a refreshing, clever addition. The way it was executed...?

Why it's worse
Easy -- right off the bat, one of the shining blunders in all of sequel history ever: who was the villain? There was one, yeah. What did he do? What was his motivation - guns? drugs? Anyone? Where was he for 80% of the movie? I don't even think he had anything to do with the story! A poor villain is one of the most shameful things in the action genre.
& yeah, the idea of giving Riggs a female match is admirable, but the fact that she's given the worst dialogue & delivered by a mediocre actress pretty much snuffs it out.
Alright, so Joe Pesci was a vaguely pleasant addition to 2. But here's a contradiction to the laws of physics: it's as though he was somehow crammed into an otherwise empty movie with 3.
Get rid of Pesci, give his screen time to a better villain. 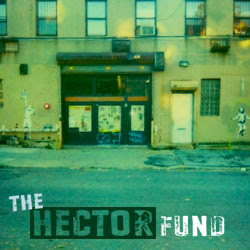 Bennett Media & The Hector Fund are going all the way on our very first date to bring you the first installment of Hector's List.
First up: top 10 rock films 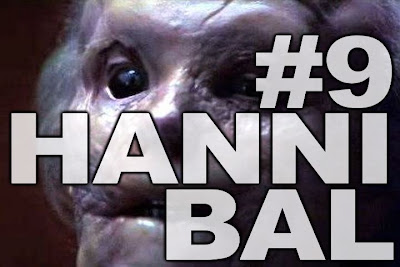 Why it's better
It would be unfair & kinda pretentious for someone to express disapproval in "overusing" Lecter as a character. Sure, he was kinda the Shark in Lambs; most frightening in quick bursts of screen time. So, in a book/film named for him, we can only hope for a kinda superabundance in all things Hannibal. & we maybe kinda sorta more or less do. Most of what we get from him is through character interaction -- glazed with tension, only cause we've already seen Lambs. There are few surprises as to what Lecter's 'world' would be like: lotsa classical music & European settings(!) But what does make it interesting are the characters that inhabit it: sleazy cops & a wealthy disfigured vigilante turn Lecter into the protagonist of a true-to-school horror movie. No kidding! Who wouldn't love that?!

Why it's worse
Yes, it is necessary to compare it to its predecessor(s) -- and not in a George Lucas "they've already made up their minds" kinda way. I crave a good sequel.
However, apart from Tony Hopkins playing Hannibal Lecter, it ain't no kinda sequel. There's nothing wrong with a change of pace & scenery. But, perhaps one of the most personally painful gaffes in film history is the absence of Jonathan & Jodie. Even - EVEN - if the movie had sucked, it would have been indescribably rad to have the three of them together. I really don't like Ridley Scott, & while Julianne Moore is my favorite actress, this was the weakest performance of her entire career (& that does not derive from my desire to see Jodie Foster in the part). Additionally, I would also choose Ted Tally over Mamet & Zaillian - just for the symmetry of it (and also the fact that polishing each other's scripts only resulted in one shiny writing credit).
So, Ridley's stylized-opera directing & Julianne's stoic acting & forced atmosphere & predictable set pieces are why it's worse.
That, plus, I'm comparing it to Silence of the Lambs.

"Nobody beats the Ris."

Labels: adequate sequels, commentary, sequels, The Silence of the Lambs 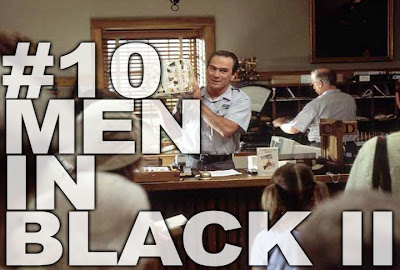 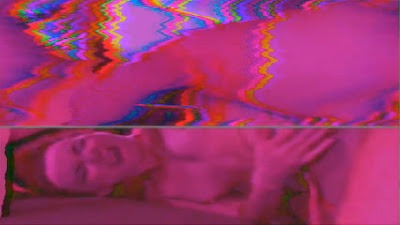 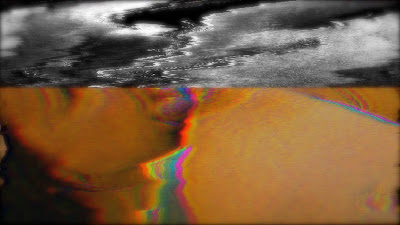 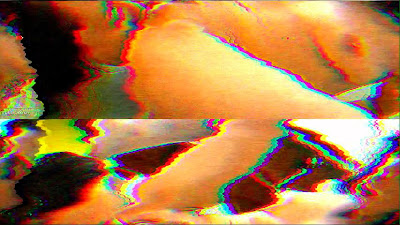 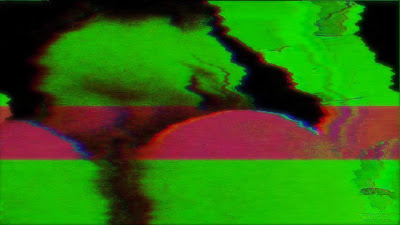 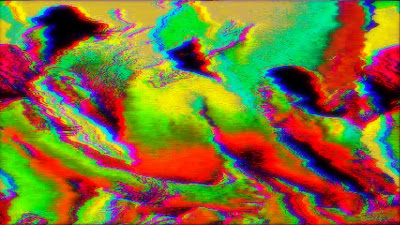