Y'know, there are a handful of things - interests, hobbies, obsessions - that I hold off on writing about because I assume I've already written about them at least a dozen times. And then there's the happy/embarrassing realization that I haven't - I'm just thinking about them all the time, and my boundaries between reality and fantasy are all fucked up. Topps Wacky Packages (or "Wacky Packs") is one such obsession that I never don't wanna talk about. To put it another way (without the confusing double negative), when I'm in the right mood, I feel like I could just dedicate the entire site to these colorful stickers (except that there's about 70 other topics for which I'd do the same).

If you don't already know them, Wacky Packs is a sticker series, and each sticker kinda 'parodies' a different 'product' with the use of gorgeous artwork and bad puns. (If you're at all new to this, that description may sound vague, so let's clear that up right now...) 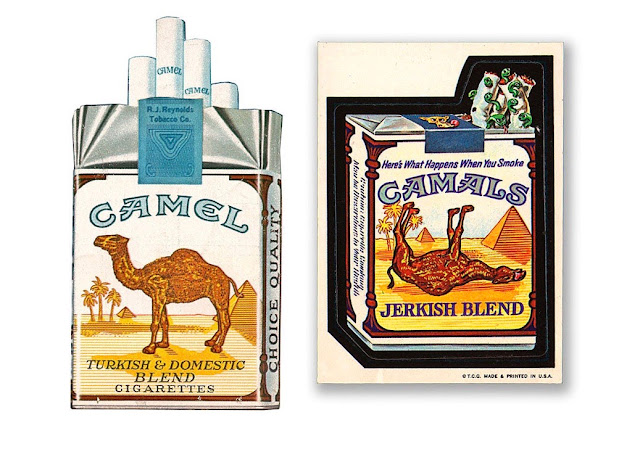 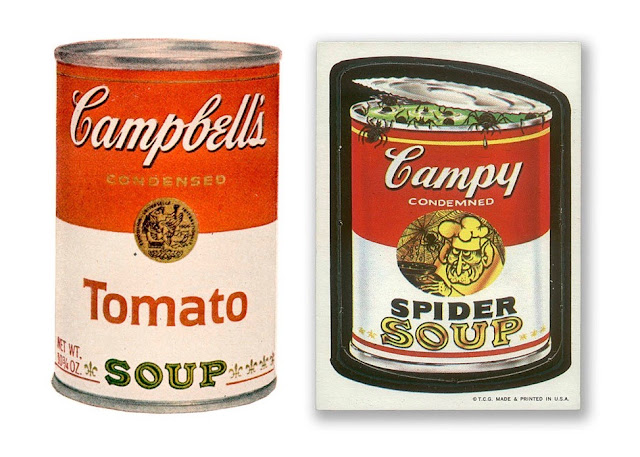 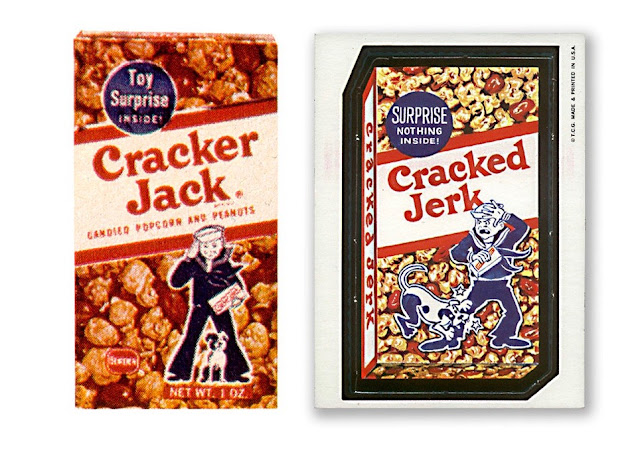 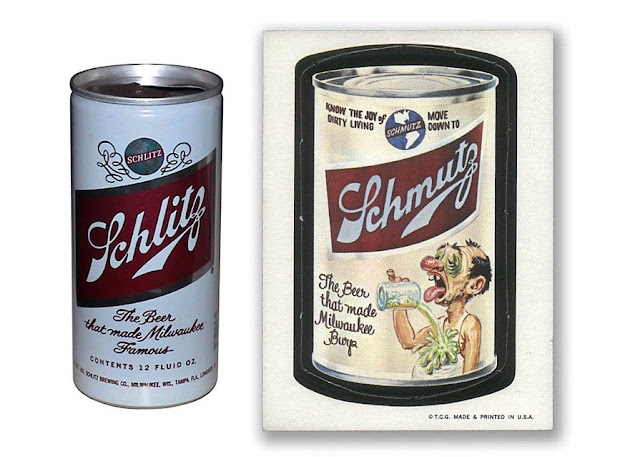 The first series debuted in 1967, and there've been, like, 20 more series since then - all the way up to present day.

There was a bit of a dry spell in the 80s, ironically due to the fact that one of their unpublished stickers - a takeoff on Cabbage Patch Kids - went on to have its own wildy popular series of cards titled Garbage Pail Kids, thus stealing the spotlight in the 'Topps gross-out parody' genre. 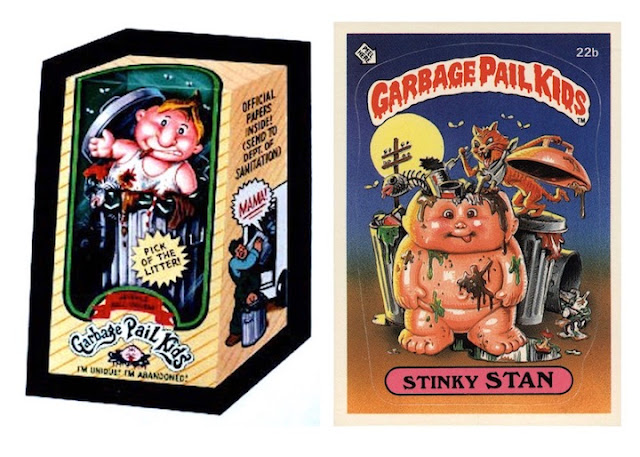 I became aware of Wacky Packs when they released a new series in 1991. For slightly older folks, it may've been a bit of nostalgia; for me, it was new, exciting, and all around bizarre. C'mon, it was downright wacky! 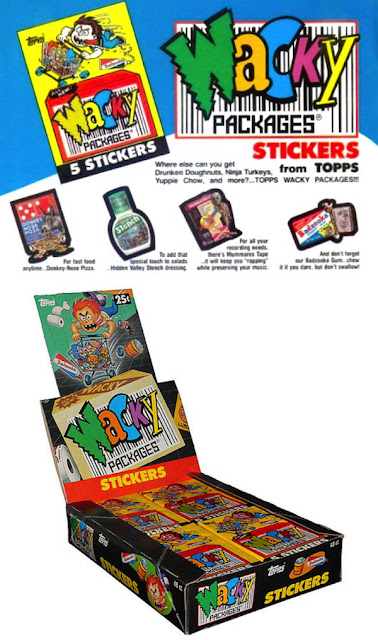 I can't be entirely sure of what the appeal of Wacky Packs is to other people -- and if they flat-out don't appeal to you, we can never really be "friends" in the true, pre-social media context; I mean, I'll continue to be courteous and receptive to courtesy, and maybe feign interest in whatever you're into, but you'll never be part of my world.

I digress, though. The point I'm trying to make is that I assume that other people (and by that I mean other kids) maybe responded to the boogers and throw up-type stuff or the wordplay (which could be funny at times), but for me, this was just an ode to labels, logos, and advertising. Had these been stickers of actual products and brandnames unmolested by satire, I might've loved them even more. If you've paid any attention to this site for the past 10+ years, does this really come as any surprise? I'd probably eat cilantro-flavored Peeps if they were packaged in an interesting way - because I wanna point out that, while these depictions are all just a big gag, the artwork is spot-on, hammering the spike between real and surreal.

The 1991 series hit me just at the right time; not only did the collection of 55 different stickers parody the products I was already consuming (video games, action figures, trading cards), but this was around the time I started to really notice & study all kindsa labels & logos: from Cosmo to Colgate to Chrysler, all these designs and color schemes began to speak volumes to me, and so to have collectible stickers that celebrated this awakening was a gift from God (or The Devil - it didn't matter).

I "peeled here" and stuck there to no end, all over every bit of wall and furniture that was bestowed upon me as "my own." Over a decade later I reacquired the set, and I am now much more conservative with stickers (as in: I Don't Stick Them).

I love them all so fucking much, but here are 10 standouts from the 1991 series of Wacky Packages. 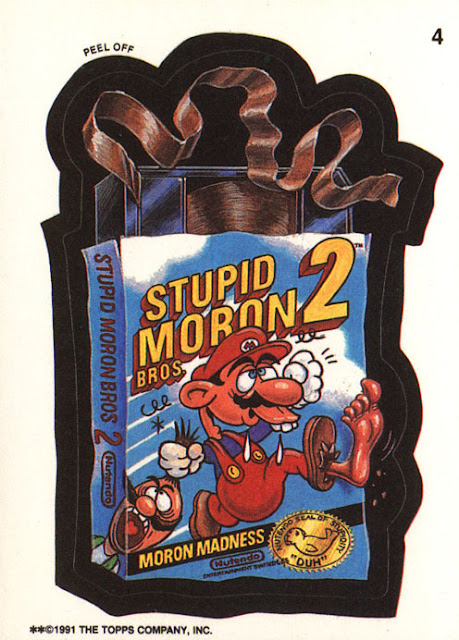 This is an easy one to love -- Super Mario 2 is my favorite Mario game for a million reasons, but close to the top of that list is because I love the box/logo so much (SMB 3 is a close second). This illustration (like all of these) is close enough to the original to love it just as much. Though, it's funny: for all the little things they change into jokes, I never understood why this box contains a cassette tape rather than a game cartridge. 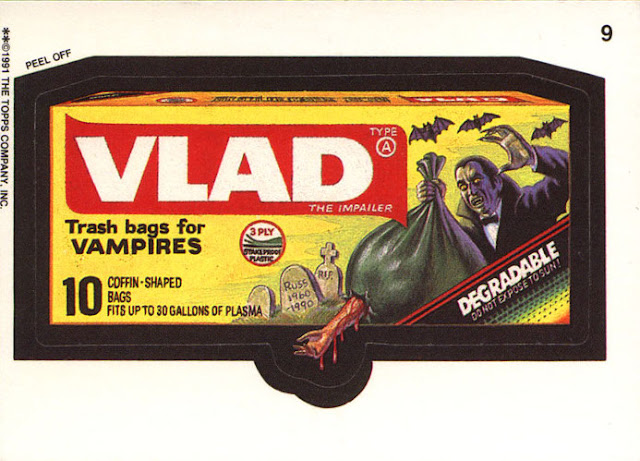 Cartoon Draculas are always gonna be my jam - not to mention cartoon bats, cartoon graveyards, cartoon anything Horror that could at all resemble cardboard Halloween decorations. I also love that the exposed corpse arm completely changes the boring rectangle shape of the sticker. 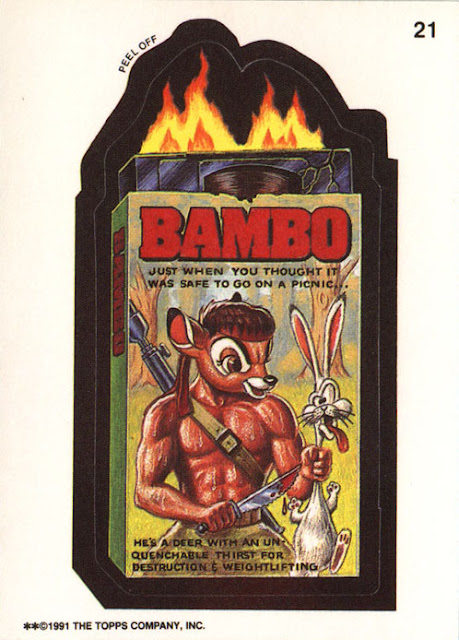 I thought Disney was kinda lame when I was a kid (oddly because that's how I was raised), so I suppose anything that made fun of their catalog seemed 'edgy' to me. All of that aside, this is still a wonderfully violent cross-pollination of two pop culture icons that still holds up. 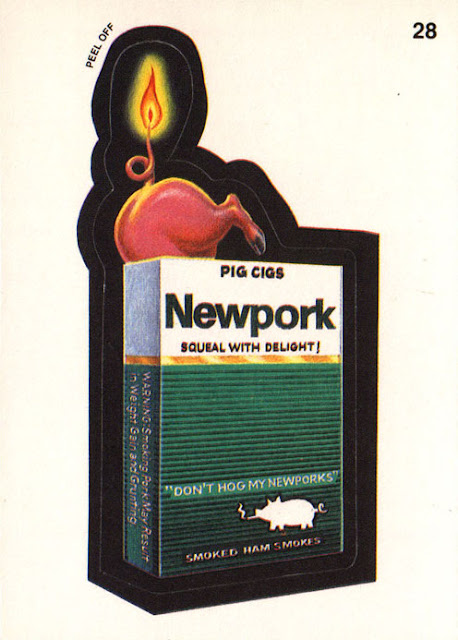 I'm just so pleased that even into the 90s they were still lifting cigarette and alcohol labels for their stickers. But that was the point - I wasn't a smoker or drinker when I was 8, but I knew this package well, and so did every other kid: if you blur your eyes, it's immediately recognizable as the original thing, because this whole deal celebrated consumerism at its blissfuly shrewdest. 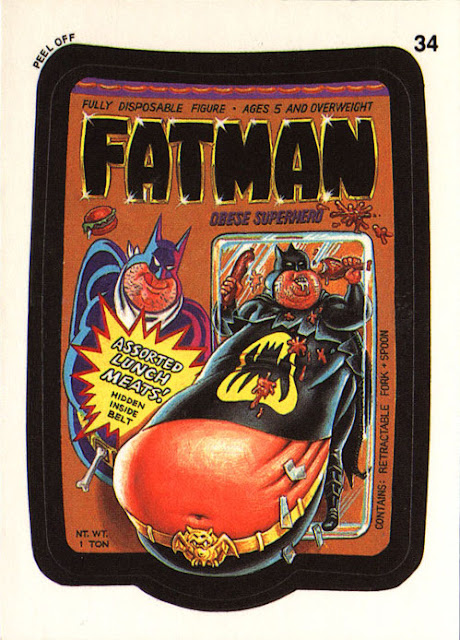 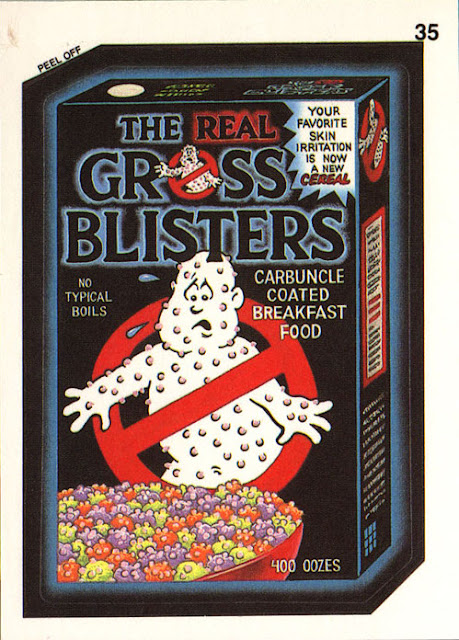 Again, not exactly Ghostbusters, but Ghostbusters cereal, which, between the animated series and the sequel, seemed to stick around for a lot longer than most tie-in cereals. And like the Mario sticker, it's just close enough to the original to stir up excitement for... well, the original. 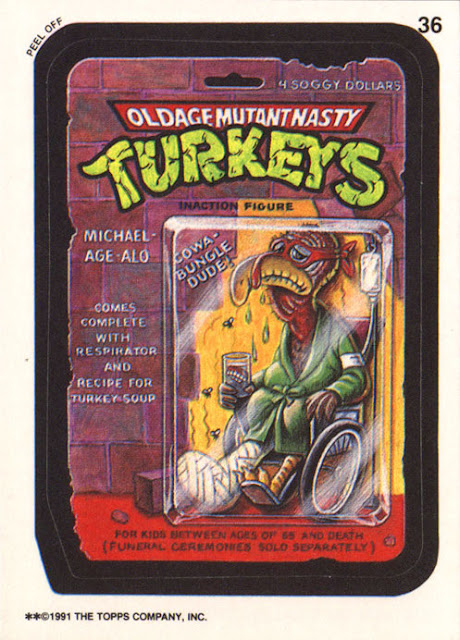 I can't believe I chose ten of these things - I mean, I love them all, but it's pretty self-explanatory at this point. For this one, I say sit back and just enjoy how wonderfully they turned "Turtles" into "Turkeys" while maintaining that same detectable design. Also, "Inaction Figure" is just funny as all hell. 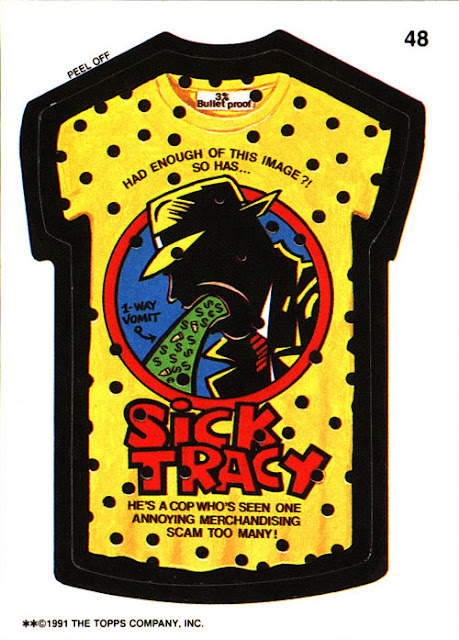 Well this is timely and relevant - we just went over the advertising thunderstorm that Touchstone put our young minds through, and here's a pretty honest commentary on it. Of course, when I first got this sticker, that subtext didn't resonate with me: I just thought it was Dick Tracy throwing up, so he was "Sick Tracy." Ignorance is bliss. 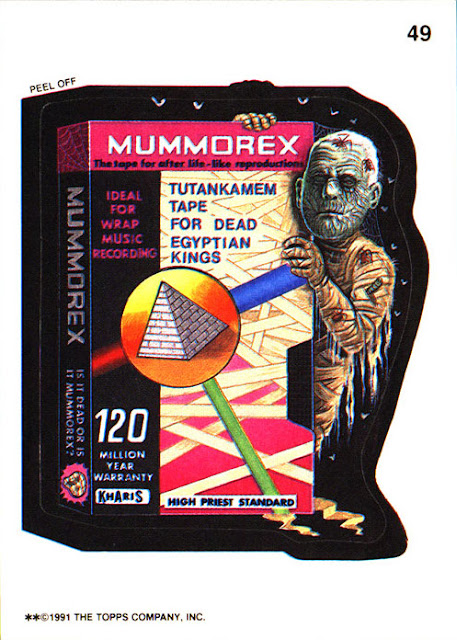 This is close enough to the original that I just started referring to Memorex as "Mummorex." This was possibly the happiest marriage of two things, because, I don't know about you, but most blank tapes in my lifetime had at least one Horror movie on it, so this gelled so fluidly that it was easy not to even notice the farce. Plus that cartoon pyramid is just delicious. 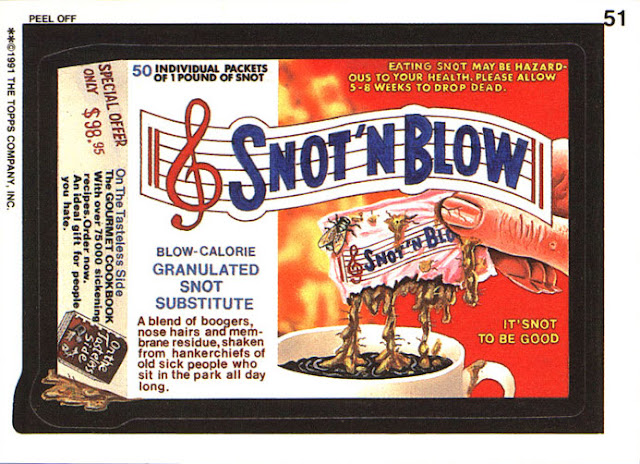 My mom used Sweet 'n Low, so it was always in my line of sight - so, that made it super nostalgic for me even while it was happening presently. And, again, the transition is so seamless that one has to do a double-take to see there's comedy going on here.