Once upon a time, in my lifetime, one had to seek out art and popular culture: we had to go to stores (sometimes many, because there were many to go to) and search for that video/album/comic book/trading card/poster/t-shirt/whatever, otherwise we went without it and it lived only in our fantasies, and we were poorer for it.

Today, everything's available - especially if you have even mildly broad tastes - and, you know, there's nothing logistically bad about this; it can become hard to see the forest for the trees sometimes and not fully appreciate that I can view any episode of Banacek at any time of any day. And that's just older stuff: we're in the age when new pop culture finds us and tunes us in without ever having to leave the comfort of our open-mouth gaze.
What a time to be vaguely alive!

But this is a story from long before trending tweets and viral memes and streaming binges, and how a cultural cornerstone and major centerpiece of my life dive-bombed onto my radar through the organic algorithms of momentum, smut, and God. 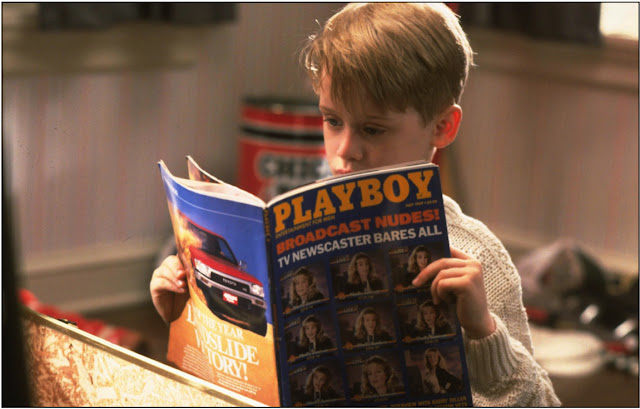 If you're at all close to my age (or younger), there's probably a good chance that you too spotted the July '89 issue of Playboy for the first time in Home Alone. In the movie, Kevin is startled & disgusted by the content of the magazine (because he's too young, you see), and by that metric, Buzz is, on all counts, not.
Even at the age of 7 I found Kevin's reaction to be manipulative and unlikely. In Buzz's bedroom of generic pubescent male treasures, the Playboy was, high & firm, the brass ring, and Kevin (who's playing a year older than myself at the time) would've recognized that fact in a less family-friendly fable. (He chooses a gun instead, go figure.) Now, Home Alone's never been my go-to guide for Cinema Verite, but when Kevin dismissed the magazine as "sickening" whilst tossing it into the ruins of the bedroom, my internal monologue asked, "What the fuck're you doing, that's the best thing you've found!" In summation, the movie made me feel as though there were something wrong with me, or the movie simply wasn't realistic.
In my ongoing narcissism, I settled on the latter.

Cut to 1993, and I rent Under Siege as a New Release video. And lo and behold, there it is again: Buzz McCallister's sickening nudie mag, very very prominently used as a prop (and an almost-plot point). At this point in time, I'd honestly figured that this "Playboy" I kept seeing in Hollywood movies was, in fact, a 'prop' - an issue of Playboy that never existed and was designed and created for the purposes of appearing in film & television: with its busy, nondescript cover that looks unlike all other Playboy covers, and its contents that are always conspicuously hidden from us. 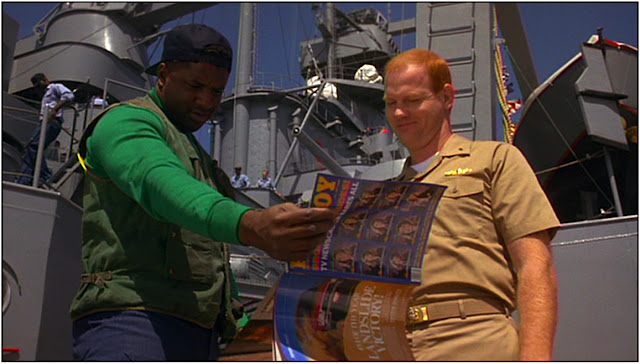 In the movie, the lead female character is Jordan Tate, aka "Miss July," the issue's Playmate of the Month, depicted in a centerfold that's never shown to us. When I learned Jordan was simply played by an actress of a different name, that more or less solidified my assumption that this movie-Playboy was, indeed, fake.
Still, though, she was very convincing in her role, and the title "Miss July" stayed with me for some time. 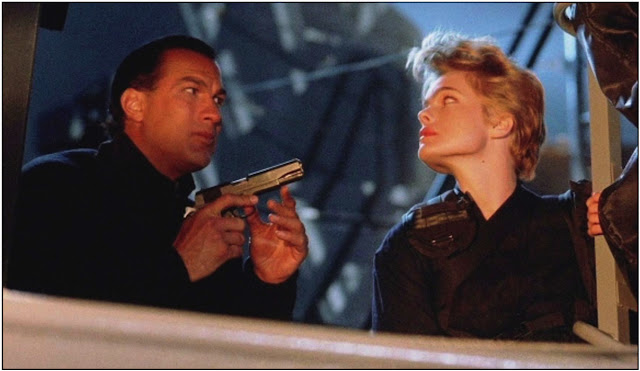 The following year - '94 - a kid on the bus ride home from school makes me an offer: five dollars for a Playboy magazine. I can't imagine what the hell kinda conversation we were having that landed there (or, he just suggested it outta the clear blue), but the proposition was put forth, and I immediately devised a plan: I'd hoard my milk money for a week, so by Friday, I'd be stanky rich and the transaction could be made.
Everything about this scenario, at the time, was almost too exciting to grasp: I was involved in a secret plan without the council or moderation of any adult, the subject matter of the premise was decidedly provocative and dangerous, and at the end there was the promise of a potentially outstanding reward. In the even larger scheme of life, I learned how to save money with the skills of frugality and deprivation, i.e. I was budgeting and making sacrifices in order to reach a specific goal. But more than any of this was that I had to confront the idea of "lying" to my mother, who believed this money that I was allotted was going towards some form of nutrition. But through a bit of denial and self-talk, moral ambiguity convinced me  that this was a stance of independence and a right of pending puberty that was owed to me.
I might've actually been right: a minuscule carton of MALK was no competition for potentially formative material goods.

Friday came, and we decided to wait until my stop approached to do business. And as the bus brakes screeched, I handed over my five crinkled singles, and from out of his open backpack and into mine, there it was: a glimpse of immediate recognition, Playboy, July 1989, the magazine from movies, very quickly became mine in the smoothest smut deal that ever went down. 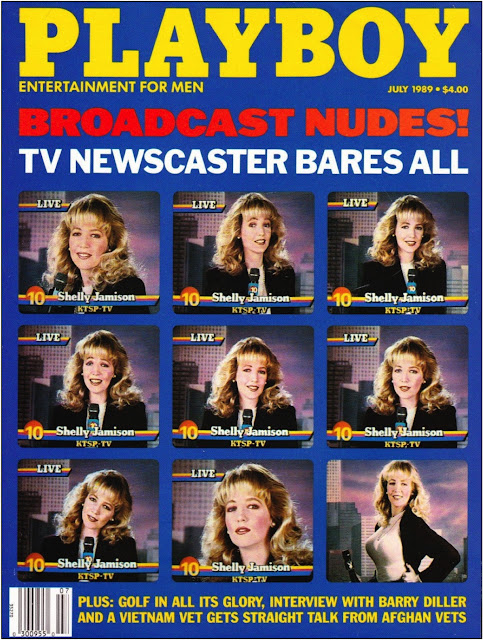 My first Playboy...
Boy, there's a lotta articles, huh? I was taken aback by how much combing is required to catch a glimpse of a bare T or A. But in this - this "movie star" issue of Playboy - you will see/read about:


Some fun stuff. Some not so much. But when I was 11, none of it mattered. In fact, there was very little else in the world that mattered more than Jordan Tate, aka Miss July, aka Erika Eleniak:

BUST: 34
WAIST: 24
HIPS: 32
HEIGHT: 5'5''
WEIGHT: 108
BIRTH DATE: 9-29-69
BIRTHPLACE: Glendale, Cal.
AMBITIONS: To be a successful, happy person. One day I'd like a house in the country and happy babies.
TURN-ONS: water, cool, sunny days, sunsets, the beach, happy people, holidays & chocolate-covered strawberries.
TURN-OFFS: smog, complainers, narrow-minded people, drugs, arguing and traffic!
FAVORITE MUSICIANS: Rod Stewart, Stevie Nicks, The Grateful Dead, Elvis, Aerosmith, The Red Hot Chili Peppers, Ice-T & Rappin' Dr. Geek
FAVORITE MOVIES: The Godfather Saga, 9 1/2 Weeks, The Color Purple, La Bamba, Sophie's Choice, Fatal Attraction & Mask.
I'LL KNOW I'VE MADE IT WHEN: I am completely satisfied with who I am and where I am, inside and out.
IDEAL WEEKEND: Going to the Colorado River with my Honey - We'd have lots of fun in the sun, wild nights and when we were together, endless laughter. 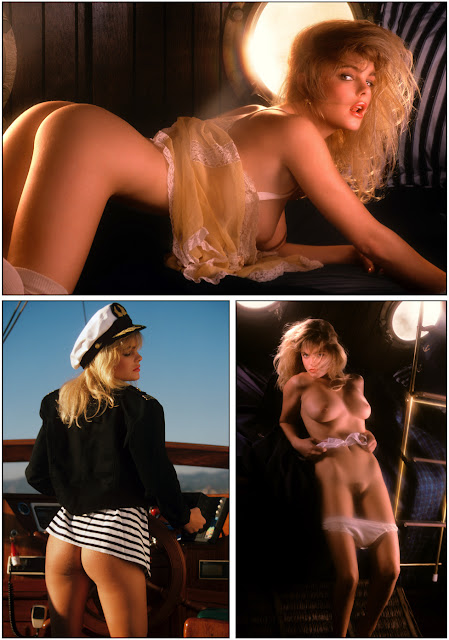 Clearly, we were meant to be together.
How fucking weird was it that this issue of Playboy that I was most aware of was the one handed-down to me by a fellow pervert?
I had no interest in Baywatch at the time, I'd yet to see The Blob remake, and I didn't really grow up with E.T. To me, this mag was a sacred tome depicting the star of Under Siege in various stages of undress in nautical settings. 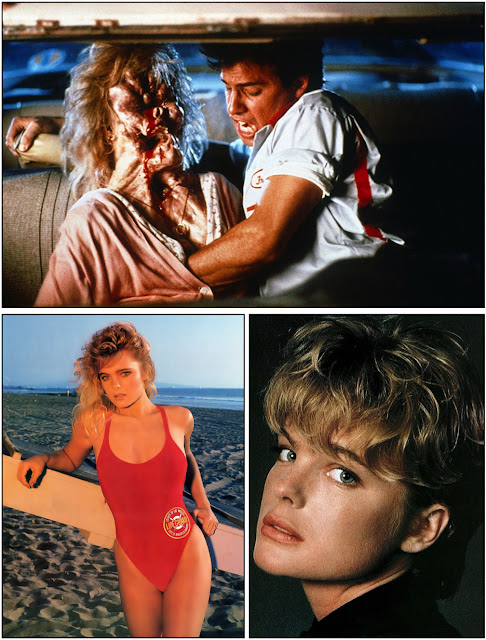 And, of course, what did I do with this holy collection of contemporary adult art and literature? (No, not that.) I cut it up, because I was 11 and I was an idiot and whenever I got my hands on a book or magazine that contained striking images, I'd extract them from their bound, concealed crypt and assign them a more readily-visible location - usually my walls. Though this material was slightly more provocative than my usual bedroom decor, and I wasn't too naive to take some precautionary measures, like, "From now on, no one go in my room." This ominous, transparent plea really didn't have a lotta distance, and before too long my father calmly asserted that perhaps full-frontal centerfolds were too confrontational "in the house." A fair observation from a grownup not on the cusp of puberty, and so these scraps of glossy nudity would lay dormant in the retired Trapper Keepers of bygone grades, thus cancelling out the emancipation of these images that I'd initially proclaimed.
And so that was the tragic end, more or less, of my first Playboy: crude trapezoids of magazine paper stuffed into last year's Social Studies folder.

After that, who knows...? Filed away for well over a decade, I'm sure, until the integrity of the paper (as well as any discernible function beyond nostalgia) had simply withered and died. By then the contents of this and all media were on full display in the World Wide Web, which, admittedly, led to a sort of laziness/acceptance in not acquiring the physical media that was once so sought after. And the very inkling of this attitude that I had for a short time has radically changed in the past ten years or so -- tangible art keeps me rooted, and I get the shit whenever I can get it.

I'd told this story - the Playboy story - to Jess probably too many times over the years, and she too fully understands (only too well) the emotional weight of childhood equity, the strength of ephemera, and the various Rosebuds and security blankets that are often necessary to nurture into adulthood to maintain an unmolested timeline. I have a small but solid percentage of these trophies - some since birth (god bless my Mother), while Jess has next to nothing, and her grief is real and valid. Because of this, she's able to empathize with my own loss(es). So, like a true soulmate, on Christmas morning of 2018 she gifted me an original, pristine copy of the July 1989 issue of Playboy Magazine.
Because of her, a piece of the puzzle that never should've been absent had been reconnected into my definition. 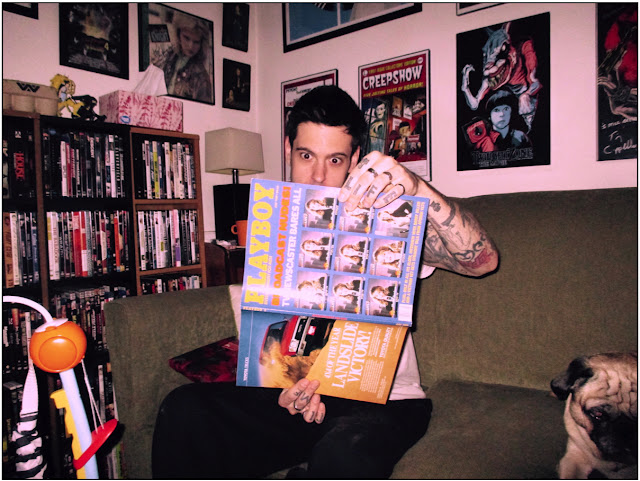 Truly a great Christmas present - I drifted off to sleep, pranging ducks on the wing and getting off spectacular hip shots.

As an adult-- er, the grownup version of myself, rather, I've gained the full maturity to leave all books and magazines in tact (obviously). Not the most heroic accomplishment for any person - but still, there'll always be that lust to decorate, to display, to adorn with the delights of aesthetic bliss. And let's face it: the best & most interesting art lives in books and museums, and I'll no longer be an art thief in either capacity.
But, the chain of command goes: if I can't express my interests in my living quarters, then it goes on a t-shirt, and if that fails (sometimes catastrophically), then it goes on me. 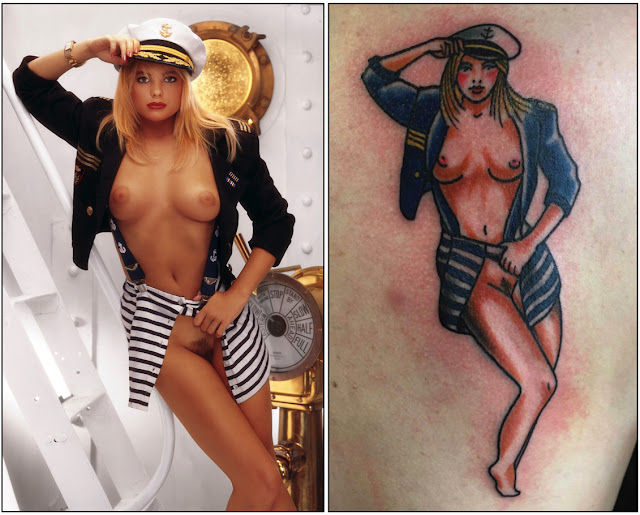 I forgot that Playboy was also in Under Seige. Been meaning to see that one again.