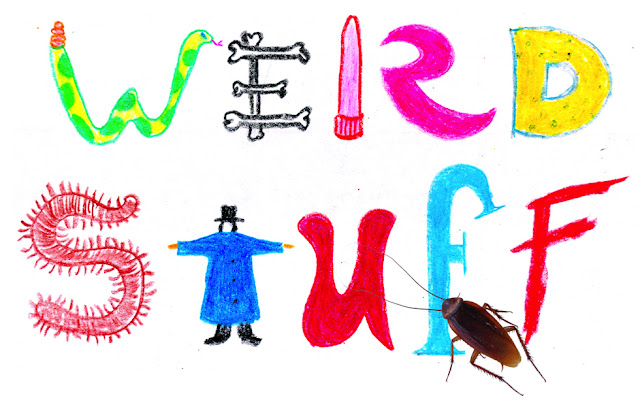 I run cold. I feel cold for most of the year - that's why summer is such a merciful blessing (and even that temperamental season has been known to let me down). Though I'm pretty sure I've never been as cold as I was on April 6, 1988. 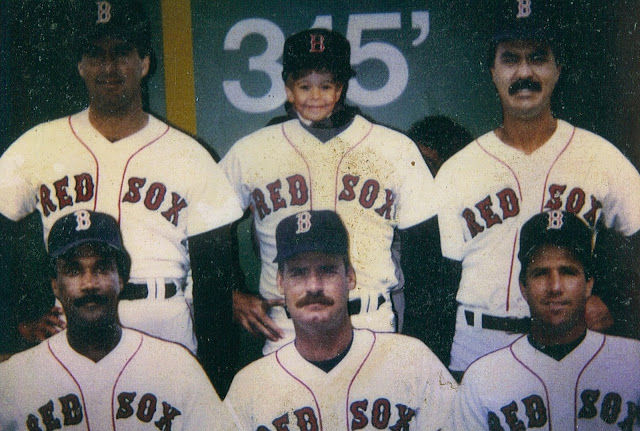 It was my first Red Sox game at Fenway Park, and it was bigger and brighter and greener (and colder) than it'd ever been at home on TV38. We'd arrived irrationally early (as we did for any scheduled attendance) - early enough to sneak down to the front to watch warm-ups. And as cool as it was to see folks like Oil Can Boyd and Wade Boggs come to life, I was mostly taken with the crisp, white uniforms and the bright red numbers - particularly #20 -- again, not because of the ballplayer wearing it, but the number itself. It'd already been a favorite number of mine: I liked the curve of the numerals and the way they looked next to each other. And a $20 bill was like the largest denomination to a 5-year-old, so it had a wholeness to it. But to see it contrasted against that glowing uniform gave it a nearly psychedelic dimension. 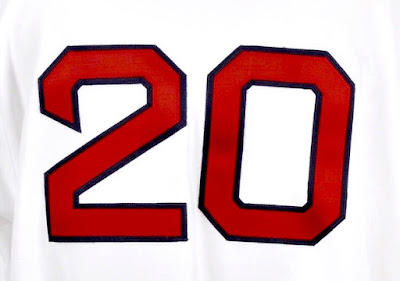 And it was the first of several coincidences that my attention was fixed in that direction, and shortly before the game was about to begin, #20 strolled over to me, and placed the practice ball in my open hand before jogging back to the dugout. It was the most American, Norman Rockwell-type thing I'd ever experienced; the stands were lined with fans & plenty of other kids my age, but somehow I won this voluntary lottery. Those around me who had a deeper knowledge of the lineup informed me that #20 was John Marzano, the Sox' catcher.

I spent the rest of the game trying to be excited about what had transpired, while also trying to keep an eye on the guy who made my inaugural baseball game that much more memorable. But it was too damn cold. The team was getting crushed by Detroit as the sun fell, so it just got colder and more depressing as the evening pressed on. But the ball was the thing, and the number 20 now head greater context.

We left early, and of course the Sox came from behind and won the game. Didn't matter - no one was able to endure that weather, and we were happy to leave and be warm.

The End? Please. Now the question in my life was, "Who is John Marzano?" Pre-internet days left me with the Sports pages, televised Sportscasters, ballpark programs, and the best and most useful to me: trading cards. I can't be sure if this incident is what sparked by obsession with card collecting, but I certainly wasn't eBaying Marzano cards in '88, so I was forced to buy packs like folks did - only hoping to get that one I needed. Topps, Donruss, Fleer, Score, Bowman, and the rest were consumed at an alarming rate - to the point that my interests began to expand beyond the initial quest. But that's another story...
I'd acquired a handful of different Marzano cards very quickly as a result of this blitz, and each one was a pristine trophy that acted as a reminder that what happened actually happened. 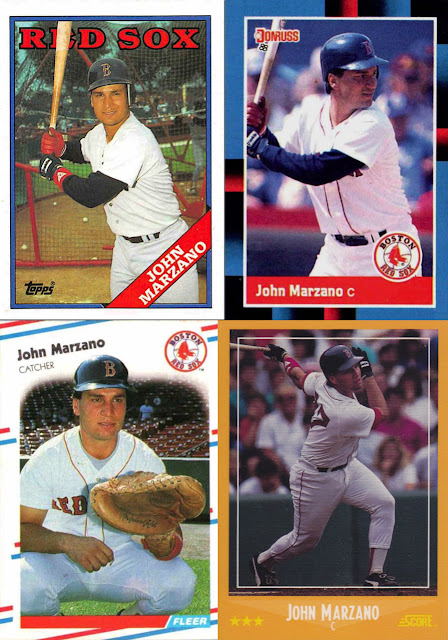 Cards always provided player statistics - which were of some relevance to me - and some even had some biographical stuff. But beyond the batting averages and RBIs and Minor League background, some sports cards series included players' birthdays, and John Marzano's happened to be February 14th -- which, as it happens, is also my birthday. Now, to anyone, it's always interesting or even exciting to share a birthday with a celebrity, but to a child it's just too cool. And how weird? What were the odds that a famous person I'd actually kinda met had my birthday...? But this exclamation point only lasted seconds, as the real weirdness gradually came into focus: Marzano was born in '63. I was born in '83. To the day, there was exactly 20 years between us. 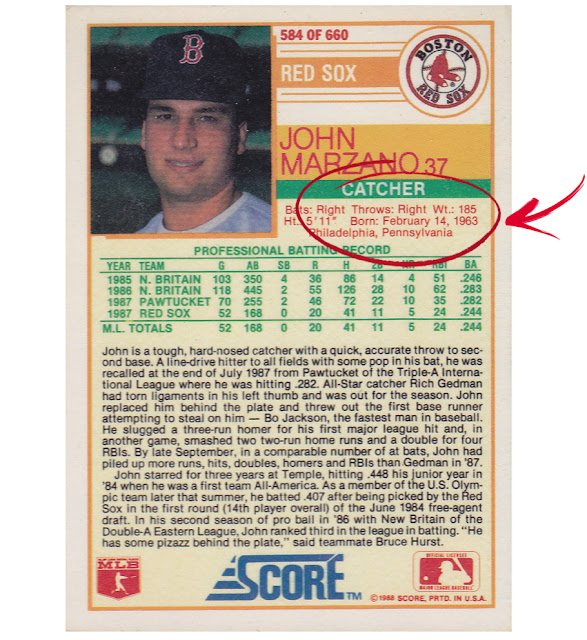 What the hell... why? 20? What was the relevance of this? Was there any? The numbers on their own were an astronomical coincidence, but I'd interacted with this man, this stranger, in what was already a serendipitous circumstance. Why, out of dozens of kids within his reach, did he hand me this baseball? Why did the number on his back indicate the precise period of time between our births? This is a mesmerizing beehive of psychic energy when you're 5, but as an adult, it's only become more confounding. Like Roy Neary is Close Encounters, I was aesthetically drawn to this number for reasons that weren't entirely clear to me. And when it suddenly inhabited more meaning, it somehow simultaneously carried more weight and became less clear.

Was the number relevant, or was it the man? Which brought my attention to the other? John Marzano died at the age of 45 on April 19, 2008, supposedly from falling down a flight of stairs alone in his home. Are these dates or numbers meant to be important to me? What about the mysterious cause of death? Is any or all of this an ominous prediction of my own fate? I should note he died exactly 20 years to the month of our brief encounter. Is that also important? Will I only live to be 45 years of age? Or worse: what will the year 2020 bring for me?

And while these strange things happen all the time, I'm often moved to believe that some kinda knowledge was being imparted, while at the same time, I feel inadequate in my perception, because, in the end, I've learned nothing. Nothing notable happened to me at the age of 20. Same goes for the year he died. The connection doesn't hafta mean anything beyond the connection itself -- but there is one, and it appears to be inescapable.

If I should fall, remember what you've read here today.