FRIDAY THE 13th - A NEW BEGINNING :: The V Best Things About Part V 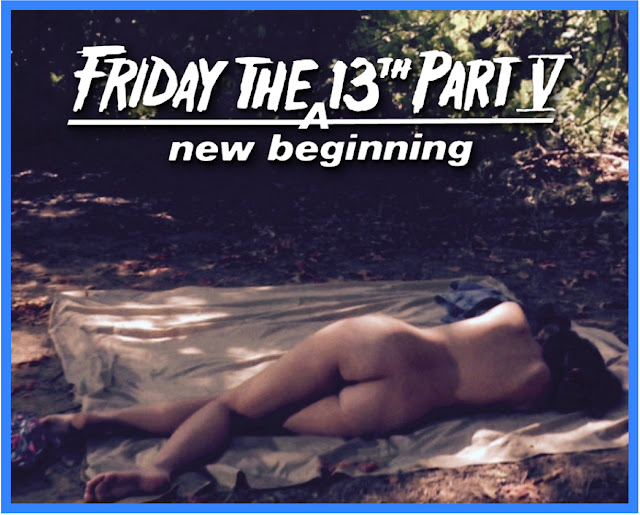 I'm not particularly a fan of this franchise, but I do feel like Part V is when they started to get a good rhythm going: parodying the previous films and setting a snappier tone for the ones to follow.

Apparently it's the black sheep (though I think this series has way more than just one). But believe me: it may seem like I'm always rooting for the least popular entries of things, but you'll never hear me advocate any Hellraisers post-Bloodline. But I digress... And so does A New Beginning!

It's an intermission. A side story. A break from the norm (sorta). All barometric ranking and cultural relevance aside, this is the real meat & potatoes of what makes it considerably better than most Friday films. 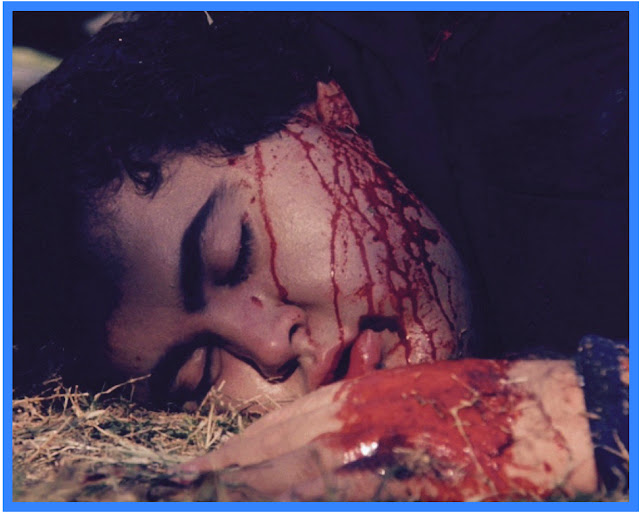 Jason is dead. Or is he?
Yes, he definitely is. But probably not.
At any rate, somebody in a hockey mask is killing the cast of this Friday the 13th sequel, which usually points the compass at the unstoppable Mr. Voorhees. But if he certainly maybe died in The Final Chapter, who else could it be? As Fangoria asked back in '85, "Is it the undying Jason, or is it Memorex?"
On paper, it's the first engrossing idea the series had put to us.
While Part One is most likely my least favorite entry, one of its stronger characteristics is that it's a whodunnit - which would be something you could never get back once they'd established their lucrative 'hero.'
And alas, it wasn't Jason - it was, indeed, "a new beginning."
Most felt ripped off - I probably did too at first (though I felt that way throughout each installment). But once I reached the realization that Jason just wasn't that cool (or just hadn't reached his fullest potential) his absence didn't hinder this particular movie. But in a seemingly endless string of boring stories with boring characters, he was the most colorful thing going.
For whatever flaws Part V has (and, oh man, it has plenty), it's commendable less for the story it tells and more for the fact that it didn't tell the same story for the fifth time in a row. Somewhat in the bloody vein of Elm Street 2 and Halloween III (two monumentally superior films) they took advantage of the fact that their series' label was never tied to any one concept or character.
Who knows, "Friday the 13th" coulda been about angry parents seeking revenge for their slain children. 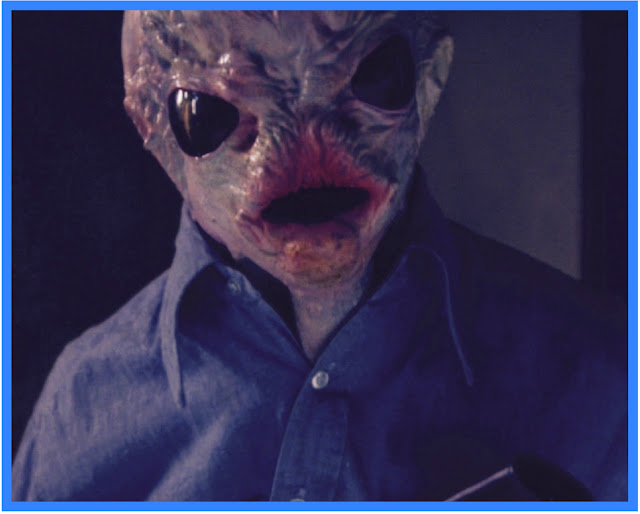 The script for Part V was banged out in three weeks and had gone into production while The Final Chapter was still killin' it at the box office. This, generally, is the recipe for: a weak sequel, some easy money, and just an all around bad motion picture - and those brush strokes are visible all over this thing. But big studio greed had its advantages here: while the previous installment was roughly 5 minutes old, it helped keep the 'storyline' (a term used so very loosely) fresh in the minds of audiences and filmmakers alike.
The joke, of course, is that the movie is so often damned for its careless deviation from the original thread that no one wanted anything to do with it. And my own inside joke is that it's the smoothest continuation in the whole series; after Jason's constantly fluctuating age, build, hairline, physical health, and overall motivation, they kept good on his then-current status of "deceased."
Plus it was entirely innovative for these particular movies to have a main player - Tommy Jarvis - spill over from one installment to the next and remain an integral character for the duration - eventually bridging not two, but three chapters. 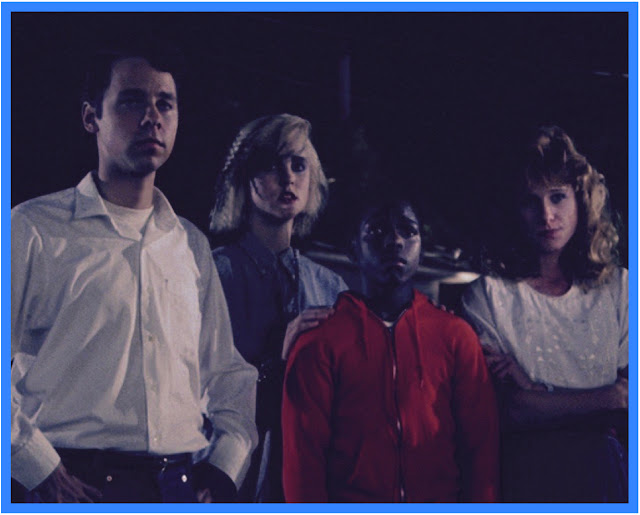 The fun irony of A New Beginning is that, for the first time (maybe ever), there actually is a linear premise in the world of Friday - and none of these characters are involved in it, and some aren't even aware.
There's nothing new about parading out a sacrificial lamb to set the tone of each film, but this entry is full of folks who pop in for long, drawn-out subplots only to be killed (usually in MPAA-friendly ways). And because the plot remains as much of a puzzle as the perpetrator at large, the movie adopts an almost Altmanesque structure in which characters can play out their own little vignettes:
A pair of "don't ask, don't tell" punkers named Pete and Vinnie get caught in some car trouble before their demise.
Billy - a sleazy mustache, and Lana - a braless waitress, groom for a night of mid 80s excess that never happens.
An amorous couple - Eddie, and the very lovely Tina (who could be the sixth best thing about New Beginning all on her own) - have safe sex before simultaneously succumbing to severe ocular trauma.
Local hicks Ethel and Junior continually tempt fate by being the most obnoxious moving targets in the movie (and maybe the whole genre itself).
But the fan favorites have apparently always been the doomed duo of Demon and Anita - their popularity most likely due to the perfect storm of enchiladas, some improv R&B, and fashions by DeBarge.
Some of these characters cross paths, some are connected to others, some only exist in their own little movie.
While there're long periods of no attempts at suspense or story, the movie sometimes plays out like a character study. Gone (for the most part) are the generic Crystal Lake campers, making way for the zaniest cartoon caricatures in the whole franchise. 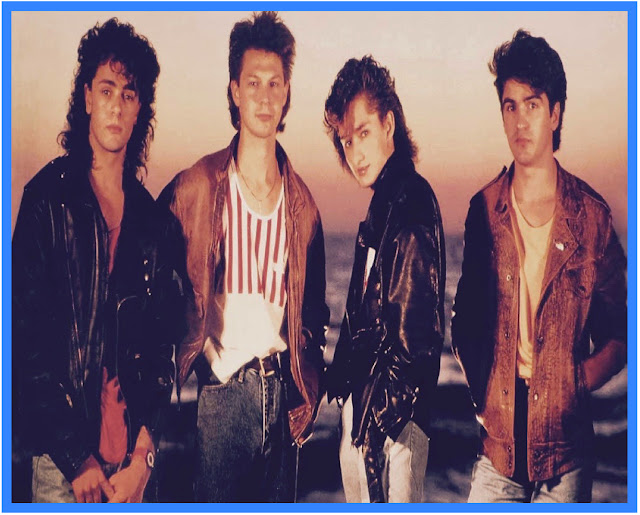 Another accomplished 'new beginning' was shaking off the cobwebs of the 1970s that was so palpable in the previous four flicks. Part V drops us square into the 80s, complete with some sinister dance pop from Pseudo Echo, accompanied by some of the fanciest New Wave moves courtesy of Tiffany Helm (apologies to Crispin Glover).
The Elm Street movies were categorically aces with hip songtracks (the first Nightmare wasn't even in theaters when New Beginning went into production) and the Friday movies never bothered to hook onto that trend in an engrossing way (apologies to Alice Cooper). Even still, the scene itself (like several in the movie) helped to chart a new course for the remainder of the series - even if it was less of a new direction and more of a lane change.
And it's a great song to have around during this season. 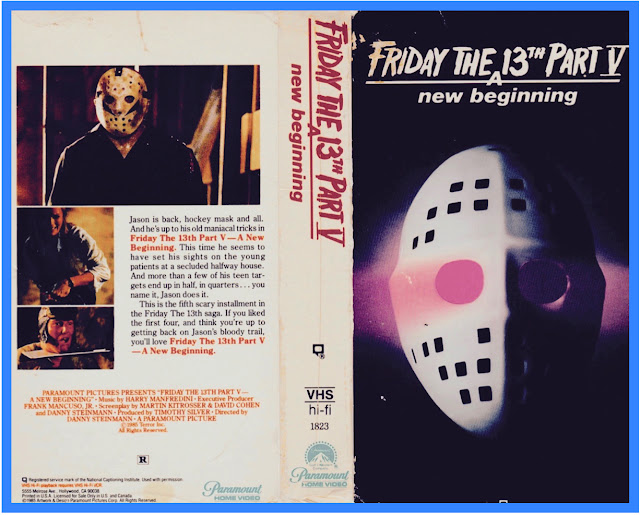 Old video covers carry a lotta nostalgic weight - especially in the 'horror' aisle. All those devilish eyes peering out from the shelves into my innocent young soul were clues to the mysteries of their cathartic pleasures.
Although, as I've mentioned before, having seen them all now, none of them ended up being as scary as the scenarios I'd envisioned in my unpolluted mind.
It's not the coolest artwork - it's not even the best of the Fridays (that belongs to Final Chapter's elegant knife-through-the-eye on solid black), but it's a close second. The unblemished, fresh-outta-the-box hockey mask with the new design (that doesn't appear in any movie) and red laser eyes are all a perfect, symmetrical, visual analogy for the idea of "a new beginning." And even though the image is clearly a marketing afterthought, its generic overtones help to make it a broader symbol - not just for Jason, but all 80s slasher movies.