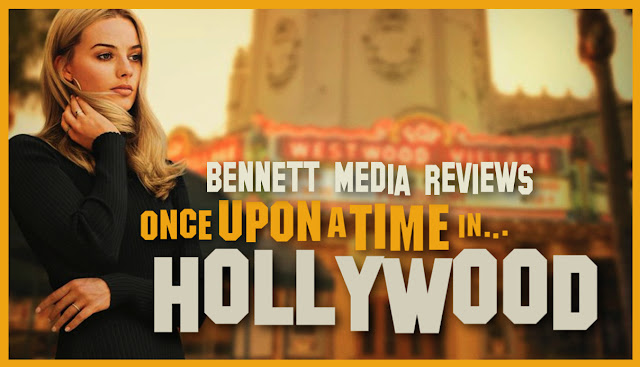 "Indulgent" is so often used as some kinda put-down, though it's really just an observation - and a misguided one at that. After all, if that isn't the singular characteristic of art, I don't know what is; I can't imagine folks like Van Gough or Salinger catering to critical or commercial success.
So, there's that.
And if you've read or will read any press for Once Upon a Time in Hollywood, the phrase you're going to see over & over again is "love letter" (and now, readers, you've even read it here), and despite whatever other words you wrap around that, that's an accurate (if not lazily obvious) observation. But the punchline here is that the phrase describes Tarantino's entire body of work, which makes it laughably redundant to point out yet again.
So, there's also that.

The movie isn't just for Quentin fans (no good movie is that esoteric), but if you're at all familiar with his stuff, you'll get what you paid for and then some. That's not to say he's become entirely predictable (though there are major plot developments that didn't come as a huge surprise to me), but he clearly doesn't intend on too many lateral maneuvers in his career. Folks, what I'm saying is that he's been consistently good, and we can nitpick the details (because, let's face it, he's continuously blessed us with an endless array of details), but in the end, he's yet to truly slip up.

This movie is not the exception. 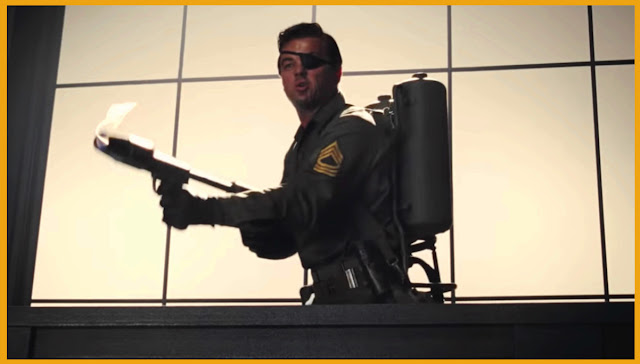 I liked it more than Hateful Eight - though his Western phase hasn't completely left his system. But, then again, that's part of the prize: his obsessions become ours - either for the duration of the film, or as much as we choose to take with us. Having said that, there was no way he would accurately depict the last gasp of 1960s Hollywood without diving deep into the decline of the genre (especially on television). And deep we do dive into those aforementioned details: not just into fringe-jacket-cowboys with sideburns, but the entire Hollywood machine of that particular moment in time.

There are huge, sprawling wide shots of city street that are painstakingly dressed in vintage cars, period clothing, and recreated storefronts that overwhelmed my eyes simply with the magnitude of production value. So rarely nowadays do I marvel at the craftsmanship of a shot (no pun intended, though it may be a Freudian slip). And that's just the big stuff; the movie is packed wall-to-wall with decor and technology, product packages and magazines, TV and radio commercials, billboards and movie posters - all of the period, all of the time, all creating a sensory bombardment of the most decadent nostalgia since Forrest Gump. (Go figure.) Most movies throw us some funny hairstyles and a couple pop songs and we're supposed to be magically whisked away to whenever their story takes place; this movie is relentless in its vibes - largely because the desired effect isn't to necessarily place us in that time, but rather perpetuate the momentum of the idea that this is, fer sure, some kinda fairytale. A "love letter," if you will. 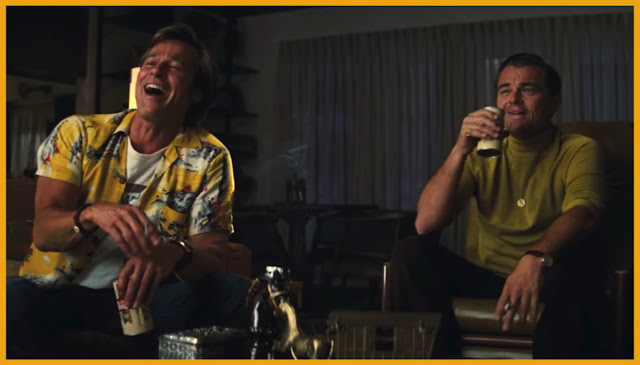 The movie isn't all TV Guides and beer cans; it has countless other strengths (and some weaknesses).
At this point in life, hasn't it become tedious to call attention to the more-than-competent skills of Brad and Leo? Still though, it's hard to ignore that simple fact that both of them really manage to transcend their usual efforts when they let Quentin take the wheel.
And, again, this movie is not the exception.
The two actors play a "duo" in the most primetime television sense of the word: Leo is Rick Dalton, the pampered film & TV star who's struggling (with a viscous degree of intensity) to remain relevant in a changing world. Brad is Cliff Booth, Rick's stuntman, wingman, and compadre who, without the comforts of the moviestar lifestyle, struggles with nothing, appears both physically and intellectually indestructible, and just seems to have it all figured out. And, refreshingly, there is never a conflict between the two chums. More than brothers, but less than a wife.
If these sound like caricatures, they're not - not in a Tarantino movie. Pshaw! What they go through is less of a traditional character arch and more of a magic show: both characters, as honest and raw as they're depicted, really only show us one card at a time, until it dawns on us that they've kinda been a coupla Clark Kents the whole time - eventually revealing to us the American folk heroes they'd been all along; keeping in line with the suggestion of the fantastical.

The most pointed element of this supposed storybook is the "character" of Sharon Tate, whose main function is to literally dance & twirl around the edges of the movie like a live action Tinkerbell. There was and is a sorta unanimous observation that Margot Robbie is given very little to say or do, but even after one casually perceptive viewing, it feels pretty clear what her purpose is in this "once upon a time" structure: she is the most important player in the story, because she is the Princess in need of rescue; she is Sleeping Beauty, unaware of the dangers lurking and transpiring around her. To suggest she deserved more screen time or added dimension would've ultimately made it an entirely different story altogether. Also, I think y'all could be more respectful to Ms. Robbie's craft as an actor and her intelligence as a person for taking a role with the understanding that her mere presence would simply be symbolic, and that's a game she'd have to bring (and she brung it). Besides, I don't think her sparse screen time will hurt her career at this point.
In the end, I think Margot will be just fine... 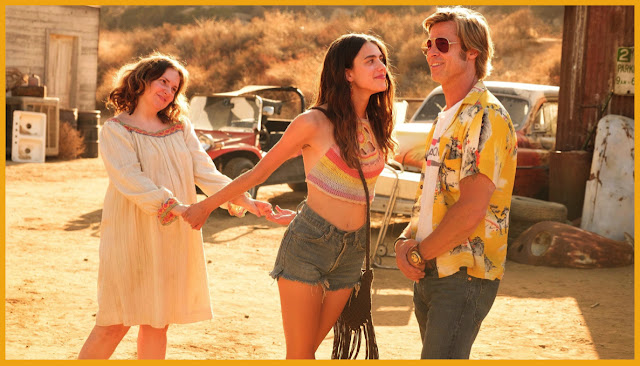 Quentin still loves his onscreen text and title cards (Thank God this wasn't broken up into chapter titles), but his usage was minimal here. Additionally, he employs two other clunky gimmicks he's not shy about using: timestamping and voiceover. My least favorite segment of Jackie Brown was the money exchange at the mall, structured out by showing the hour & minute in the lower third of the opening shot of each new scene - a bizarre bit of exposition from the Pulp Fiction guy. I hated it, and it confused me more than it informed me. He uses it here again in Once Upon a Time for the purposes of tension and "historical accuracy," which ultimately became a confrontational dare to the audience - a lazy manipulation of a red herring. It was a cutesy, amateurish practical joke - and aesthetically, it looks like crap.

I've got a love/hate thing with voiceover (yes, it's both extremes). For my taste, it can be done right or it can be done wrong. When it's used sporadically to explain a small handful of expository scenes, that's wrong; it's a benign imperfection that, were it removed, the scene or sequence would only be improved - heck, it'd probably make it more comprehensible without. By my count, he's done it in Basterds, Hateful Eight, and now this, and each movie has suffered for it.
Nitpick the details. 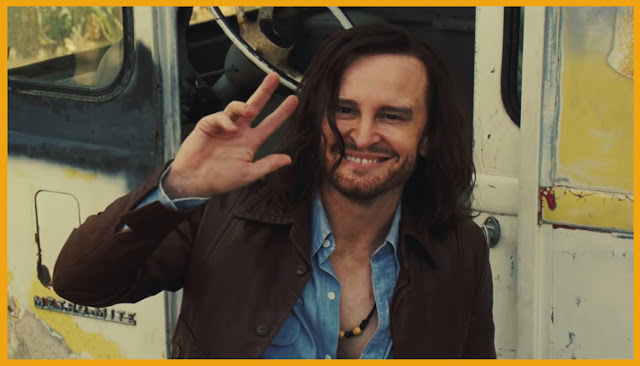 My favorite Tarantino movies have been Pulp Fiction and Death Proof - for many reasons each, but a big one is their strict simplicity. The guy can clearly do big action and layered epics, but we're getting way into personal taste here. Point is, Once Upon a Time in Hollywood is an ambitious balance between the two sensibilities. In fact, I wouldn't be surprised if Brad & Leo's characters were a conscious metaphor for the marriage of the two extremes.
He's made a small, intimate picture with dozens of speaking parts, historical context, the longest soundtrack he's ever compiled, and too many shooting locations to count. I'm not sure that it's the best marriage, but making it work for the rest of our years should prove to be a lotta fun.

Loved reading this. Thanks, Paul.