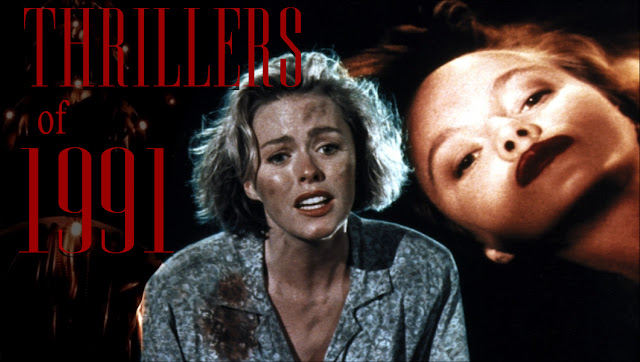 What were the things that scared you when you were 8 years old? If you're anywhere within my age range, you know the D.A.R.E. Program - a prevention initiative that not only warned us of the damage of dope, but also the dangers of strangers. As a kid, I was assured that a van would pull up alongside me and the driver would dangle some Suddenly S'mores in my face in exchange for some company. And they did such a good job of convincing me of this that I felt adequately prepared to the point that I was hoping it would happen, just so I could tell that perv where to stick that Nabisco treat.
So as I lay trembling in my bed each night, it was not for fear of kidnapping or home invasion - that would've been excessively unrealistic. No, my biggest concern was still, after however many years, child murderer Fred Krueger. I didn't care that magazines and TV commercials were claiming that he was Dead - that never seemed to stop him before. The point is that 1991 wasn't about fear of the unknown, but rather a corruption of the world we're already familiar with; a threat to our comfort and safety. (And I'm not talking about the Gulf War.)
I'm not sure what prompted it, but 30 years ago there was an excessive outpouring of Thrillers - an admittedly broad genre with a name that can be used kinda loosely. There's usually some action, some sex, some horror - or at least suggestions thereof. But there's always suspense, and that was the biggest draw for me. 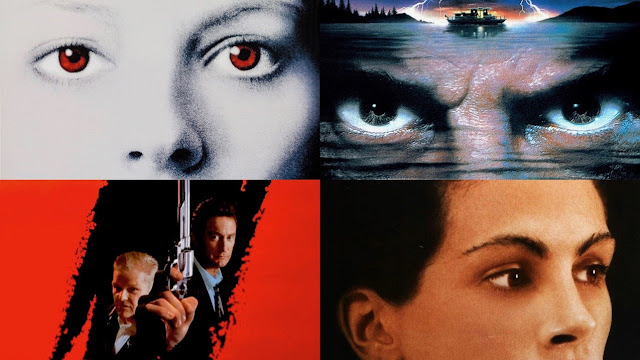 When I tallied my favorite movies from this particular year, I included four films that I feel fit the label -- heck, if I remember correctly, they carried a physical "Thriller" label on their box at the video store. FX2 could be a bit of a stretch - while it's sort of an Action/Comedy, there isn't a big enough serving of either, while there's plenty of goons with knives & uzis lurking around, a drive-by shooting, some double-crossings, and "simulated"(?) nudity. Despite the body count, it's pretty lighthearted -- unlike, say, Scorsese's Cape Fear. Speaking strictly in terms of excitement, anxiety, and brutality, I'd say this melodramatic remake is easily the most thrilling Thriller of the year. But what it makes up for in cold sweat and grotesque carnage, it lacks in any hint of subtlety, which is why The Silence of the Lambs is the movie to beat (and it can't be beat). People in the "Horror Community" (which is deserving of such an obnoxious title) love to assert that Lambs is, in fact, a Horror movie - if for no better reason than to have such a prestigious film under their tent. But to call it that would be to dismiss the notion of the "Thriller" brand entirely, as the movie practically defines it. And to reiterate: in a year packed with silimar fare, it still managed to be the clear champion (for the year, for all time). Meanwhile, for the crowds who couldn't dig paroled rapists and fugitive cannibals, there was Sleeping With the Enemy - even the very title personified this whole theme of compromised trust. Though even when I was 8 years old, I thought two things: that's an awfully provocative title (it's euphemistically Having Sex With the Bad Guy), and man does Julia Roberts look cute with a mustache. 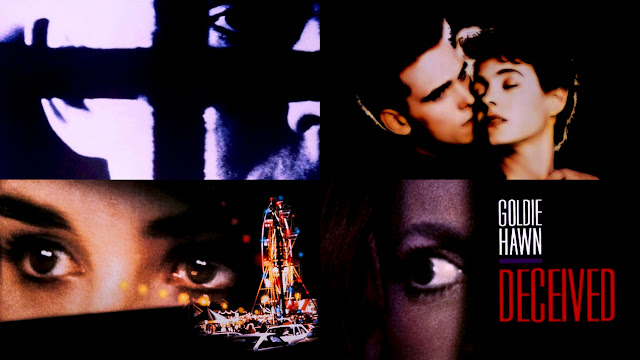 The concept of 'strong women' was not unique to 1991 -- heck, it's practically a symbol of the genre. Still though, so rarely are we blessed with certified Cinematic Heroes (of either sex); while not necessarily a Thriller, Thelma & Louise provided plenty of pop culture competition for Clarice Starling. But this year had so many deep cuts - maybe even some Movies You May Have Missed - that there's a whole mess of heroines and heroes alike that deserve a spot on the mantle. Goldie Hawn was no stranger to Drama - or even Action - but Deceived had her sleeping with her own enemy: everyone's favorite apathetic dad at the time, John Heard. It's a Mystery that unfolds in a painful way, with a climax that surprises and soothes so sweetly. Mortal Thoughts finds Demi Moore and Glenne Headly in a Thelma & Louise situation, but without the sass (and a less sympathetic Harvey Keitel). Sean Young can't seem to catch a break either, as she discovers that Matt Dillon is, predictably, not the man she thought he was (literally) in A Kiss Before Dying. In several instances, these movies were lite on violence and gore... until the end, and then nothing was held back. It's hard to say if it was my age at the time or if it was legitimately expert storytelling, but all these films typically had impactful resolutions. Conversely, Ricochet is wall-to-wall lunacy; it's so stressful and violent and dirty that it felt like a grindhouse movie before I knew what grindhouse was. If you need further incentive or a better description: it's from the director of Highlander and the screenwriter of Die Hard. There. 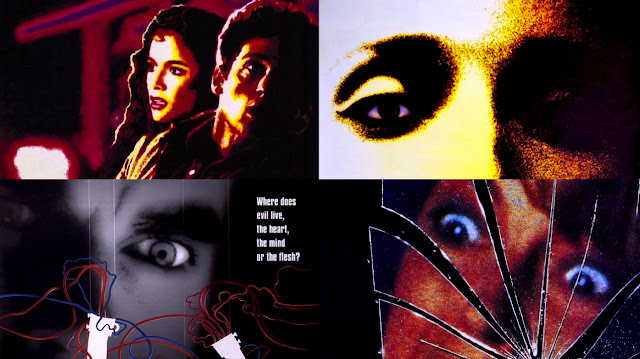 Speaking of "dirty," if I had to nominate a major Erotic Thriller from '91, those damp panties would belong to Shattered. Easily one of the most ingenious Mysteries of the year, it's also drenched in sensual melodrama; the music and cinematography and the performances and even the story itself is just pure sweaty passion. The twist here is that Tom Berenger may not be the man he thinks he is - which, coincidentally, is also the plot of Timebomb; a sorta SciFi Actioner that's just weird and confusing enough to fall under the "Thriller" stamp. (Honestly, anything with Patsy Kensit is thrilling.) It's definitely one of the more far out entries on this list, but it's still rooted in that whole 'breach of trust' issue. Same can be said for Eve of Destruction: a cyborg-gone-rogue tale, except the cyborg looks exactly like scientist that created her (Renée Soutendijk), so it's able to fool her family into an inevitable hostage situation. Further down the line, past Science Fiction, is the Supernatural Thriller Body Parts (which, as you can imagine, has some Body Horror hallmarks). By today's standards, the premise feels kinda tired: organ transplant recipients receive limbs from a serial killer, so now they've also inherited his bloodlust. That allows for a bit of fun, but the real rollercoaster is the reality that Jeff Fahey and Brad Dourif have scenes in this movie together! That much filling in one pizza roll will burn the roof of your mouth.
In the world of Cinema, we can suspend our disbelief and succumb to actual tension over haunted arms and robot moms and secret identities, but nothing thrills like reality. And in real life, a major source of strife and savagery is the police. Bad cops. Dirty cops. But every once in a while, along comes One Good Cop who robs the local drug lord to support his dead partner's orphaned children. Only an OG Batman would walk that line. But that's really more of a Crime Drama - the real thrilling scenario is when all cops are bad. When the world is against you and the law is not on your side. No one to protect you, no one to trust. That is the world of Run, where Patrick Dempsey has landed himself in the darkest corner of The Twilight Zone through otherwise benign circumstances. I'm not sure of the last time I saw the movie (maybe '91!) but the whole tone and the premise felt timely and accurate; as sheltered as I was as a child, these movies were preparing me for an inevitable breakdown of the system - I didn't become entirely cynical (nor did I think Max Cady was gonna bite my cheek off), but I became acutely aware that certain disappointment was always around the corner.
So what prompted this little spike in the spectrum of Suspense Cinema? In terms of box office, the biggest movie of the genre was Fatal Attraction in 1987 - four years earlier. The influence certainly didn't come from television: Doogie Howser and Major Dad didn't leave us with a lotta cliffhangers. It wasn't video games or comic books - that's today. Grisham, Clancy, and King (and Thomas Harris) were publishing their usual nail biters, but that was nothing outta the ordinary. Were we just tired of busting ghosts and dancing dirty? Was it more than coincidence that we kicked off a new decade with so much darkness? Baby boomers spent the 80s doing their best to reinstate the security and sanctity of the nuclear family (The Cosby Show, Growing Pains, Family Ties) - maybe the most relatable conflict in fiction at that time was to burn a hole in these superficial "values." If you settle down and start a family, you might get stabbed. Thrillers carried on throughout the decade, predictably focusing on eroticism and serial killers. There was a spark of originality that year that was ignited purely by circumstance; 1991 made this mood happen. The stuff that followed was mostly bland and derivative, and couldn't capture the same tone because the time had passed. So now, we're left with these illustrated artifacts from this brief era, and while the genre changed and fluctuated over time as much as any other, we can still feel it tickling.
- Paul