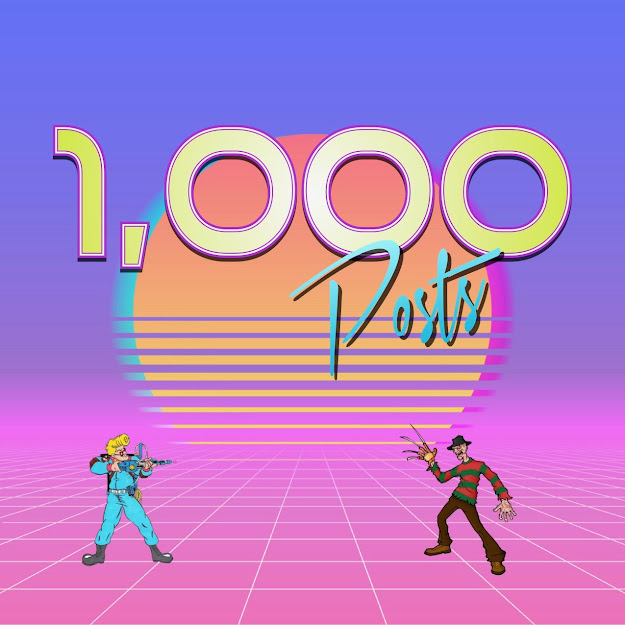 Looks like we made it.
Look how far we've come, my baby.
Gosh, it feels like just yesterday we were churning out trashy pop art and heroic prose about Punky Brewster. Goodness, were we ever so young? 1,000 posts, and every single one of them an artistic achievement in and of itself - illuminating the mind and dazzling the eye, keeping you safe while challenging you to embrace your own path.

I'm just fuckin' with you. What can we say? It's been real. Thanks for sticking with us through thick and thin (and if you didn't, you're probably not reading this, so suck a dick). But when we stand back from it, I think we're pretty pleased with what we've got - maybe even a little proud of one or two things. Just know that, at the very least, we've only ever put stuff together that we've found interesting, and we'll continue to do pretty much only that for as long as they let us. And let's face it: some things fell flat, some things may've been too broad or esoteric, and some things just drowned and sank into the internet abyss (sorry, WOWMANWOW). But please do know that it's very important and exciting to us when we're all on the same smutty page - otherwise we'd just keep a diary and be done with it.

But I'm not here to explain shit to you -- well, technically I am, but not shit you already know. I wanted to talk about something - it may mean something to you, it may not, I don't know, I don't know anymore. But I'm trying to set something up here, so bear with me...

Our name derives from Bennett Place, the street on which I grew up. Bennett Place was a dead end with only three houses, and we lived in the last house on the left. Next to Bennett Place is a little red schoolhouse called Bennett School, which was abandoned for the bulk of my childhood. Behind Bennett School is a small, patchy sorta baseball diamond that I called Bennett Field, on which I learned to hit a ball and ride a bike with no training wheels. Next to Bennett Field was a corner deli named Lein's Market, which I only ever referred to as Bennett Store. This was the place where I'd buy my Batman trading cards, Flintstones Push-Pops, Slimer Bubble Gum, and any and every other nostalgic piece of millennial youth you've ever experienced or read about here or anywhere else.

This was the formative bubble that shaped all that I know & feel, and by incidental design, I tied it all together with the name 'Bennett.' You have it too: however protected or disrupted your childhood may've been, I'm sure you can connect your dots into an image - geographically, thematically, however you wish. For me, growing up was video games and Christmas mornings, and I realize not everyone had it so good, but the major point here is that, if you're alive and reading this, you must've experienced pop culture in some capacity in your time on this planet, and you predictably formed opinions of it. That's all we're about. 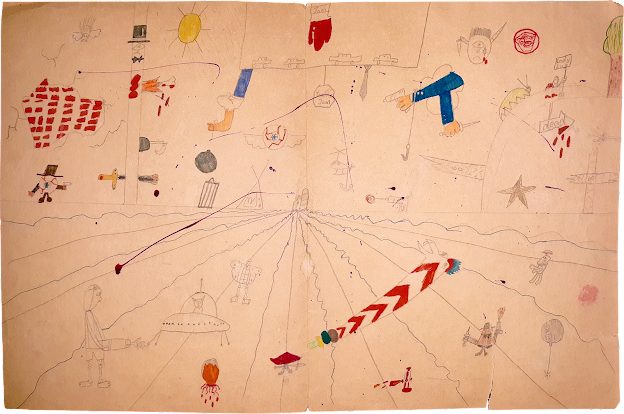 This? I don't know what this is. But I can explain what I do know - or what I think I know.

This was something I drew when I was... 8 years old? Maybe 7 or 9? Around there, I can't be entirely sure and it drives me a little mad. But anyway, what I am sure of (I think) is my life-changing experience of having just seen Dough For the Do-Do, the 1949 Merrie Melodies short. 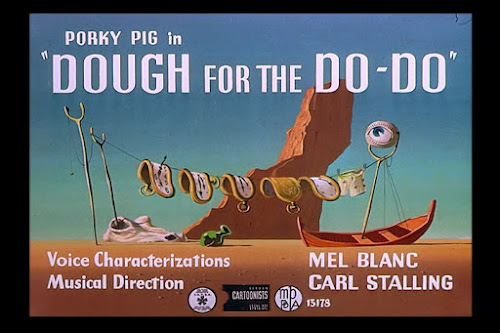 If you don't know it, here's the gist: Millions of dollars will be awarded to anyone who can find the last remaining Do-Do Bird, and so Porky Pig travels to "Darkest Africa" in search of the supposedly-extinct animal. (That's how I remember it, anyway.) Now, I'm not sure what Hollywood animators were trying to pull off with suggesting that this is what goes on in Africa, but I (as I'm sure every kid since the 40s) knew better. What I took from it was the surrealistic eye candy that it is: an artistic free-for-all full of cerebral carte blanche that allowed its creators and viewers to explore a made-up world that was clearly not an actual, terrestrial place here on Earth. In layman's terms: Looney Tunes on acid. 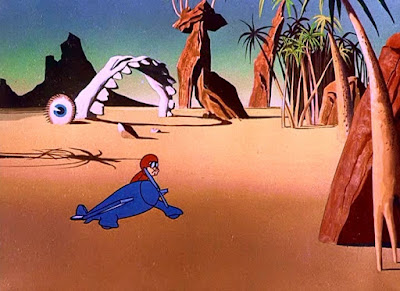 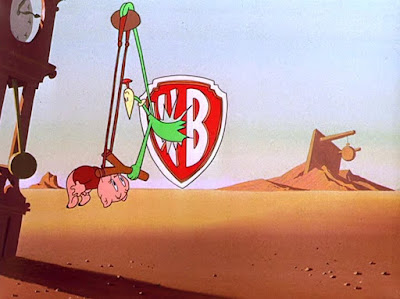 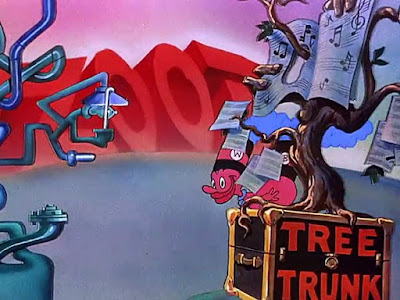 The plot of the episode mattered so little to me; I was too enamored with the setting. It was an aesthetic of sparse landscape contrasted by striking images and bad puns -- a vibe that would stay and has stayed with me, and eventually lead me to similar stuff in everything from Ralph Steadman to Ren & Stimpy. But at the time, my father alerted me to the most obvious source of inspiration for the short - Salvador Dalí - and from his vast literary library, gave me some material to look at. And that was it: I had to go ahead and make my own interpretation, my own tangible atmosphere that I could return to and explore at any time. And so, over the course of what was probably months, I constructed and added to and modified what would eventually become this.

So, that's what this is, in its most clinical terms. So now, as I rapidly approach middle-age, I think it's time to give it a larger context; assign a narrative outside of its initial story and give it more weight -- because I created it and so I'm allowed to do that.

I'm not looking to write a three-act structure here, but I think we can get away with some abstractions. Firstly, let's not forget that, while I was not a professional artist at the time, this still qualifies as "early 90s art," which is its own thing (and something we celebrate around here exhaustively). Porky Pig aside, most TV commercials - particularly food & beverage spots aimed at kids - pretty much used this same mood. So if we come at it from an advertising angle, I nominate to repurpose this as a two-page print ad for Bennett Media - the kind you'd find in a magazine (or, more appropriately, a comic book).

I'd initially planned to number and label every single detail in this composition, but I was struck with a mild fatigue when I thought about my end of that undertaking, and then became flat-out disabled when I thought about you having to read such a thing. Instead, here's a closer look at its contents: 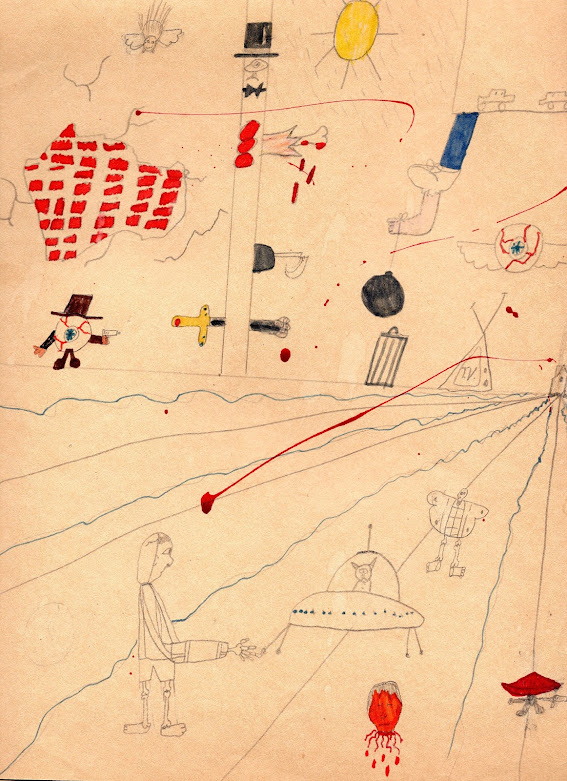 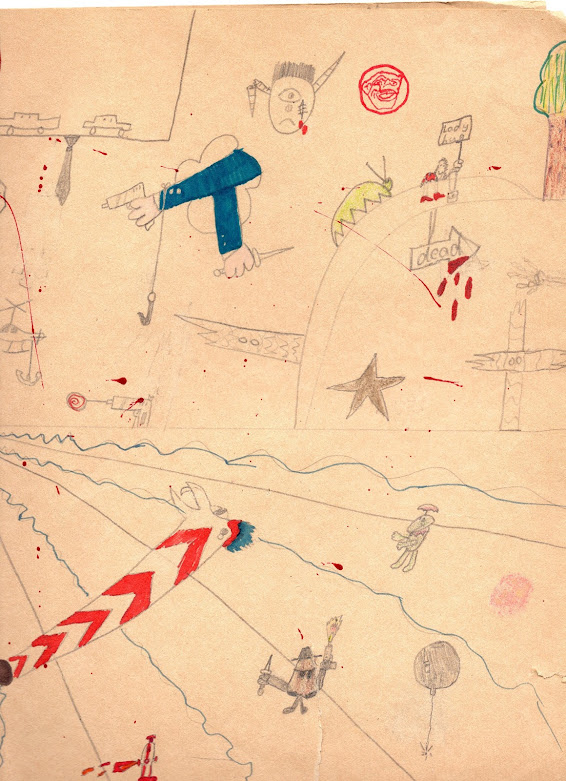 I thought, at the very least, we could give this a long-overdue title. So now, working within these parameters, I'd been leaning towards "Bennett Media Land"(?) which, clearly, is a mouthful, and the phrase "Media Land" is treading a little too close to "Circuit City." So I thought just simply Bennett Land. At any rate, I was thinking along the lines of "Candy Land" or "McDonaldland." I think I've always been attracted to the word "land." I've never been to a Disney-themed amusement park, but if I ever had a choice, I'd bypass Disney World for Disney Land any day of the week - simply for the name.

But enough of the cat-and-mouse shit. I'm sure I could go on and on (in fact, I think I already have), so let's try to wrap this up and solidify it with the idea we had that prompted this exploration. We've combed over this mosaic and nominated... the Bennett Media Mascot! So, here it is: The Private Eye 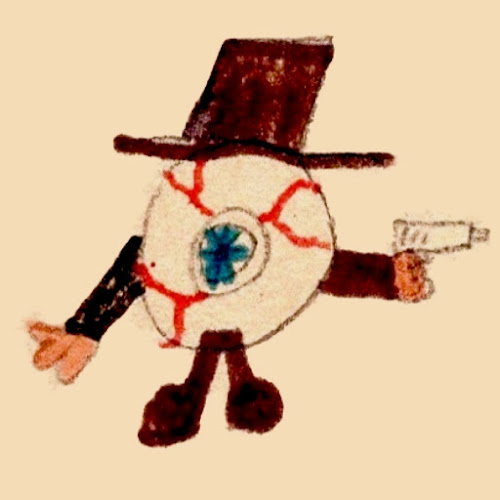 I don't know where I first saw this visual pun, but I'm sure I didn't come up with it on my own. Suffice to say that it encapsulates just about every decorative hallmark that turns me on, and it fascinates and excites me that this particular design was conceived and constructed during the time period on which this site is primarily focused.

So, who is The Private Eye? What does it do, what does it mean, and what is its main function? Well, I don't know if we're cutesy enough for some kinda origin story nonsense (we're not Dinosaur Dracula), but I'd certainly like to assert that Private Eye is a symbol of all you have just read and will (hopefully) read in the future. It won't necessarily have its own comic strip or anything, but I'm sure we can find a job for it eventually. And if you have suggestions... well, just hire The Private Eye!

Okay, so there it is. That's all we wanted to say: no real big changes, but mostly just a big thanks for joining us in this continuing outlet for our passions, and an extra big thanks for when you participate vocally. We know there's a lotta weird & negative stuff in the world today (and every day since the beginning of time), but we've never ever been about that. And even when we've touched upon that stuff in the slightest gesture, it's only ever been in the name of art, because the wisest and the best affix their attention on the good... and the beautiful.

For what it's worth, this is the only blog/site I follow with any kind of regularity (not including, like, IMDb and stuff).

Here's to a thousand more posts.