Shortly before I discovered the existence of actual nudie cards, I got by on the excitement of having cardboard pictures of women from other non-sports sets. But before I get vaguely weird and uncomfortably specific, I can say that the 'hero shot' cards were always the ones I was drawn to most - sports and non alike - more than the muddled 'action shots' that barely conveyed any kinda drama or movement. (Actually, I guess we're already getting weird and specific.)

Moving on. Let's take a look at 5 (actually, 7) fictional female characters who have been immortalized on paper and encrusted in stale bubblegum dust. 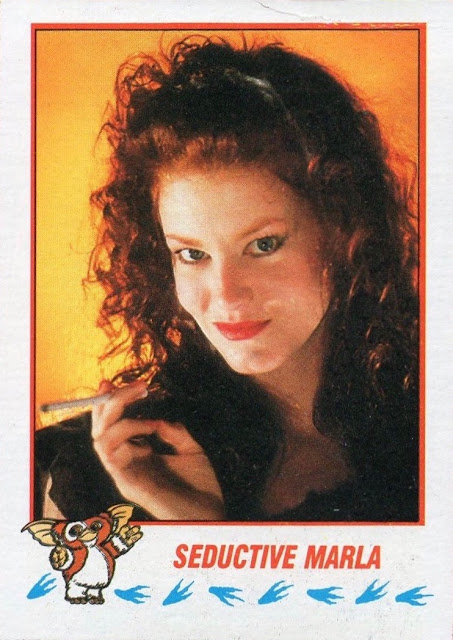 My favorite New Batch cards in order: all of the individual gremlins, then all the individual mogwai, and then Marla. For a lotta popular movies around this time, you'd see the same glamour shots used in their respective trading cards as you would in the films' series of posters you'd buy in the store. Gremlins 2 did not have such a line of posters, and even if they had, what do you think the odds are that this "seductive" home-wrecker would've gotten her own 24x36? In my heart I hafta believe they woulda just stuck with Gizmo & the gremlins, because the very thought that I could've had a Marla poster is too much to bear. 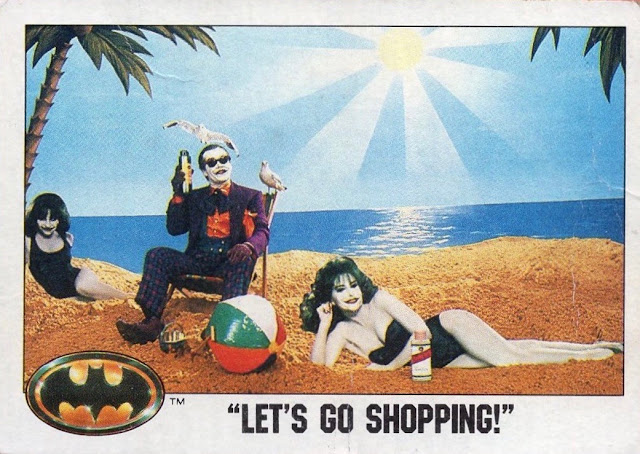 I didn't pay extra close attention to them in the movie, but represented on a tangible trading card forced me into an unquenchable infatuation with the bikini Joker groupies. I used to pick out my favorite cards from the set and keep them on me - not to really look at them, but just to have 'em - and you can clearly see the love that's gone into this one. I can't totally describe it: I think all my platonic feelings for The Joker had been converted into this mildly sexualized presentation, thus stimulating and advancing my otherwise healthy fondness for clowns.
Or maybe I just wanted to get with a goth chick who was happy all the time... 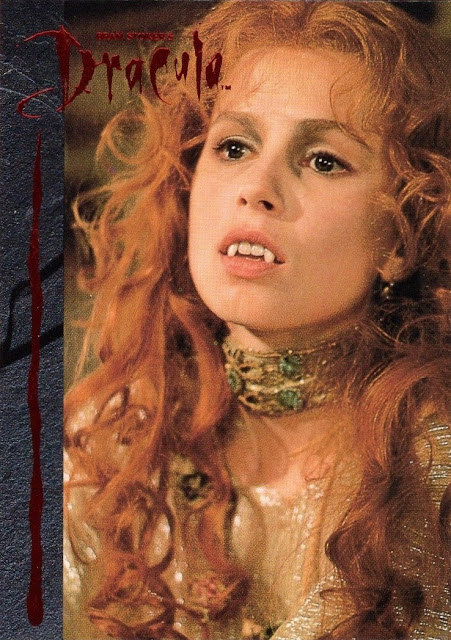 To a 9-year-old, Lucy was pretty exciting - and her lusty writhing and moaning made for a largely unnoticed transformation into vampirism. But as The Count's sex slave(?), she goes through various hair and wardrobe changes (as well as different stages of life and afterlife), which allotted me several Lucy cards to choose from. I bypassed the popular 'zombie' Lucy appearance in favor of this - but there was really no wrong answer here; these cards (like all the merch to come outta this movie) were so decadently eloquent that we almost didn't deserve them -- even if the movie did. 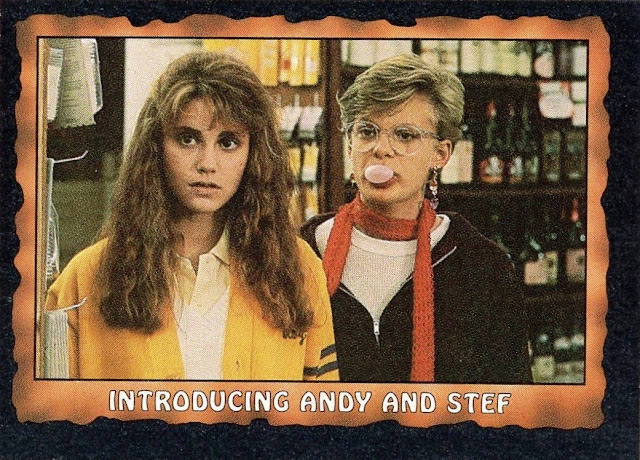 Hey, another twofer! I could be sore & complain that we got rooked outta two separate cards (even Mama Fratelli got her own portrait), but it's easy to be optimistic because they were kinda my two favorite 'Goonies.' so I'll take this as the bonus that it is. In fact, since we're living with the constant threat of unfair remakes and sad sequels, I would actually welcome an Andy and Stef spin-off flick - especially if the entire premise is just them hanging out & exchanging compelling dialogue. 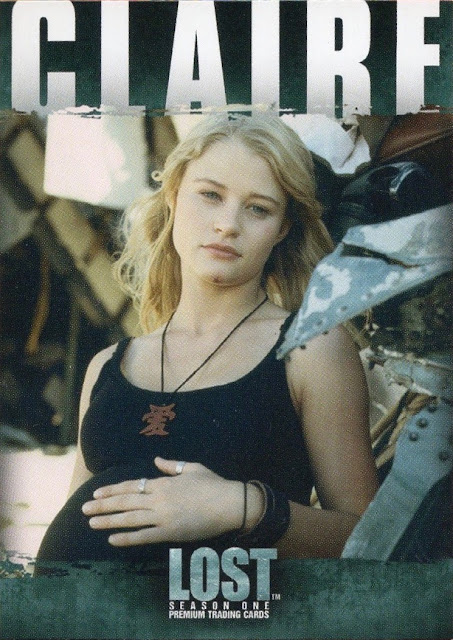 With all its colorful mysteries and delicious pacing and relentless character development, the first season of Lost coasted a bit on the idea of "who's hot?" - because we're human and that's how that works. And from the show's humble beginnings to its wacky finale, I was consistently a 'Claire' guy - up to and including (and particularly) her Hot Topic past and her dirty jungle-lady descent into madness.
These are stats worthy of a trading card.