What's more Summery than a big splashy movie sequel? How about trading cards depicting that very concept...?
Sometimes a "Part 2" can feel like a callback for a job or a second date; we feel blessed with the opportunity to have some more of whatever the first one had. And in the case of some (or all) of these first movies, they pulled in enough cash to blow on decadent marketing and frivolous merchandise for their follow-up -- like these here cards. 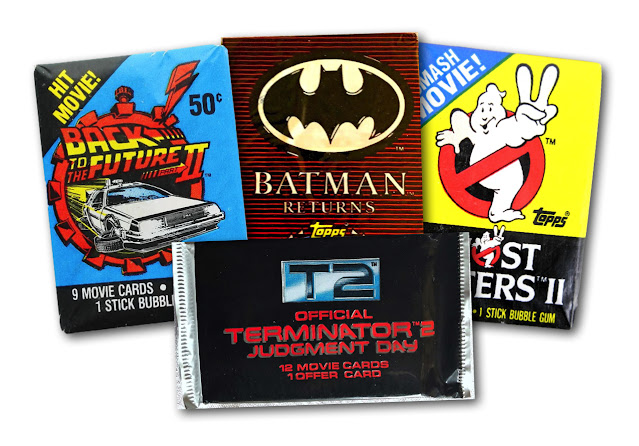 I've pulled a single from each of these series - some are obvious choices, some are not, it really doesn't matter cuz I'm gonna talk about all of 'em and you're gonna hear about it. At the very least, these movies shape a very tight 'culture sphere' (1989-1992); a period that makes me think of trading cards. And sequels.
- Paul
GHOSTBUSTERS II (#31) "Spengler Means Business" -- Topps, 1989 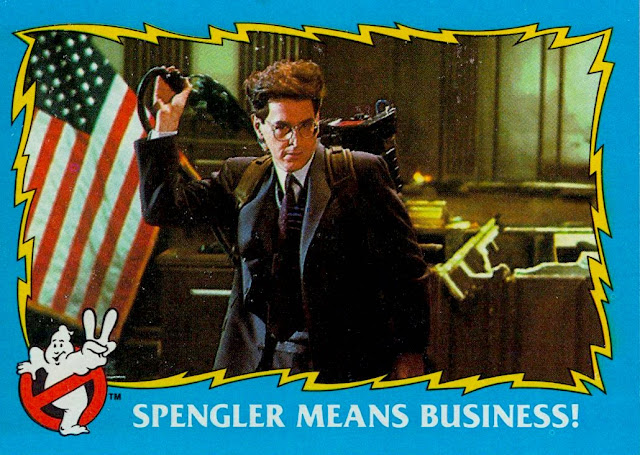 Egon was my favorite. I could try and think of reasons here in this moment, but when I was a kid, he just was. I have a complicated, "happy to be stuck with you" relationship with this movie, but one of its weird strengths is that it is - for better or worse - a live action cartoon: legitimizing the array of candy and toys and trading cards it generated. It had a different tone than the first, and collectible ephemera like this helped me embrace it.
BATMAN RETURNS (#43) -- Topps Stadium Club, 1992 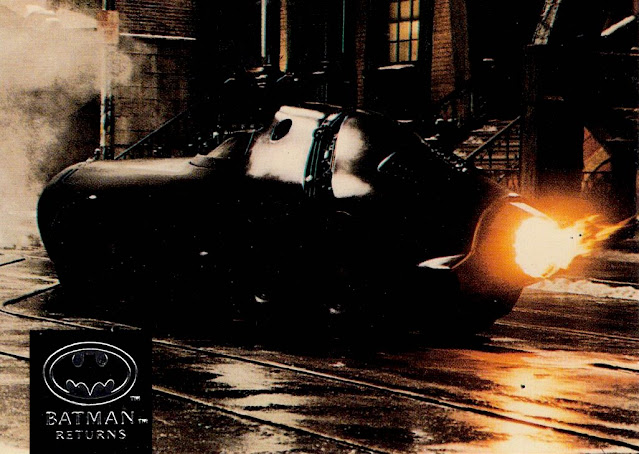 This movie had two entirely different sets of cards: the cheap standard ones on faded cardboard, and then there was this glossy, gorgeous, expensive set that fully captured the shiny blackness of the film. I didn't exactly pick a card that best illustrates their luster, but I don't care - so rarely do I get a chance to talk about the Bat Missile! It's a fun surprise within the context of the scene, but more than that, it's the coolest gadget any Batman has given us in any iteration of the franchise. Take that, Bat Sled.
T2 (#40) "The T-1000 Dispatches Lewis the Guard" -- Impel, 1991 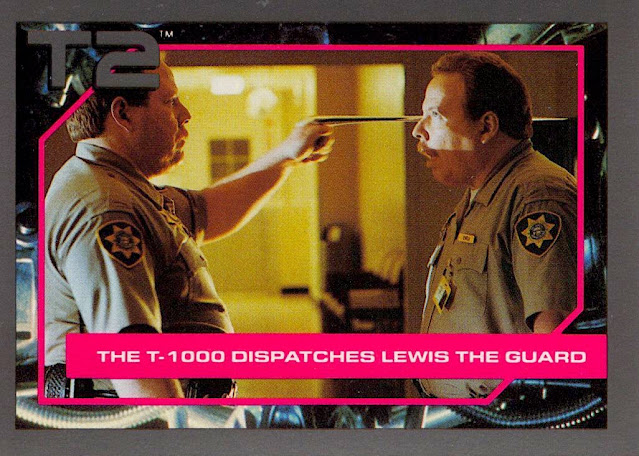 I'm sure the budget allowed for at least one more split screen gag, but why bother when we've got Don and Dean Stanton - the identical twin character actors of our collective youth (Good Morning, Vietnam, Gremlins 2, Mom & Dad Save the World). And just thinking of their scene in this helps me realize that this mainstream Action triumph was one of the most awesomely brutal Slasher pics ever marketed to an unsuspecting public. Were we ever so lucky?
BACK TO THE FUTURE PART II (#74) "More Good News!" -- Topps, 1989 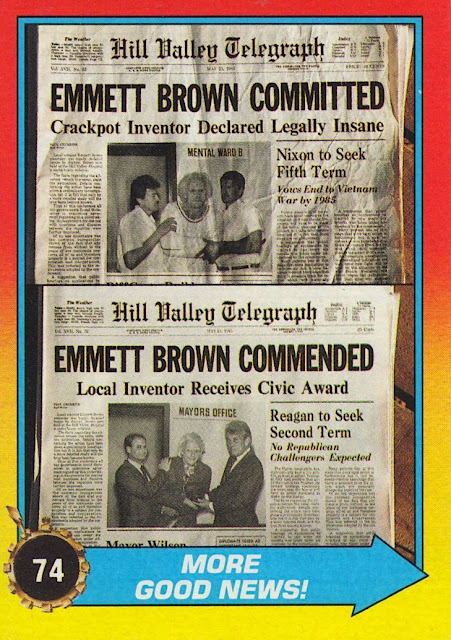 Not the most graphically compelling card in the series, but it allows a longer look at a brief visual gag we might've otherwise missed; explicitly put, "Nixon to Seek Fifth Term - Vows End to Vietnam War by 1985." Who knows how many tiny details they threw in this and stuff like this (this movie should be championed just for its easter eggs alone), but one thing's for sure: don't allow the high school bully to rise to power, because the world will burn.