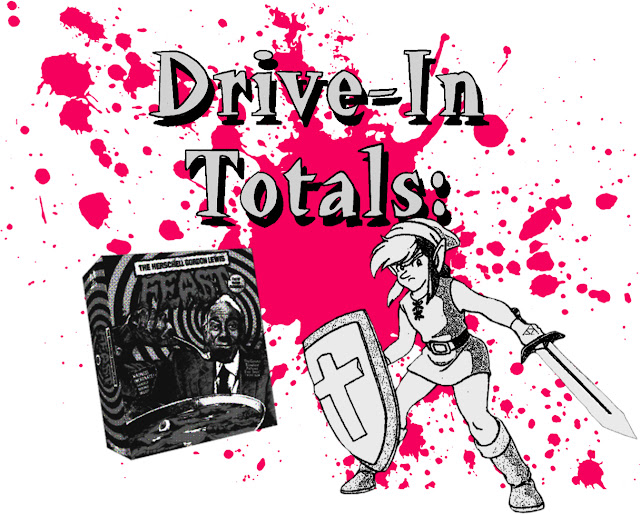 It's Summer! Have we mentioned that?
Not to let this become mechanical, but we really needed it this year, so we're savoring every step of the way. In fact, we're so excited that we're expanding the Starter Pack into separate (but unified) parts -- y'know, like "The White Album." We're submitting to you two entirely different lists of Summer projects: some we'll do for a weekend, some we'll smoke down to the filter, but all are assuredly groove approved (and this is the time for our meatiest grooves).
Help yourself, fucker!
The Paul List
The Herschell Gordon Lewis Feast 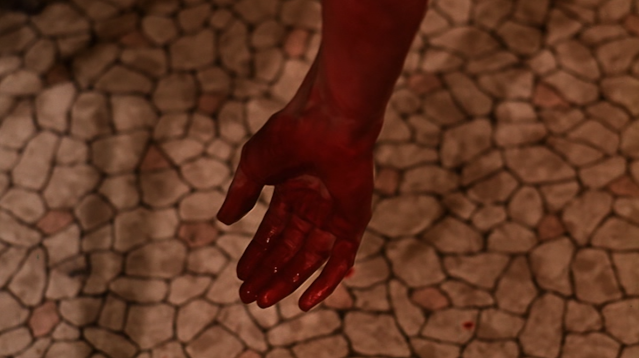 I received this gaudy monstrosity 3 Christmases ago, and I've barely scratched the surface. 14 movies from The Godfather of Gore (most of which I've never seen), various documentaries, some kinda crazy press kit full of cereal box/placemat activities -- all contained in a tome the size of a Taschen book. 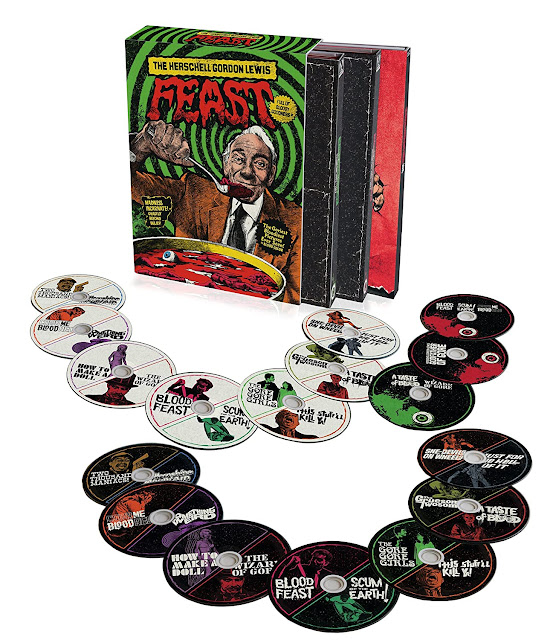 I get it; I know what I'm in for, I get the vibe - enough to know that this is Summer Horror in its purest form: loud & red & nude. I'll engage in plenty of warm weather traditions this year (and every year), but I feel blessed when something clearly has the potential to begin a new chapter, and I revel in my freedom to consciously initiate things like that.
There's also much to be said about 'box sets': don't they make you feel rich? I mean, like, wealthy? And it's great to have some director- or genre-specific filmography compiled in a shiny box, but it's such an overwhelming thrill when it's full of stuff that's new to you.
Legend of Zelda Marathon 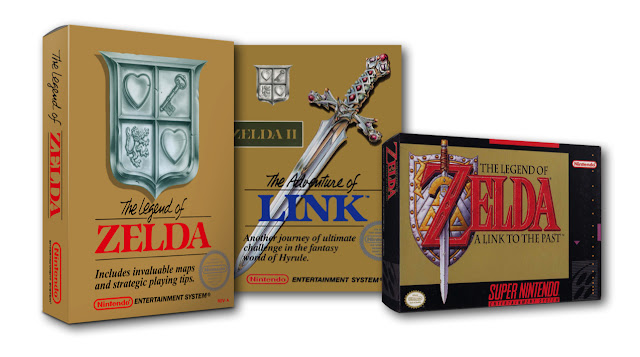 Yeah alright, I'm playing old video games all Summer long - big f'n deal, I know. But as true as that is, why exactly am I telling you? Because, to paraphrase Lt. Vincent Hanna of the LAPD, "When I think of Zelda... Legend of Zelda... somethin' comes outta me." 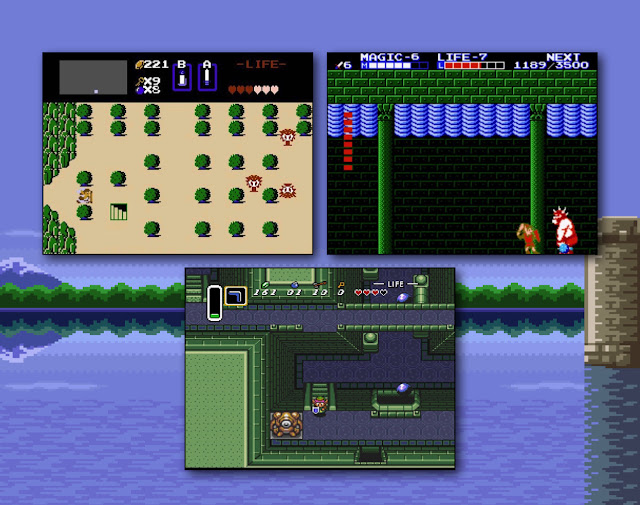 As you know, I don't do any games later than 1993, so this 'binge' will include only the first three Zelda games (the "Original Trilogy"), in order of their release. I realize that demonstrates a non-linear narrative, but I never really understood that part - and I used to read the shit outta those game manuals. And while the convoluted 'story' was always subtext for me, these games (and most of the other retro efforts as well) forge a fantastical frame of mind with their patterns and rhythms of shapes and sounds, and they very much transport me into these worlds of haunted forests and dangerous deserts. The gameplay is secondary to these 3 different (though somewhat similar) flavors of meditation, and bring enough Summertime energy to carry you through the season.
Let's Get Some Shit! 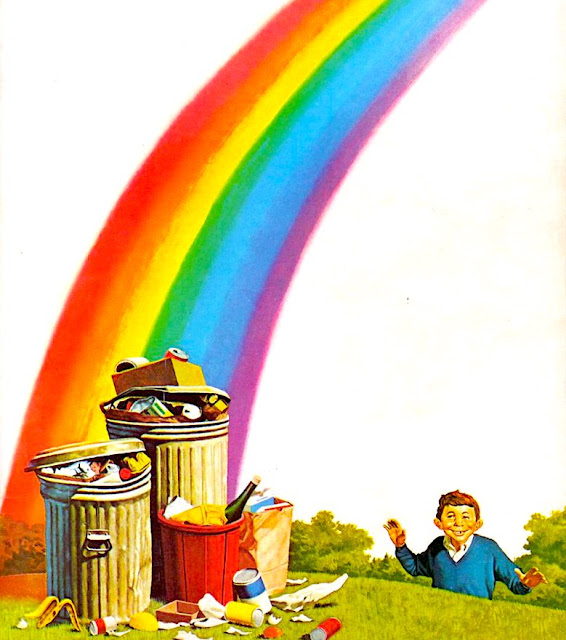 We were swindled out of a great many discoveries and acquisitions in the year of our lord 2020, but now as stuff is lifted and things are immunized, we have every intention of making up for lost time -- because we get the shit. Not from stores necessarily because there aren't any (though we may pick up a snack or two), but we'll continue to take advantage of things like forthcoming sales from Vinegar Syndrome, Criterion, and probably all the others. We'll be sure to keep eBay and Etsy in business. Shops like Gutter Garbs, Local Boogeyman, and Redbubble will resume clothing us. But when all is said and done, it's the flea markets that land somewhere in the Top 5 of All Things Summer, and they're an important lubricant in our ongoing orgy of oddities. We've never not been proactive in sharing booty pics via social media (particularly our Instagram), so between that & our videos of Shit, there'll be a consistent, high volume of product placement in your various feeds. And like everything we do, we ask that you return the favor.
The Babes List
The Last Drive-In with Joe Bob Briggs 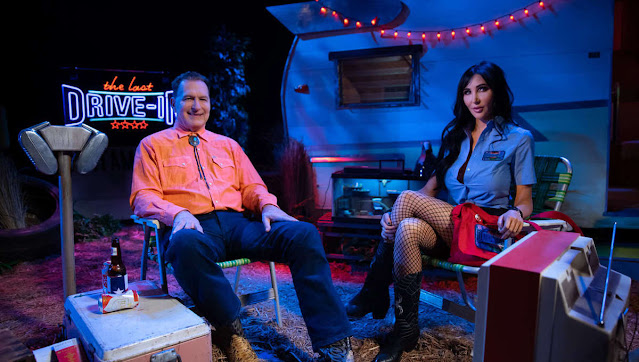 There really isn't much left that I get excited about in terms of media, and I don't mean drippy crotch wet. I mean full-on geekgasm nostalgia overload, sending vibrations through your whole body, and snapping your synapses into a swirling vortex of sweet, tender love. I crave that as much as addicts need their fix. And I get it so very little. With film and television in a fucking dump, you have to take your time holding your nose as you sift through the shit, to get to the real gold. And then, if you're lucky, a shiny red Texan jewel will appear. And for a while, everything is alright because you will have this man to explain the real important things to you - if you know what I mean (and I think you do). 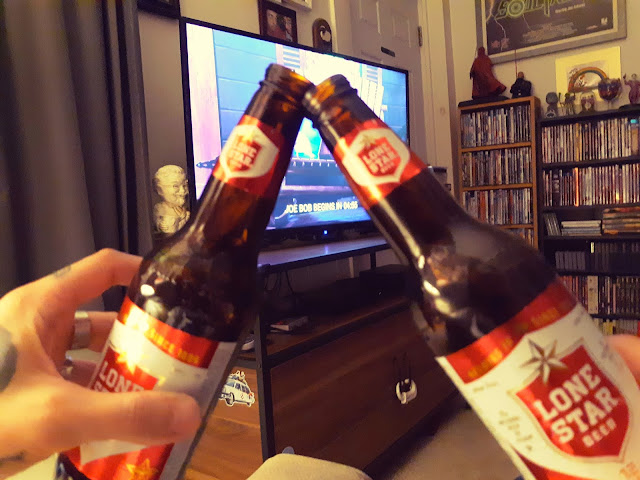 I am made of fudgesicles, all-you-can-eat Wendy's salad bar, Def Leppard, and horror movies. It's what she watched, so it's what I heard in utero. I watched them with her as a baby and as I grew up. I've seen lots of them. And Joe Bob was essential to this. His earliest program introduced me to a lot of different  body counts that I wouldn't have even thought to rent from the video store. And having no one else to share a love of cinema with, he immediately became my first geek crush. He loved my favorite thing.
Now he's back and doing this thing all over again. Because what we need - specifically the spooky sort of folk - is a leader. Catch him with us when he goes live on Shudder at 9pm est. Make sure you are fully prepared with your Lone Star beer and high fat foods. You're won't be sorry. Welcome to the Mutant Family.
Black Summer

A couple of years ago, I read a tweet by Stephen King that was hyping a new scary show on Netflix. Ordinarily I wouldn't care. It's not that I don't take the great nightmare maestro himself seriously. I just don't like homework. The moment someone tells me to watch something, I've checked out. And it's usually a total loss of interest. But it was how he phrased his recommendation that really grabbed my attention.
"Just when you think there's no more scare left in zombies, THIS comes along. Existential hell in the suburbs, stripped to the bone." 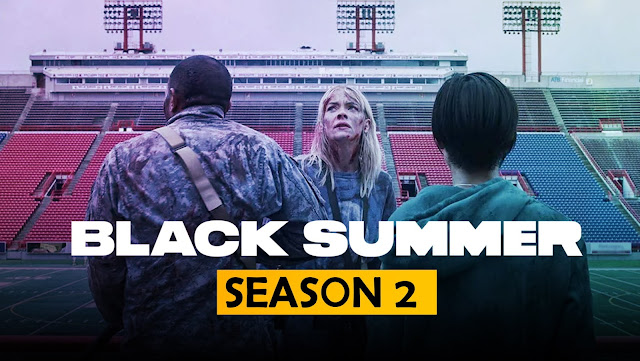 So I took the bait. I decided to watch an episode on my own. I didn't think Paul would have any interest. He disliked the tropes even more than I did. I remember texting him during the show. I told him I was watching an episode of a series that was fucking killing it, and that we needed to watch it together. We pursued this nail-biter - watching the whole thing in one or two days. Now go sit and stare for a while and feel its anxiety. Bennett Media gives it 4 stars. Ignore the goofy blue filter though. I hate that too. Everything else works. And season 2 starts June 17th, so make sure you finish before then.
Eerie, Indiana - The Complete Series 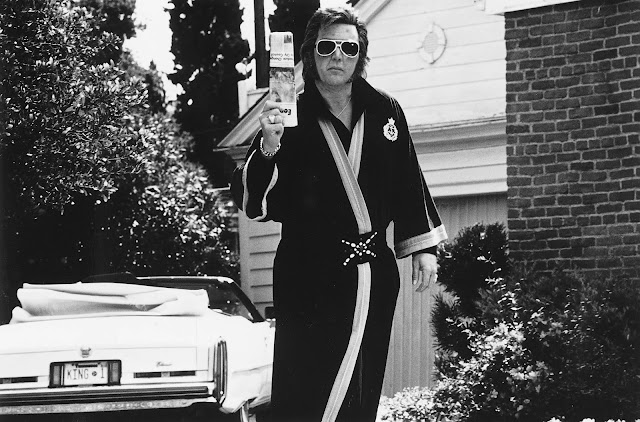 Some things in this world were just made for us. This show was one of those things. And it was for me. And only me. It fell out of the sky at the height of my Joe Dante obsession. A kids show. Spooky and mysterious in nature. Produced by Dante, some episodes Directed by Dante, and all episodes containing repeat actors in Dante's films. This little gem aired between September 1991 and April 1992.  Long enough to suck me in deep.
And then it was cancelled like anything cool when you were a kid. I very seldom caught a rerun on television after that. People I grew up with didn't remember it. So it basically disappeared from my life. But my best friend Paul bought me an out-of-print tangible copy from eBay, likely for a million dollars, just so I can take a nostalgia trip. And with that, every Friday night I'm gonna sit cross-legged in front of my TV, and watch my little show, with some Oreo Cookies and milk.

"I just don't like homework. The moment someone tells me to watch something, I've checked out. And it's usually a total loss of interest."

This happens to me as well. And when I tell other people to try something out, they also do this to me. Why is that? I guess it's more fun to discover something on your own rather than someone tell/instruct you to do it. It is honestly like homework when someone tells you to watch something. Finding good movies/good books/good music is like finding the treasure on the map - you do it yourself. Not someone else do it for you.

Season 2 of Black Summer is even fucking better; y'all watch it yet? Episode 5 is my standout fave.

currently at ep. 4, and even that was monumental in its choreography

Oh absolutely. Lemme know when y'all finish 5. It's so fucking good.