It Was 30 Years Ago RIGHT NOW

Too soon to talk about a 30th anniversary? I'm gonna go ahead and vote "yes" -- 1991 dispenses plenty of talking points, so we'll get more official when the gettin's good. But this, this ain't no run of the mill "hooray for then" sorta retrospective - this is a dead-on balls accurate commemoration of exactly 30 years ago, via our favorite book: TV Guide. Not that there were any major historical milestones this week (TV-related or other), but every shade of culture is a holiday as long as the weather and the calendar continue to play a significant role in our existence. 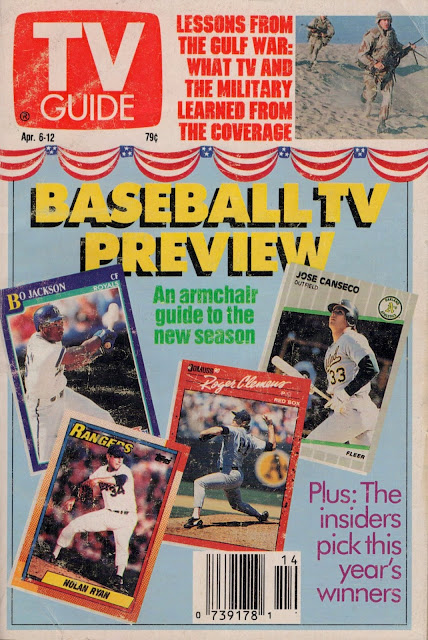 Vol. 39 No. 14 Issue #1984 The week of April 6 - 12, 1991. The week before April vacation - I was in the 2nd grade. Baseball cards were on my list of reasons for living, and suddenly here they were, acting as a visual aid to promote the start of the season... It's a decidedly odd graphic design choice (both literally and visually), but I had these very cards and I'm sure I felt entirely gratified and validated to see them on the cover of a national publication. But to reiterate: this isn't a particularly special issue - it just happens to turn 30 this week, and this magazine has magic powers that allows one to time travel more than a single song, movie, or televison program could offer.
Let's dig in: 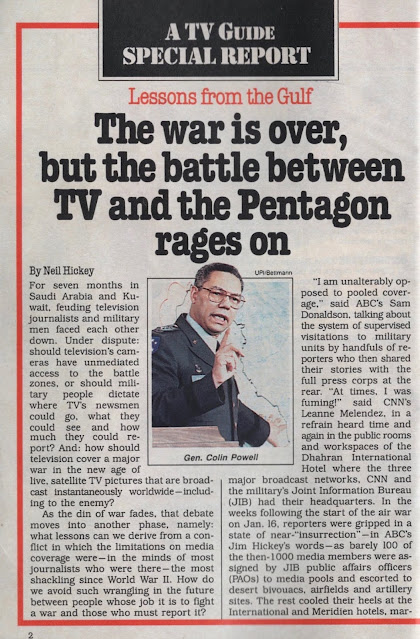 Ah yes, the Iraqi conflict had been resolved. Glad they got that all squared away. Y'know, it's incredible, this war and all its abstractions has been around nearly as long as most of us have been alive... An effortless observation, but there it is: a tangible reminder of just how stagnant we've been. And the reason it's mentioned again & again in this magazine is because the war was the highest-rated show of the season, and even still was continually compromising the numbers for regular programming; an ominous foreshadow to the deteriorating integrity of televised journalism. 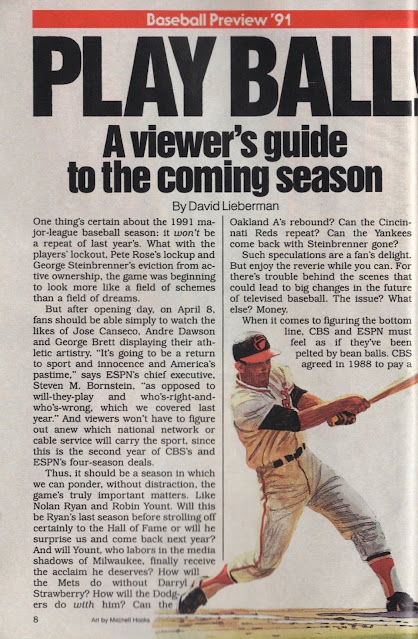 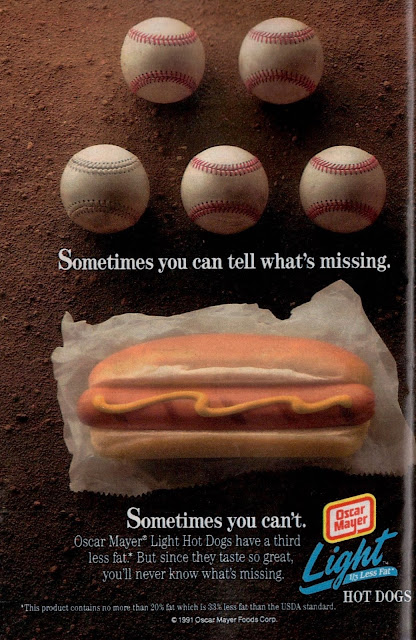 But who cares, because Sports! I may've been only 8 years old, but looking back on it now, baseball was really popular - like, way more than it is now (and not just for your hometeam). In the first half of the 90s, think of how many shows did a 'baseball episode' - I just thought I was hyperaware of it because I was into it, but in hindsight, it was the style at the time time. Also, baseball indicated Spring, and Spring indicated Summer... Life was good. 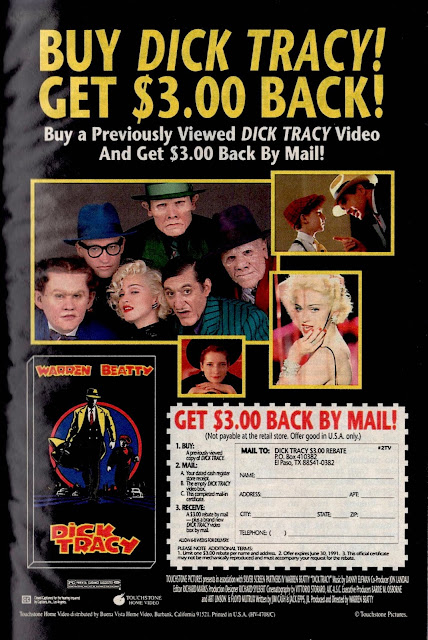 It's such a sugar high to flip through old stuff and find Flattop and Itchy peering out at me. And I should have left it at that, but I had to go ahead and actually read the details of this convoluted "rebate":
- First, you have to buy a used copy of Dick Tracy (I assume from your video rental store).
- Second, you hafta mail in the receipt from your purchase and the cover to the movie(!) And in 6 to 8 weeks, they'll send you $3.00 and a new video cover.
Initially, I thought that was a lotta labor for 3 bucks, but the promise of a new shiny box for my Dick Tracy tape mighta sold me. 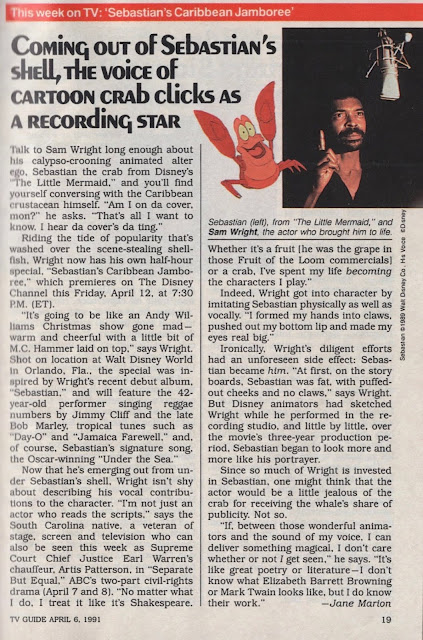 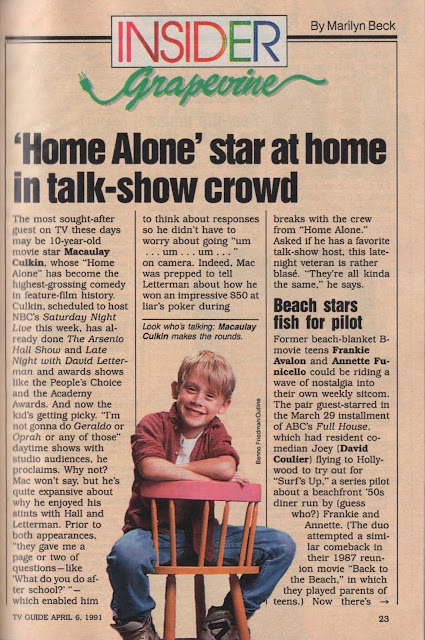 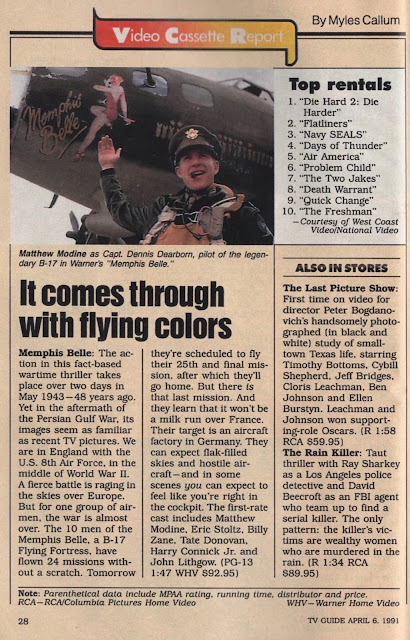 Speaking of home video, tape rentals were at an all-time high - more than the 80s even. Die Hard 2 broke a buncha VHS records, and within a few weeks, people literally lined up outside video stores for the release of Ghost like it was Boyz II Men tickets. And it makes sense - I couldn't count how many movies I saw for the first time the year after they were in theaters. 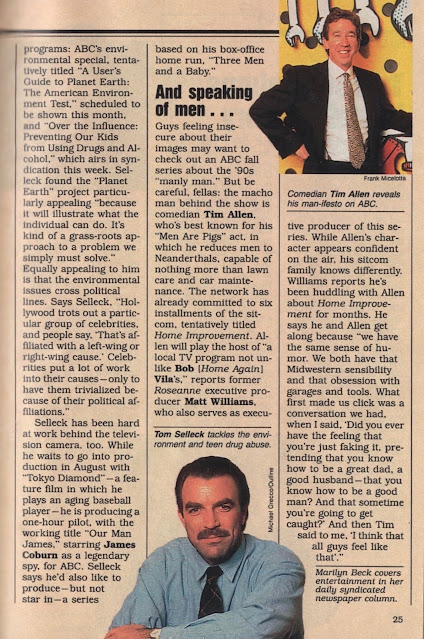 Also in these pages is an article about standup comedian Tim Allen's new sitcom, tentatively titled Home Improvement. I didn't watch it, but I heard it did well. 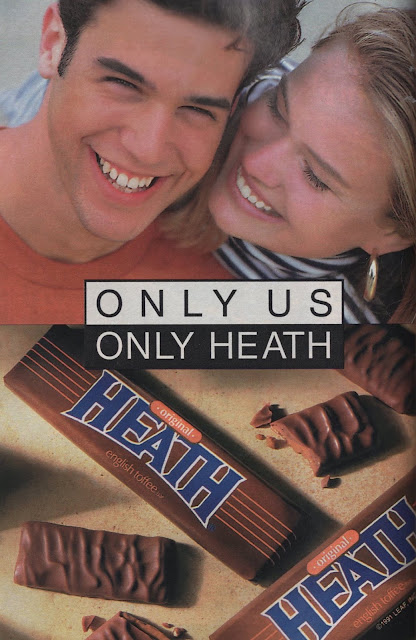 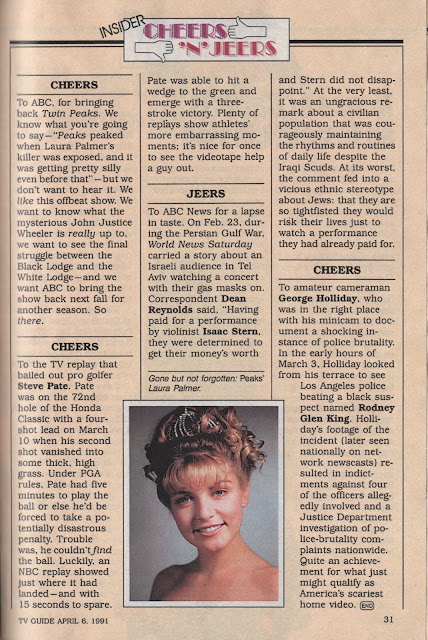 "Cheers n' Jeers" always seems to have some prognostic ingredients - sometimes it's obvious, sometimes you have to decode and interpret their special brand of ESP... This was one was obvious: a "Cheers" to ABC for bringing back Twin Peaks. They go on to say that they like where Season 2 is going despite the quick resolution of the main mystery, and they hope they bring it back for a Third...
Also "Cheers" to George Holiday, who happened to videotape members of the LAPD "beating a black suspect named Rodney Glen King." They point out that the footage led to the indictments of the officers involved - indicating some semblance of assurance that justice would eventually prevail. 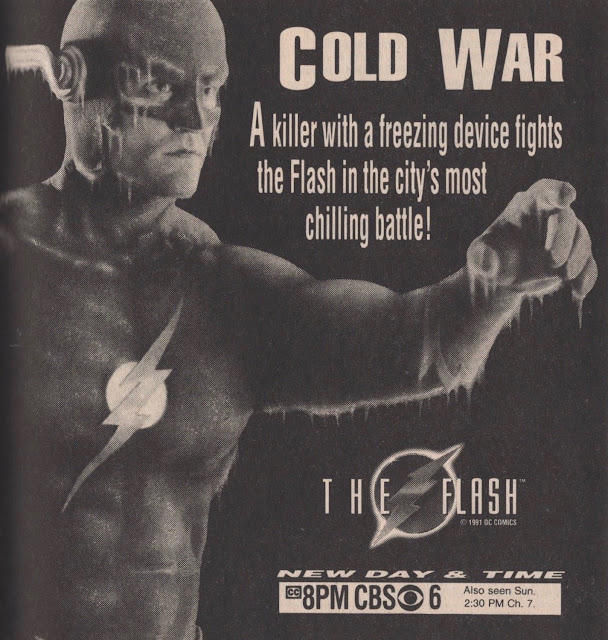 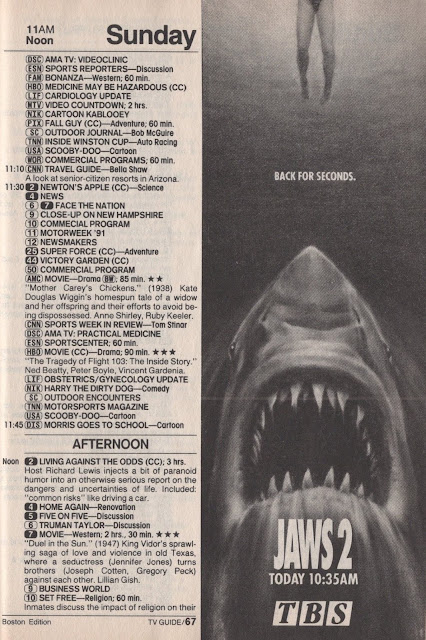 Some movies work best on a Drive-In screen. Some movies were made for IMAX. I even believe that there are a small handful that look best on VHS. But I'm pretty certain that we can all agree that Jaws 2 was meant to be watched only on Sundays at 10:35am on TBS. 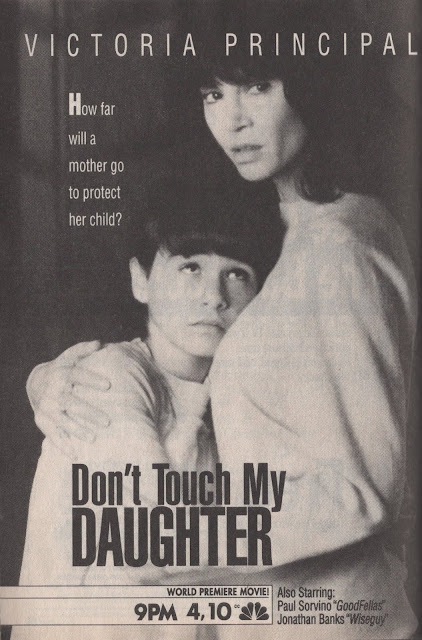 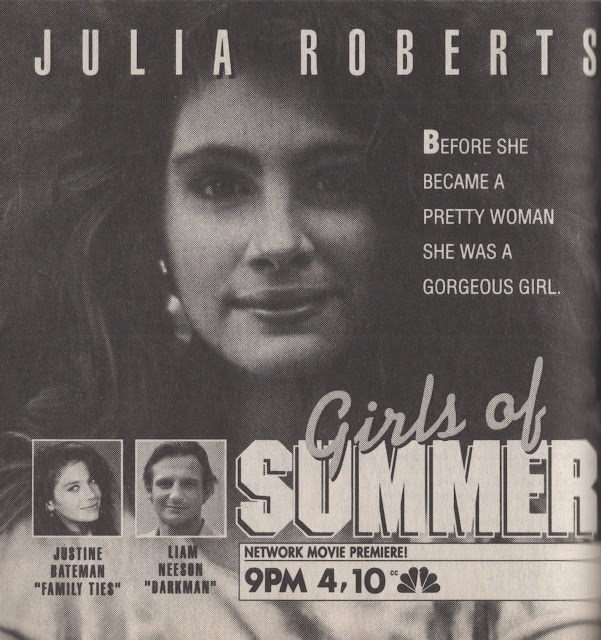 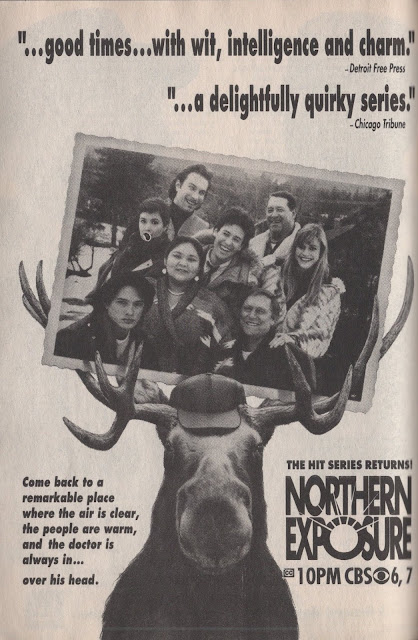 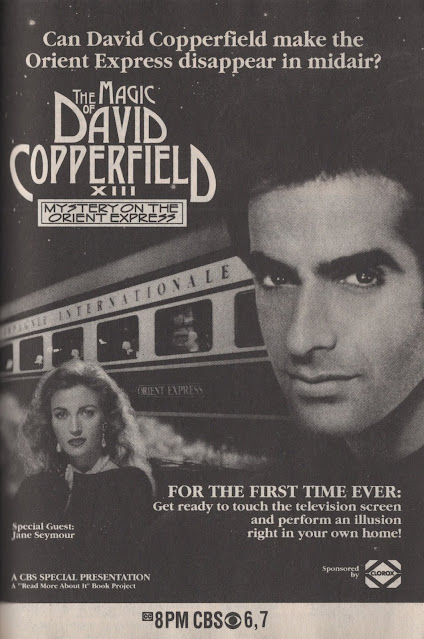 Anytime David Copperfield had a special, I would watch, but the only one I really remember was this one - partly because everyone in school talked about it the next day. (I think even the teacher had something to say about it.) But the main reason it's so memorable is because he did an 'interactive' card trick whereby we at home would pick a card by touching the TV screen and he would guess which one we chose. And by God he did! 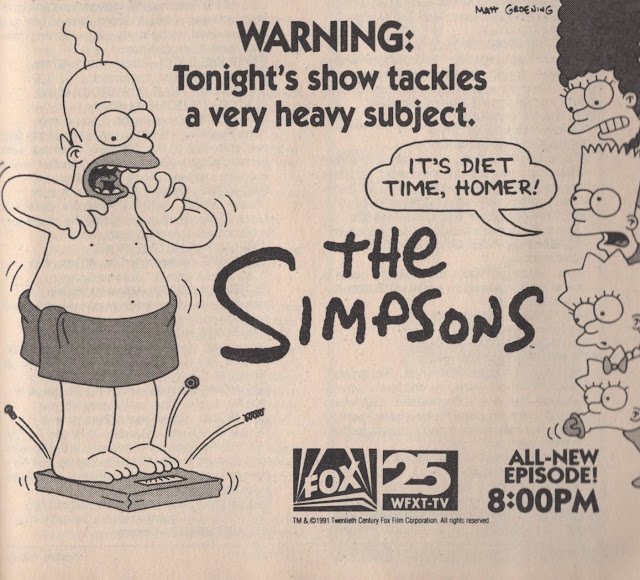 We've discussed world events, sports, and Primetime experiences - but in my week of TV viewing, these played a very small part. The last time we went through a TV guide I listed off the best programs of Saturday morning - but my busy weekend schedule of sleeping in, Zelda II, and wandering the neighborhood would sometimes compromise even that sparkling lineup. What was a guarantee was my weekday watchlist: before school, after school, and if I skipped (which was often), during school hours were all time slots that I made the most of.
30 years ago today was Wednesday, April 10, 1991. So, for the sake of this whimsical journey, let's say I faked an illness that day and was confined to the couch. Here were my options: 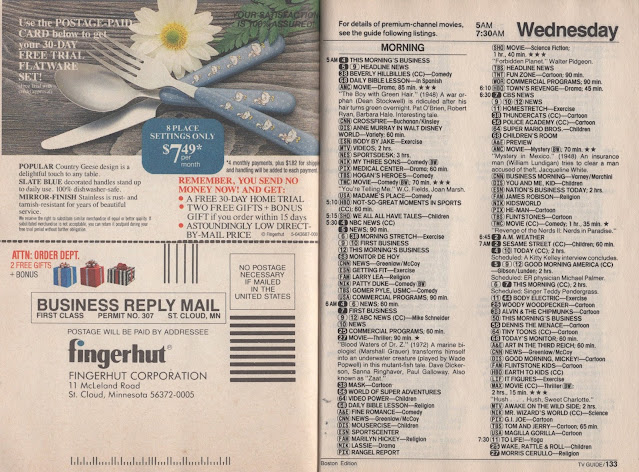 I'm certain this is only interesting to me, but in broader terms, I'm also sure you can empathize with the excitement and the authoritative affirmation of the ability to read what I did on this date in history. Equal to that, it's an excuse to talk about some TV.
7:00am - Dennis the Menace
7:30am - Muppet Babies 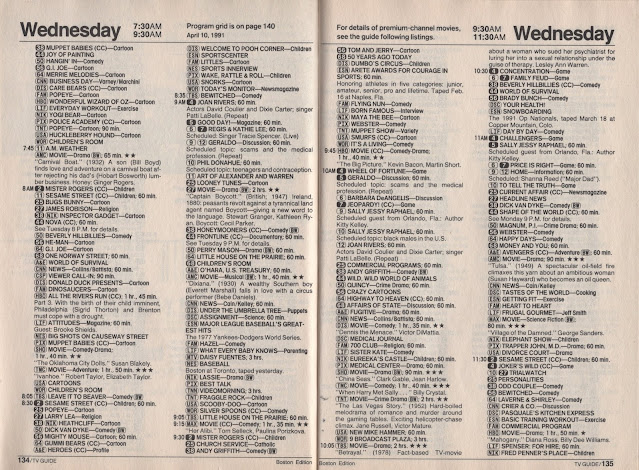 8:00am - Inspector Gadget followed Muppet Babies on channel 38, and was also on Nickelodeon at the same time - I'm guessing I didn't bother switching over. The listing for USA is simply "Cartoons." I'd be very curious to know what exactly the hell that was.
8:30am - Heathcliff
9:00am - Looney Tunes was on 'round the clock, and its only competition at this time was the second half of the Mighty Mouse hour. Coulda gone either way.
9:30am - It was most likely Tom & Jerry, but every once in a while, the stark, existential trippiness of Maya the Bee beckoned me...
10:00am - Looking at this lineup, the only thing that would've possibly interested me was "Crazy Cartoons" (which is just another broad description). Who knows, maybe I was able to talk my mom into some video game time by this point in the day...
10:30am - Family Feud
11:00am - Webster
11:30am - Bewitched 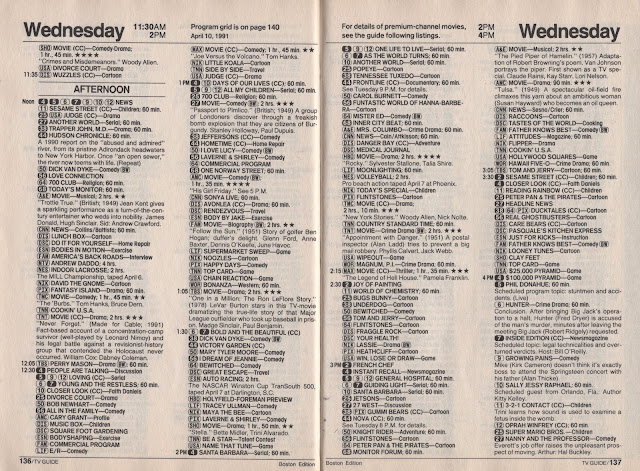 12:00pm - David the Gnome
12:30pm - Little Koala
1:00pm - Alright, so given the year and my age, it's most likely that I didn't have the house (or the TV) to myself. No matter: plenty of Summers spent with All My Children eventually had me hooked - enough to the point that my mother would tape it once I went back to school. That's no joke.
2:00pm - Popeye
2:30pm - Bugs Bunny
3:00pm - Flintstones
3:30pm - DuckTales (but probably switched over to Real Ghostbusters during commercial breaks).
4:00pm - Super Mario Bros. 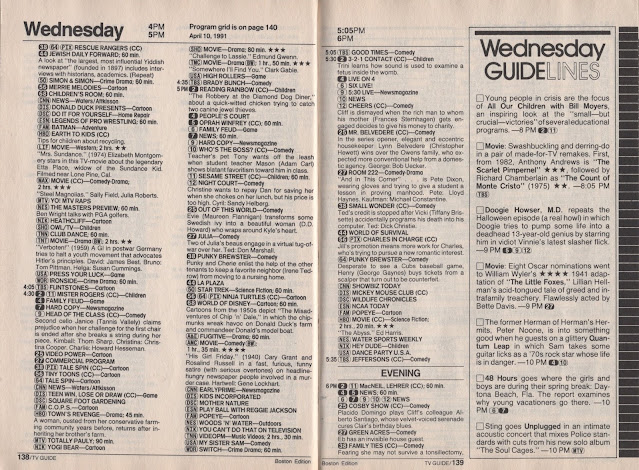 4:30pm - Tiny Toons
5:00pm - Ninja Turtles (but probably switched over to Punky during commercial breaks).
5:30pm - Charles in Charge
6:00pm - The next two hours were dedicated to the News, homework, suppertime, baths, shit like that. Important and beautiful things I'm sure (except for the homework), but that illustrates my point: there's no magazine that I can reference to let me know the precise synopsis of each evening. 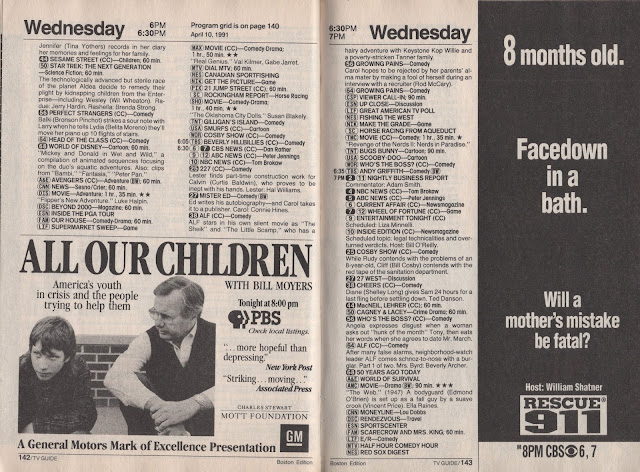 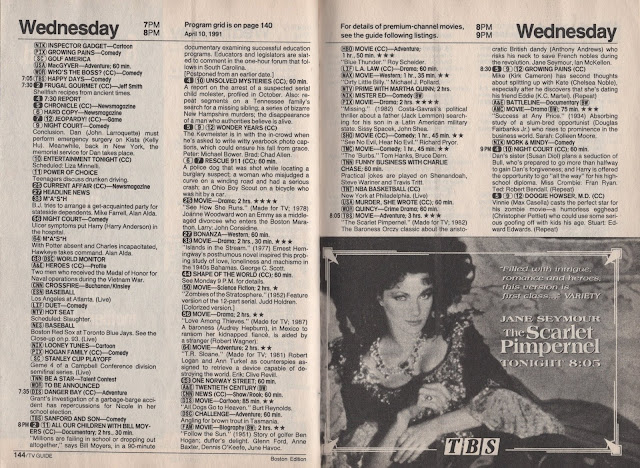 8:00pm - This one's a puzzler: I remember that Wonder Years premise, but I can't imagine skipping Rescue 911. Unsolved Mysteries gets a pass because it wasn't a 'ghost' or 'aliens' episode, but even still, it's hard for me now to imagine a time when there was actually too much good stuff to choose from, and if you missed it, that was it. (Although looking at this now, I kinda wish I watched Scarlet Pimpernel.) 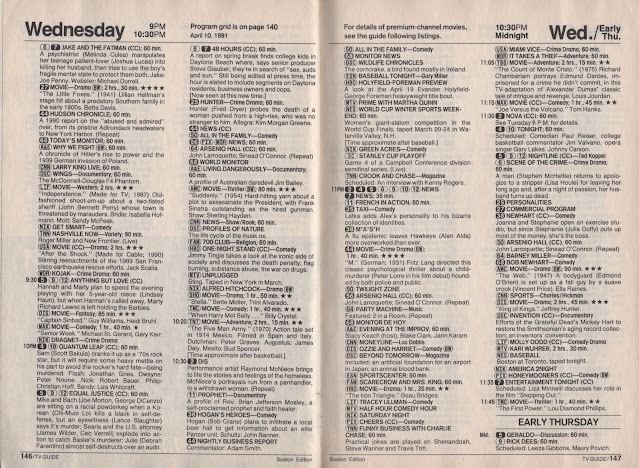 9:00pm - Get Smart
9:30pm - Beats me. I rarely watched Dragnet on purpose, but bedtime wasn't until 10. I'd have to assume this gap didn't last long, or Wednesdays just ran outta gas around this time.
10:00pm - I don't know how many years WNDS ran a solid hour of All in the Family, but it was enough for me to watch the entire series several times over.
11:00pm - Kinda pushing it for a school night, but one couldn't watch All in the Family and not watch M*A*S*H; the end credit theme to both shows still have that spooky melancholy vibe of another day gone by.
This is the part where I talk about how it's not as good as it used to be and TV sucks now along with everything else... But I won't because none of that's really true; what is true is that TV has always sucked. (Have you ever really watched Gilligan's Island?) But these shows - the shows I've mentioned - were wonderful, and my home and my life is set up in such a way now that I can watch any and all of them at any time I want. That's not a bad thing, that's a great thing; we've sacrificed the spontaneity and urgency of network programming, but life's full of enough surprises and fleeting moments to make up for the lost bittersweetness of sacrificing Unsolved Mysteries for Rescue 911. Those were the days.
- Paul 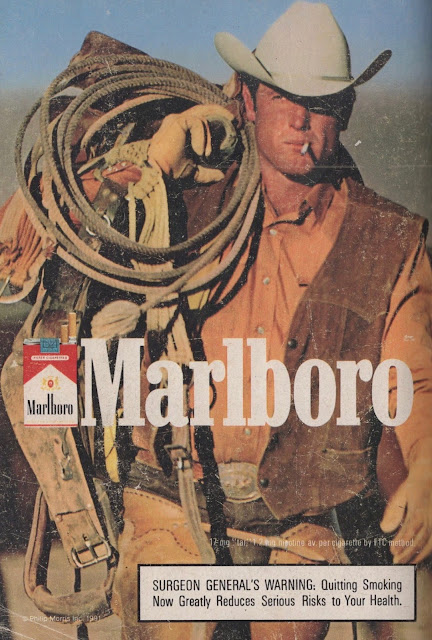