It's been a minute since I revisited this series -- I think it'd gotten to a point where I didn't see any merit or marrow in mining every single Batman, Dracula, and Beatles one-sheet that's hung above my head in my heyday of bedroom decor. (Unless you've been champing at the bit for that kinda content, but y'all've been pretty quiet lately.) And there's certainly a slew of additional bric & brac & odds & ends that I could discuss, but for this segment, we're gonna (mostly) take a look at posters I didn't have...
I wanna show you something called the "Universal Products Poster Gallery" - which clearly was just a quarterly catalogue mailer, and one that I've hung onto for over 25 years. 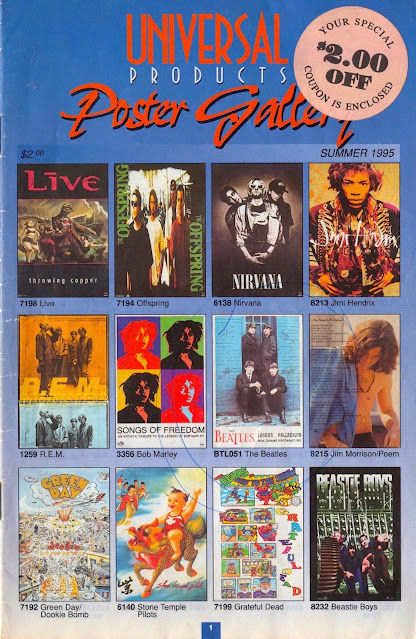 I sent away for one thing once, and for the next 5 years or so, I got little magazines like this at a rate of roughly one a month... and they meant the world to me. Page after glossy page of t-shirts, hats, furniture, videos, stickers, lava lamps, and various other things that lit up or made sounds or both. These catalogues were hardcore pornography, and I'd study their contents with big eyes and drooly lips. But this particular one that I saved is exclusively posters, and if you haven't already noticed, it's exclusively 1995 (save for The Beatles poster that I circled with a pen, as though that was supposed to magically bring it into my possession). 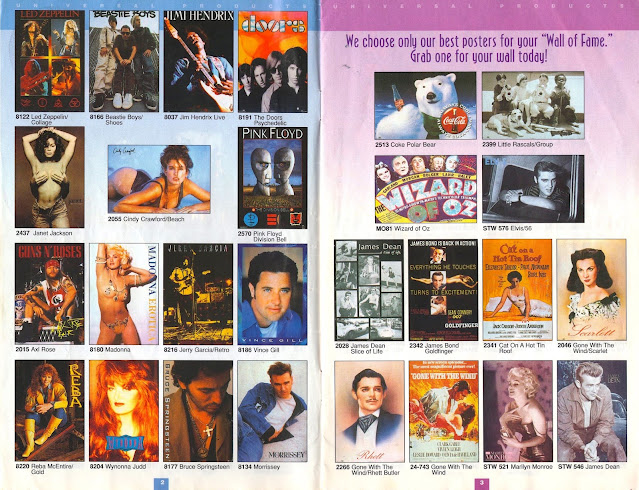 Funny thing is, while all this material is decidedly dated, the most mid 90s thing here is James Dean and Marilyn Monroe. I don't think I was actually aware enough to determine why they suddenly became wall art superstars 40 years after their prime - but boy were they ever. I'm sure Janet and Madonna were the most tantalizing to this 12-year-old, but if I got to choose one from this set to hang up today, I'm going with Reba. 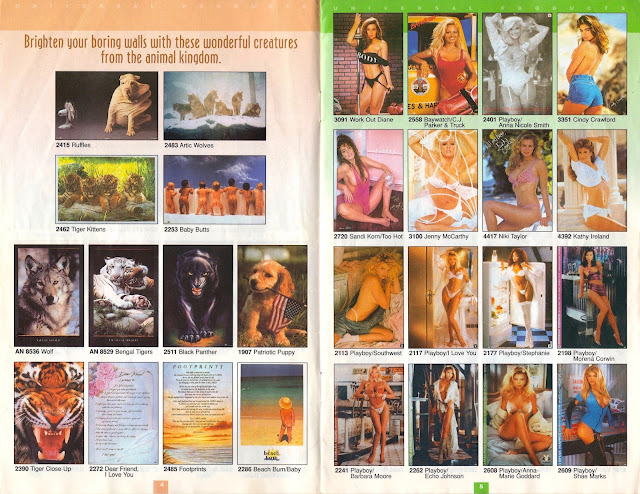 Cute animals, funny babies, inspirational poems, and slender women in various states of undress; I suppose on some superficial level, some of these are timeless. The Kathy Ireland one was actually my very first pinup (because it was all Kmart had) and I've already told you all about Sandi and how she's Too Hot... I'm just so pleased to welcome her back to the site - let's give her a round of applause. 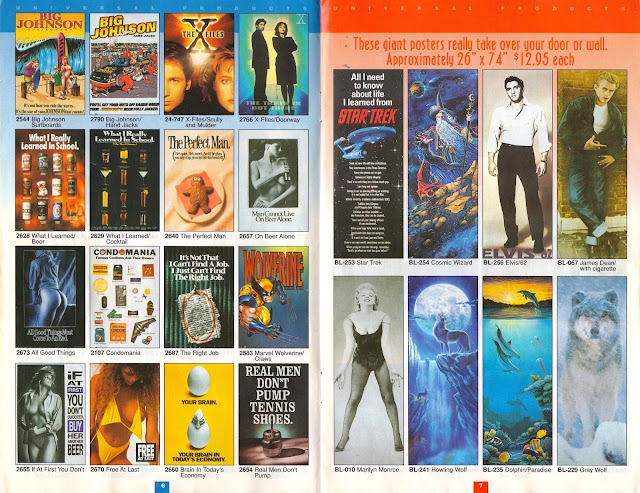 I suppose page 6 is largely "college humor": a flavor I wasn't really hip to outside of Animal House - I just interpreted them as bad jokes that would get progressively worse the more you had to look at them (and I goddamn looked at my posters all the time). Regarding page 7: 'door posters' can be a beautiful thing - especially when you don't tack 'em to a door -- and it also depends on the art. I actually had that wizard in a full-size 24x36, but wolves and sea life and 1950s Americana were not worthy of this format. 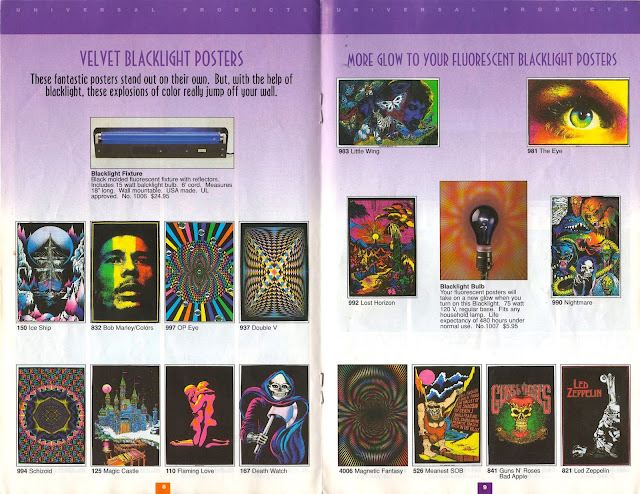 I had a blacklight poster, and I'll be damned if I can remember what it looked like. What I do remember is that as cool as the effect the light gave off, the bulb gave off about as much heat as a thousand suns, and would predictably melt and destroy any lamp it lived in. That's a nostalgic smell. 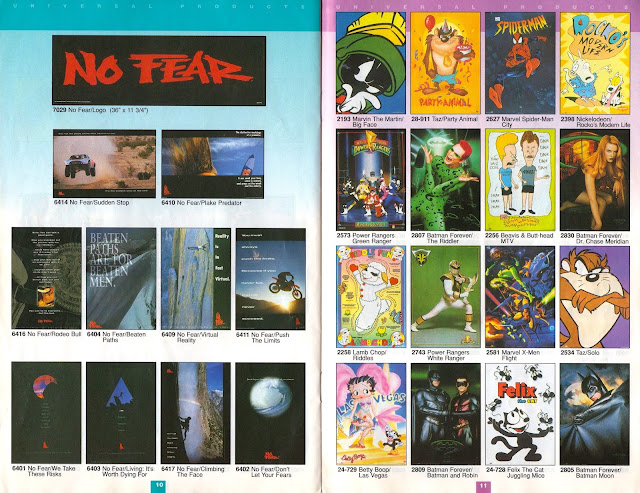 Page 10 was and is white noise to me - I barely had enough courage for school, and I rarely ever 'did the Dew.' (Also, in aesthetic terms, they're really awful.) Having said that, page 11 didn't have anything much of interest either: I truly hated Power Rangers, and I certainly wasn't that crazy about Batman Forever either. I'd had enough Marvin the Martian apparel, linens, magnets, and trading cards at that point that I was sick of the image. Rocko was the poor man's Ren & Stimpy. Marvel interested me as much then as it does now. Two things are clear: I was the wrong age for this page, and it suffers from a complete lack of Sandi Korn. 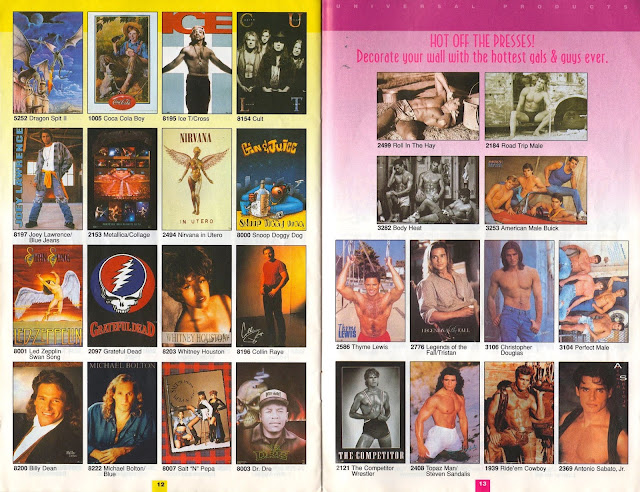 These options were also pretty uninspiring. (I guess looking at it now, that Salt n' Pepa one feels pretty good.) And I suppose like any awkward, chubby, 12-year-old boy, it was a tough pill to swallow to get a sense of what an attractive white guy is supposed to look like in 1995 (not that Brad has exactly hit the wall in his old age). 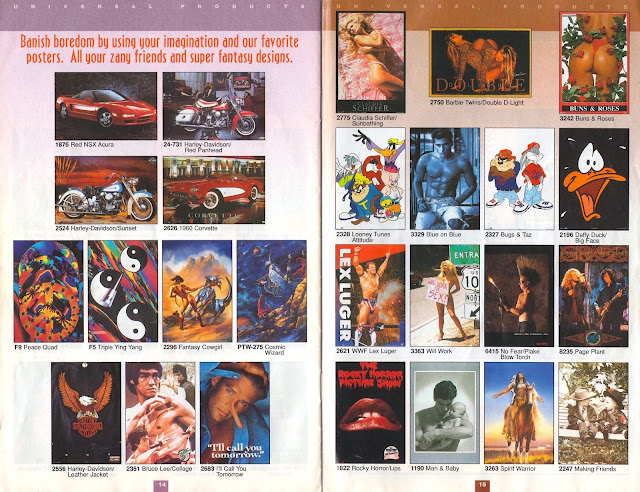 As I've mentioned, I had that '60 Vette poster - and while I actually did love the car, I felt cool having an automobile pinup in my room. And as far as the other stuff on these pages... I really don't know where to begin. I mean, I guess there's something for everybody here (again, I did have that 'Cosmic Wizard'), but even if that's clearly the case, this is some ugly-ass 90s shit that they obviously dumped into the end of the book. 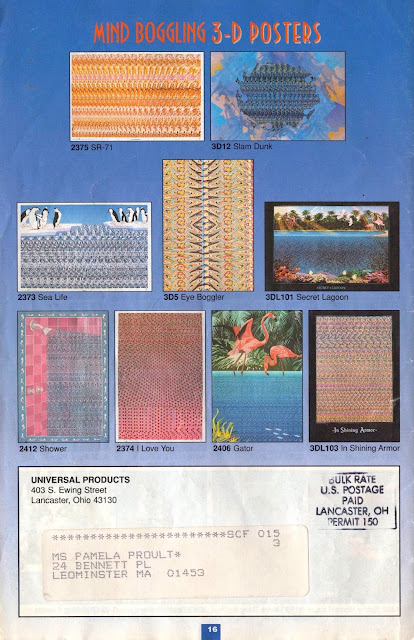 But I've spoken too soon. There have been tons of fads and gimmicks that have aged gracefully through kitsch or some natural evolution. Thing of it is, 'Magic Eye Art' sucked then as much as it sucks now.
- Paul