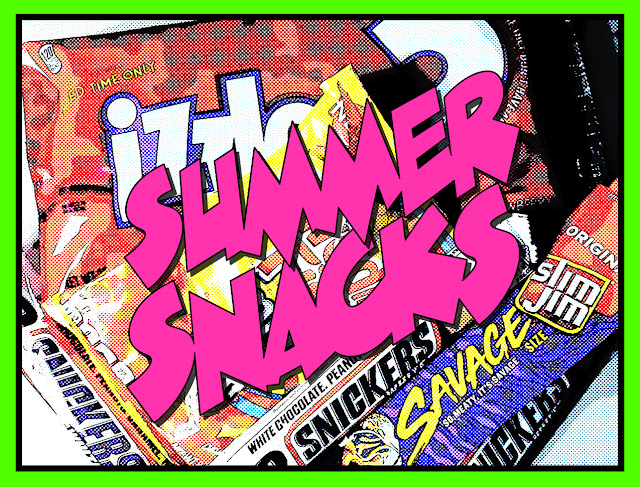 How can we tell when the seasons have changed? Not from the Gregorian calendar, and certainly not from the weather... Why it's junk food, of course!

As I'm sure you're well aware, all the popular stuff is monopolized by the four major holidays, but Summer always gets its share of celebratory snacks - even if the gimmick is a little more subtle. Generally you'll find words like "Surfin'" or "Sizzlin'" or similar sunny adverbs on the labels to indicate their timelines, and other times you'd have to be rollerblading on a rainbow alongside Spuds MacKenzie to get the full effect of Summertime. So here's a menu of "limited edition" meat, candy, and crackers that don't explicitly have anything to do with Summer, but I'm gonna think about Summer while I eat them, because that's how I roll. 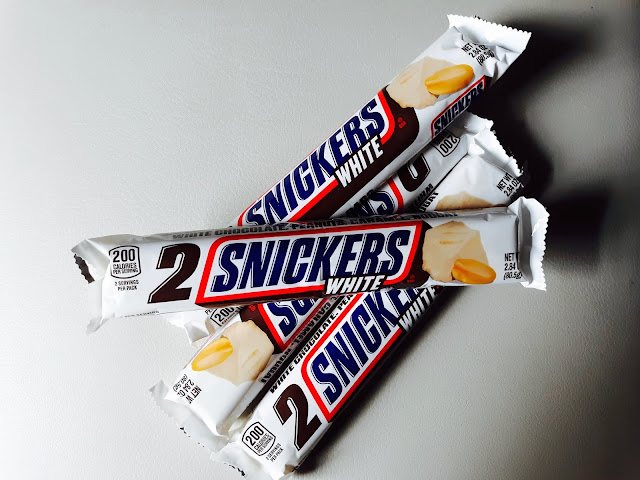 I'd never been a fan of white chocolate. (Yes, this is the kinda mind-blowing information I'm gonna be throwing at you during this post, so buckle up!) Then, during some Easter season 6 or 7 years ago, Hershey's introduced White Reese's Eggs, and my life hasn't been the same since. Every year now, you'll find White Kit Kats, White Twix, White Chocolate M&Ms; it's just been an ongoing reign of white supremacy! (Alright, you come up with better descriptive verbiage.) And now, to mark the beginning of the 2020 Summer season, Mars has introduced Snickers White! 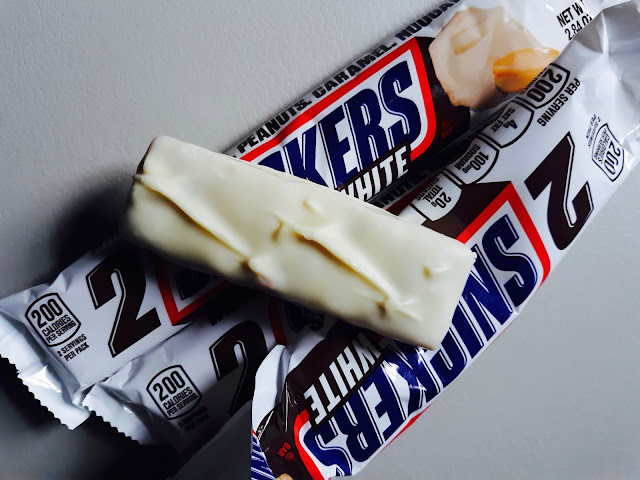 I gotta admit, I've been kinda waiting for this one. And I gotta admit, it's just too darn sweet. The strength of Snickers has always been its balance of sweet & salty, and now the balance is all fucked up. Having said that, the store had four of them, so I bought four of them, and they're all "Sharing Size" (bullshit, it's fucking "King Size!" You can't change my mind!), so who knows - they could end up growing on me by the time my supply runs out. 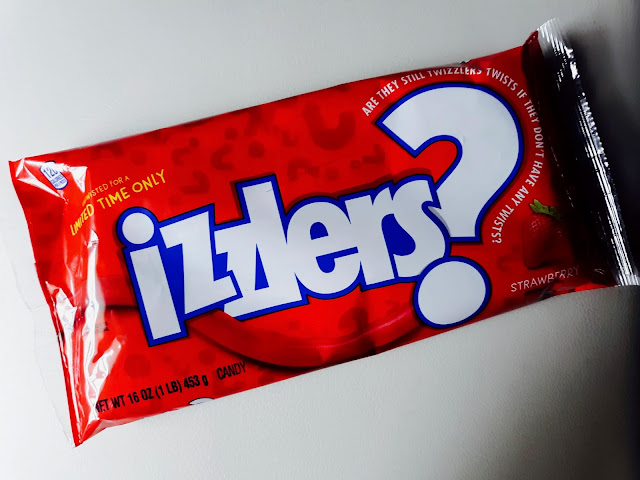 "Are they still Twizzlers if they don't have any twists?" The short answer is: yes, very much so. They've never really been in my Top 10 of anything, but I imagined these 'untwisted' Twizzlers as thick, solid licorice ropes. At best, they're flat, hollow tubes with the same jagged tips as their widely-popular predecessor. I think the most fun you could have with these is to use them as strawberry-scented straws with which to drink a satisfying beverage. Poor grades aside, I say big ups to Hershey's for going as far as actually changing the name of one of their more popular candies to promote whatever the hell these're supposed to be. 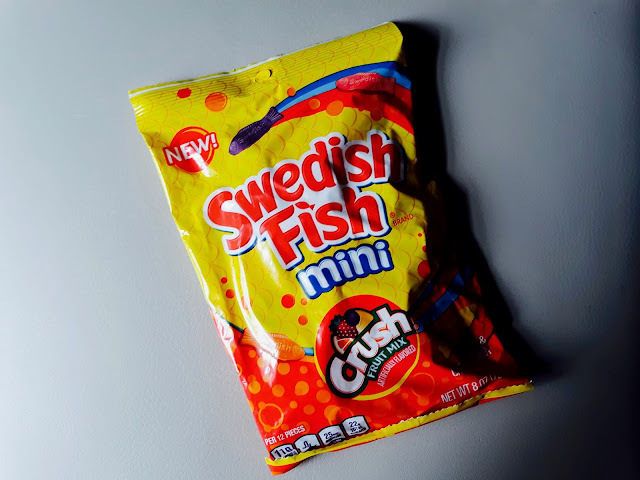 Alright, so far this is as close as I've come to finding anything soda-related this season, which, as extremely sad as that is, the silver lining is that these aren't bad. I mean, various fruit-flavored gummies mixed into a single package isn't exactly cutting edge Willy Wonka technology, but when you put a soft drink logo on anything from bubblegum to lip gloss, I get glad all over. 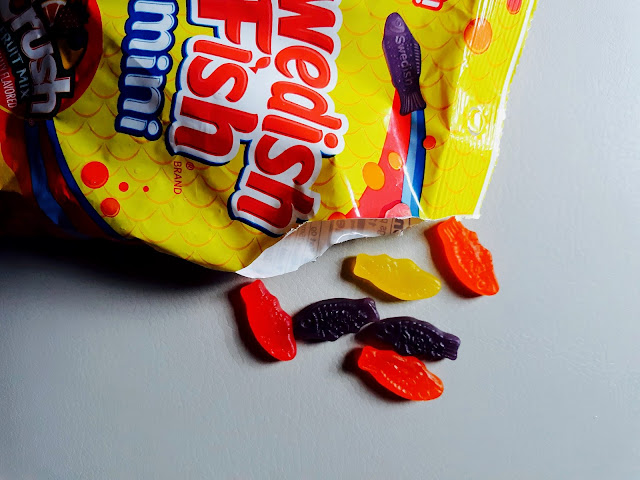 I can probably say that I can't really tell the difference between an Orange Crush-flavored fish and an ordinary orange fruit-flavored fish, so who can argue. But I will say that while all grape-flavored things are poison to me (especially grape soda), the grape fish are mildly tolerable -- which is huge praise coming from me - you don't even know. 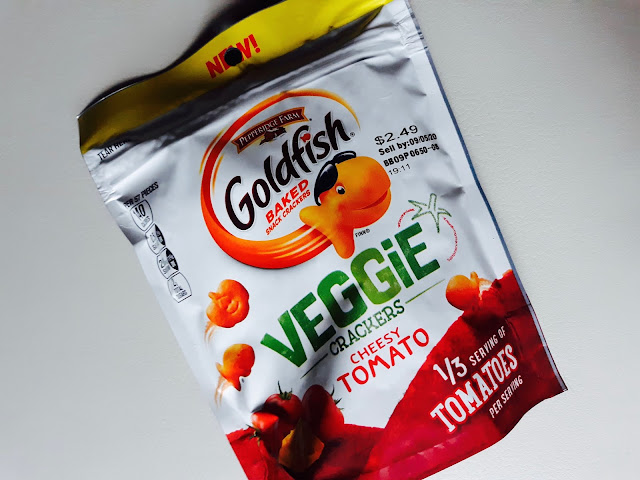 I'm a fan of most baked cheese crackers - I mean, what kinda monster isn't? - but Pepperidge Farm Goldfish always seemed a little too subtle and polite for my taste; their standard Cheese-flavor is pretty bland, and you gotta slam, like, twelve of 'em to get the same satisfying mouthfeel as one Dorito. Fortunately they come in new and continuously changing flavors, and the latest is these Veggie Goldfish with "1/3 serving of tomatoes." I'm not big on tomatoes, tomato sauce, or ketchup, but tomato-flavored crackers usually hit me at the right angle. That, plus the flying vegetables on the bag make it look like Super Mario Bros. 2! 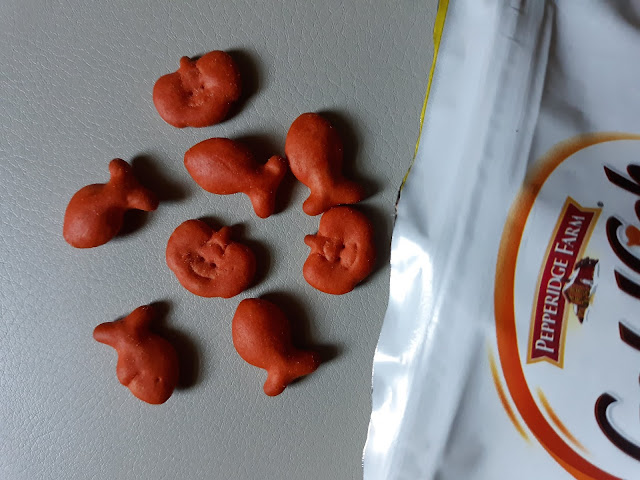 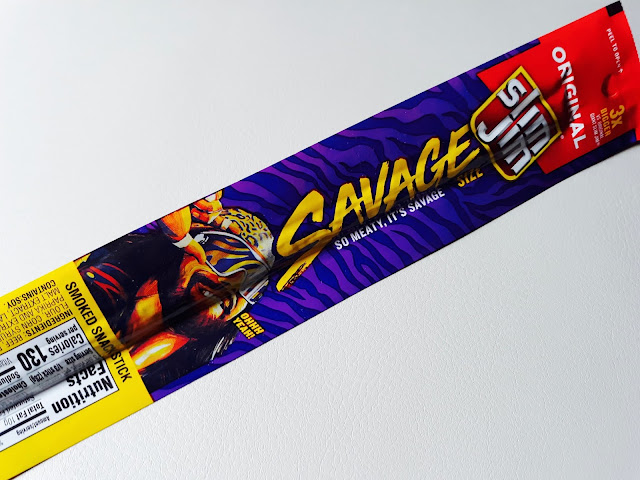 I admit it: I'm a whore for pop culture tie-ins. If they put Darth Vader on bottles of Garnier Fructis, my hair would be noticeably and intoxicatingly soft for the rest of my days. But! the deal with Slim Jims kinda went in reverse: I don't like wrestling or wrestlers, but because Randy "Macho Man" Savage was the spokesman for the brand, he was always cool with me. Now, he's got his own commemorative stick of meat, and I couldn't be more pleased. 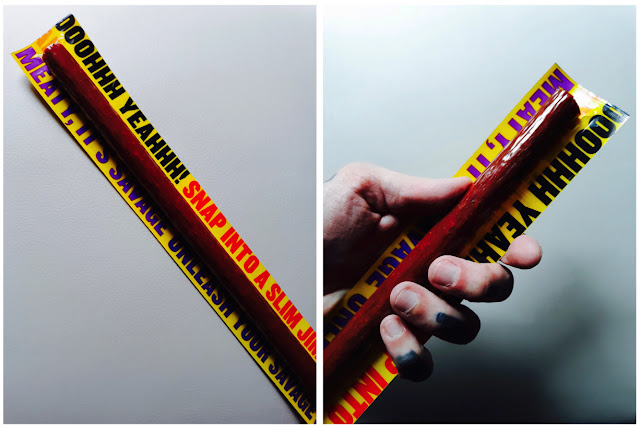 There's really no eloquent way to put it: it's the same length as a traditional Slim Jim, but considerably thicker, and even though it's "original" flavor, the thickness convinces you that it somehow tastes better. The inner wrapper covered in "Macho" phrases in various Nintendo Power fonts also add to these mind games. But the real showstopper is that the store I bought these from had them displayed in this: 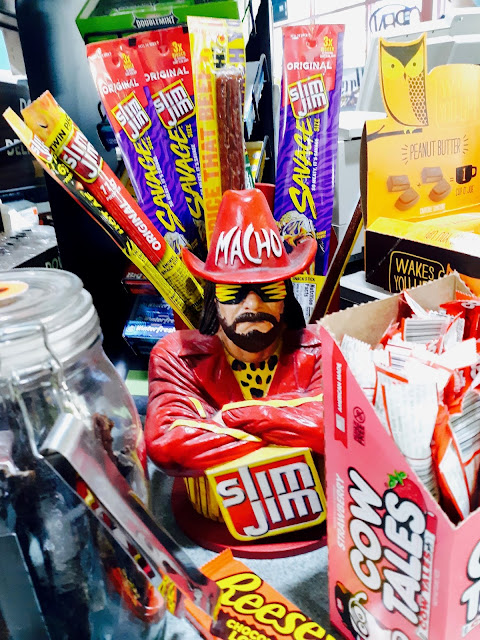 I've seen these cups around for quite some time, but I feel like their true purpose has finally been actualized. I even went ahead and checked eBay in the hopes of getting myself one -- apparently they range from $50 to $250. So, on second thought, the Slim Jims I buy never really last long enough to constitute an entire Randy Savage meat caddy.

Thanks for reading about lifestyles of poor white trash. May you all have Cheez Ball wishes and Cotton Candy Bubble Yum dreams.