TOYS ARE US : Novelty Credit Cards 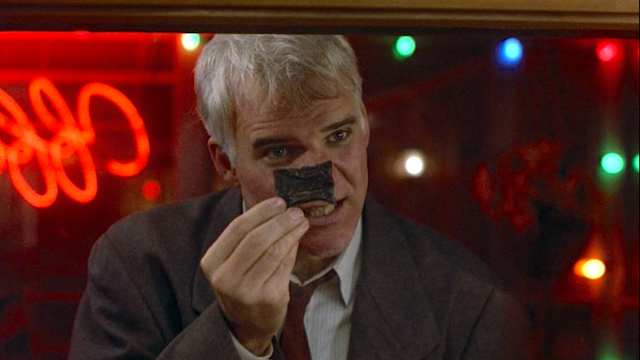 Money is a fascinating thing to a child - if for no other reason than you can turn it into action figures and bubblegum. (In other words, the standard monetary system as we know it.) And when you get some, the most adult thing you could do was graduate from the piggy bank (especially paper money) and keep it in your very own wallet.

I had such a wallet (as previously discussed), and like any wallet, there was a wide pocket for bills, and then a handful of arbitrary slots that had no real purpose to an 8 year old. Frankly it was too much wallet, and as happenstance would have it, it was around that age that I acquired one of the most beautiful (if not somewhat impractical) artifacts that I still have today: my Scrooge McDuck money clip. 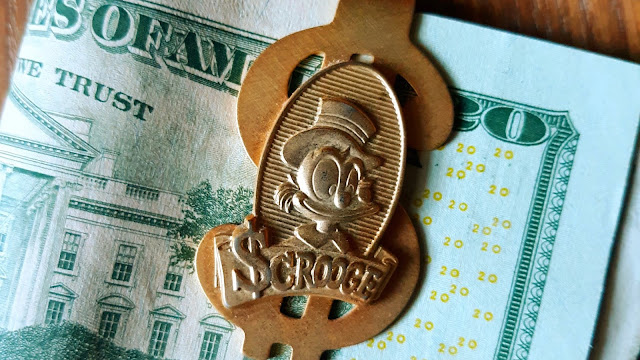 I used this very sparingly: 1. it was a bitch to handle with my clumsy young fingers, 2. I was afraid of losing or breaking it, as it was worth way more to me than whatever money it clipped, and 3. I very rarely had money to clip it to.

But I've gone way off the rails on a crazy train here, because I soon discovered something worthy enough to fill the empty slots of my wallet: Novelty Credit Cards!

At least, that's what I think they are - I wasn't entirely sure then and I'm still not. I stumbled upon them at Walden Books, mixed in with the bookmarks. But I really don't think they're bookmarks - these things're heavy duty plastic & would put quite a strain on the binding of any book. I mean, these things literally have no other purpose other than the most logical explanation: they were made for someone just like me. Not that I had any interest in credit cards, or even the idea of credit cards - quite frankly, the concept sounded quite stupid and dangerous to me: "Get it for free now, and pay for it a little later." And I doubt I was even aware of interest rates!!
But still, these things were little masterpieces of art that I could have on my person. And I did like the clickety-clack sound of the thick plastic; it was never about fooling myself or other kids that I had disposable income -- like anything in my life ever, it was just about visual and auditory pleasure.

Here are 5 that I still have. 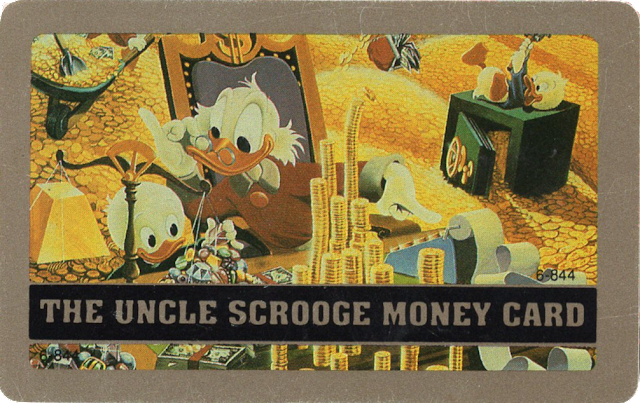 That was a perfectly painless transition from the money clip. In fact, I think I'm even more enamored with this card. I actually think I love this card more than most things in my life. See, the biggest appeal of Uncle Scrooge (and the comic books and Duck Tales in general) was the possibility of getting a glimpse of some cartoon gold or treasure - and those were consistently pretty good odds. And to have this shiny, durable card with me at all times was both exciting and comforting. 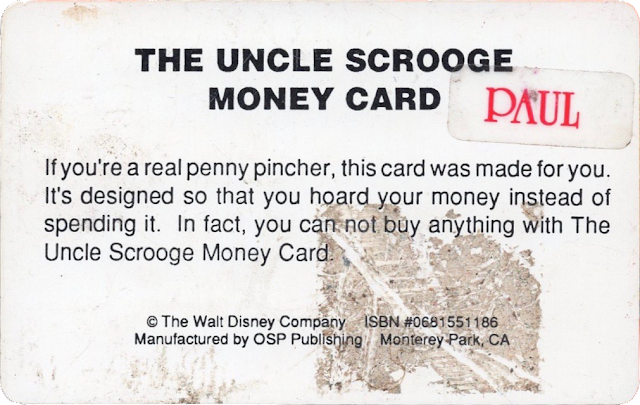 I'm no Nabokov or Miller, and I wish I had the words to eloquently emphasize the sexiness of these precious stones and gold coins because they deserve some kinda sonnet or cinquain or something.
For now we'll just call it "fuckin' tits!" 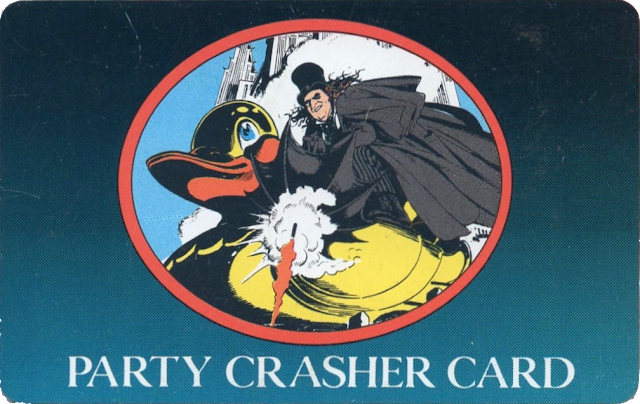 I'm not sure if I've ever mentioned it before, but Penguin merchandise was hard to come by upon the release of Batman Returns - everything was dedicated either to Catwoman or the Caped Crusader himself. So when I saw Penguin stuff, I nabbed it (or I begged and cried until nabbing occurred). 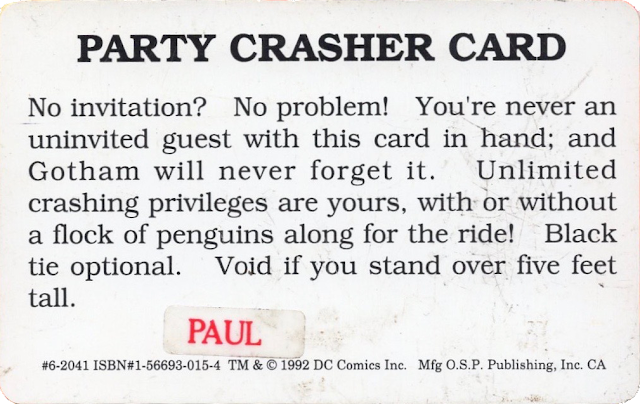 The jokey little disclaimers on the backs of these things never meant much to me, yet somehow I felt confident that this "Party Crasher Card" would, in fact, be my Fidelio to any gathering I was aware of. Of course, no one ever made me aware of any parties. Ever.


Dinosaurs You Will Encounter 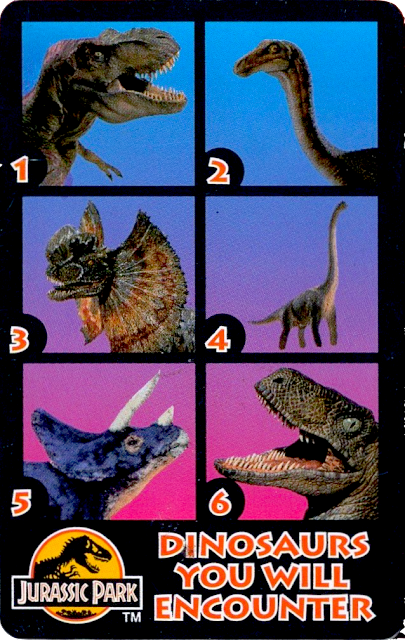 This stuff is the best kinda stuff, and it was the best stuff to come outta Jurassic Park; McDonald's, trading cards, and posters also followed this model that speaks so loudly to me: these sorta 'statistics/name, rank, & serial number' kinda charts that let you know who's who and what's what. 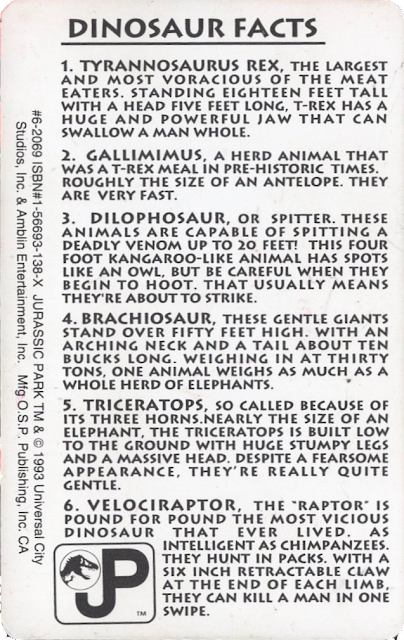 I suppose this was a handy card to carry if you ran into one of the six species that were featured in the film & needed to plan accordingly. I'm also a fan of the New Wave/A Flock of Gallimimus gradient background behind each Dino head. 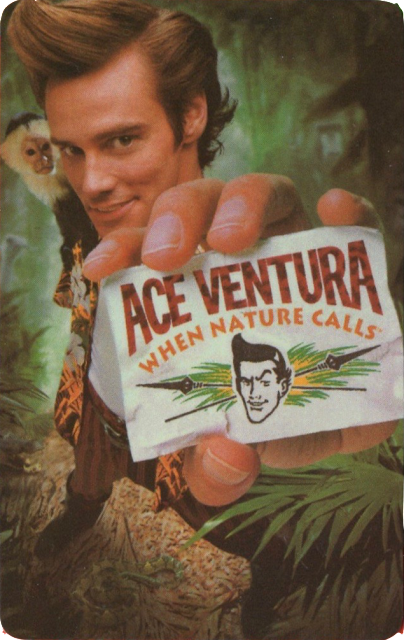 I'm sure this is the last of these silly things that I bought, and I'm sure it was an impulse buy; part of me knew I'd outgrown these (I was 12 by that point), and they'd already become nothing more than a point of nostalgia for me. 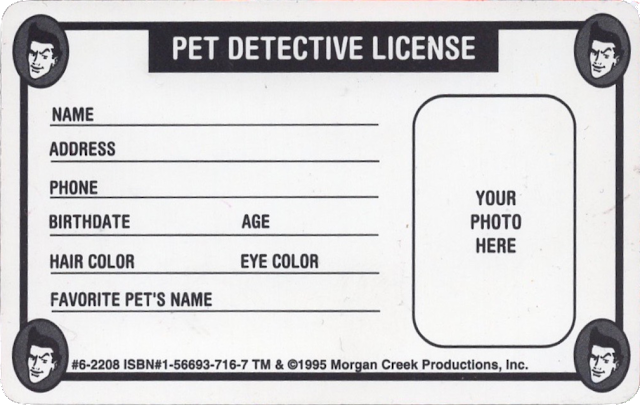 Not to say I wasn't a fan (I kinda was), and to the best of my knowledge, this was the only real tangible 'toy' from these movies that I ever saw in the wild. 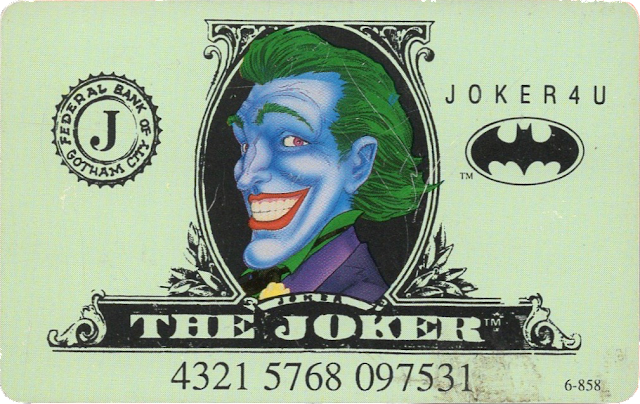 Conversely, I think this was the first one of these I bought - and it's the pièce de résistance as far as I'm concerned. I've written about my love of The Joker and why I love him probably 20 times by now, and this particular illustration of him is one of the best examples of where my infatuation derives from. 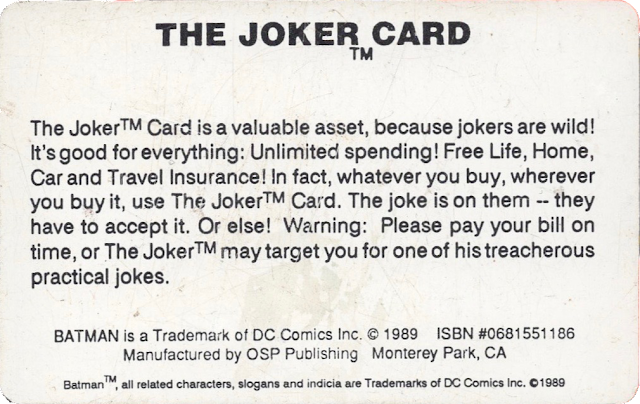 When I look deep within myself, I realize that it really is mostly about color coordination - I mean, the guy's a rainbow, and this sorta softer depiction of him adds some nice blues to the spectrum.