If you're reading this, I applaud you: whenever there's the promise of a list, I generally scroll past introductory bullshit like this until I land on the list itself. And then, depending on the content of said list, I might go back to read what possible nonsense some census taker has to add re. their "reasons" for their infallible lineup.

If that seems cynical, you just ain't seen n-n-nothin' yet. While this should be an excellent (if not the only) opportunity to sermonize about the decade that was 2010-2019, I'm going to hold my nose & take a big step back & let the list speak for itself... And it certainly can; if you are reading this, you're a bigger person than I, sure, but for you, faithful readers, I will provide some mild insight as to a few "hows" and a couple "whys."

I'd compiled a Top 100 of the past ten years, and even from a distance, the bottom half was a bit of a stretch -- it seemed unfair to the upper, better half to include (what was clear to me) 50 movies that wouldn't have been 'list worthy' under any other heading apart from that they were released in the past ten years. Their initial inclusion caused the Top 50 (which, even still, shoulda been a Top 25) to be that much less prominent and impactful.

Let's face it, I didn't care so much for film from this decade. But! I promised I wouldn't get into that, and 2.) I'd hafta do some math, but I think the 10s had a better & broader output than the 00s - which is encouraging to me.
There were a handful of filmmakers that I suddenly & sharply became aware of.
The mainstream Horror genre became more cerebral and atmospheric than it had been in decades.
RomComs ditched the 'Com' suffix (mostly) and we suddenly had some beautiful love stories.
And while it's not relevant here (though on some others' lists it absolutely has been), some of the best filmmaking has come outta TV shows. Good or bad, I'm not really sure, but it's certainly an omen of how the next ten years will play out. In any case, these were some of the highs of the decade, and that's all we're focusing on here today.
In fact, you shouldn't be focusing on this at all. If you've made it this far, God bless you, but seriously, stop readin' & start skimmin' the list so you can cry about all the omissions, snowflake. 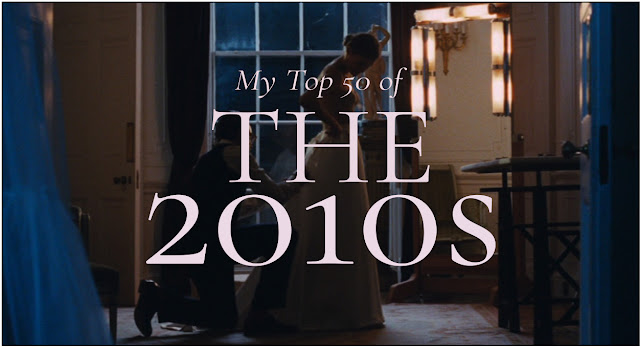 Surprised by:
no Coens
Mud over Take Shelter
Haywire
Predators in the top half
Blue Ruin over Green Room
Neon Demon in the top 3
Room 237
West of Memphis

Was very much being honest with myself, though I suppose honesty can be embarrassing sometimes. But I'm surprised that others were surprised -- I thought this would generate a lotta eye rolls regarding its alikeness to everything I've ever posted.

I liked the 00's better, personally. I feel like the recession negatively affected the first bit of this last decade and the intense political climate the back bit. Some strong years in the middle however (2014-2016).

is this the only decade list we're gonna get? or one from J as well?

the wheels are in motion

if she DOES decide to make one: check out Under the Silver Lake before you finalize the list. considering your shared love for It Follows and her particular fascination with the water symbolism/imagery, it may 'answer' some questions...