We take colors for granted. You can put certain ones together, create a fingerprint, and move someone. You can make someone feel that has never felt. You may draw, for them, a direct line to a secret special memory that they hold close to their heart, churning their nostalgia in the cauldron of their spirit. You might turn them on; making them wet in their panties or hard in their jeans, and creating new energy in the universe. Truly gifted people out there will send you to different dimensions or even the seventh circle of hell.
Filmmakers only wish they could be painters. How much easier our lives would be if we could create our vision with one singular image - conveying all emotion. We require a more visceral experience to deliver our messages. At least the great auteurs do. And then we can send you to that special otherworldly place too.
To see painting the way it's intended you create a moving image in your head. That is if you're doing it right. You are connecting, deeper, deeply, with the artist. Together you're going on a real trip. To see God. To know why a star is born much the way a living being is. To attempt to understand love the way we seem to grasp hate. To touch someone else without feeling them. I feel these on a deep spiritual level. And they make me wanna make.
- Jess
1. "The False Mirror" Rene Magritte (1928) 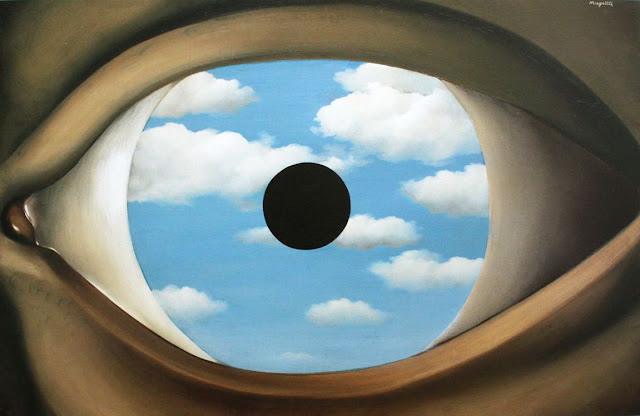 Eyes are very important to me. As a spiritual empath, I search for hidden layers with you. You can't hide from me like you can most everyone else. I know you deeply before you even speak a word.
2. "Painting" Francis Bacon (1946) 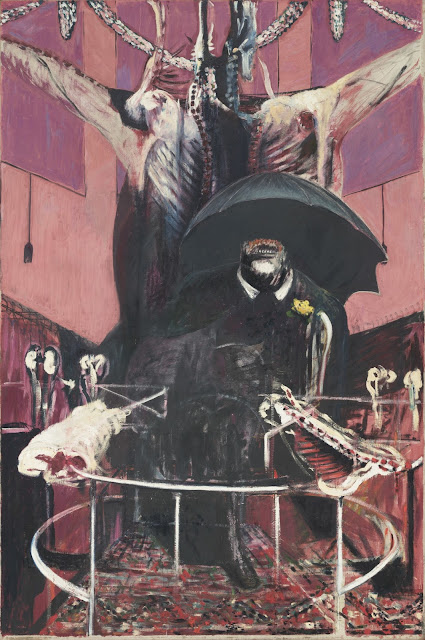 The well-dressed creature shields its eyes from me as it presents its crucification of the wild and free. Littered with red and damnation, and adorned with with the bones of the pure, the three-shaded room of Hitler beacons you.
3. "Witches' Sabbath" Francisco Goya (1798) 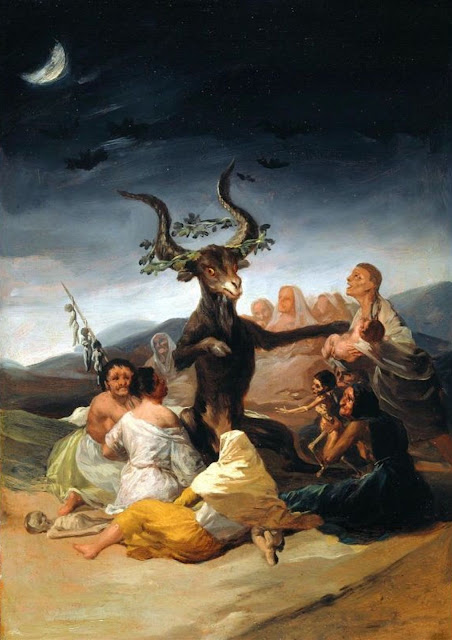 A pastiche of disfigured women, a very desperate skeletal child, and a fresh pink newborn offering all kneeling before The Beast. He looks at us in the eyes and assures his power over you. He fills your head and whispers, "All things come to an end."
4. "Dreams Caused by the Flight of a Bee Around a Pomegranate a Second Before Awakening" Salvador Dali (1944) 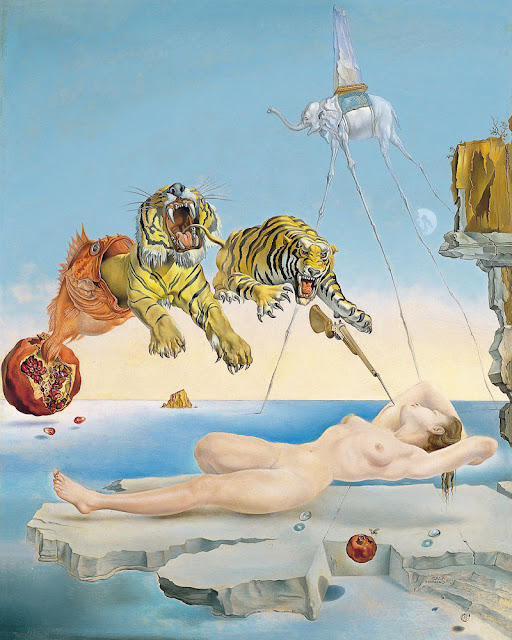 The forbidden fruit is taking you over. You saw it sitting there for so long, so pretty, so unattainable for so long. It could longer remain contained. But just a single bite has dire consequences. They're coming to eat you alive. And the greater-enlightened around you will look on in horror.
5. "Garden of Earthly Delights" Hieronymus Bosch (1515) 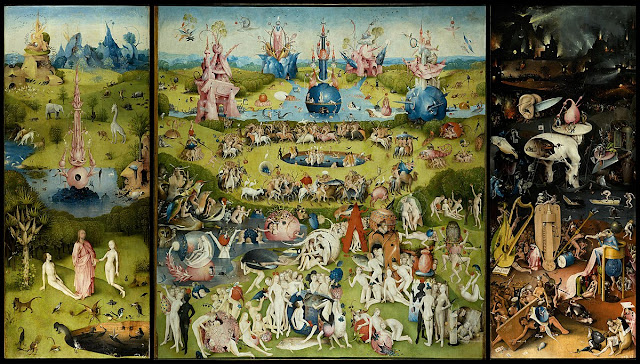 This is a different land occurring simultaneously as our own. There are some similarities to our existence, but this fairy tale has heavenly cherubs and alien crustaceans. Every being is existing together harmoniously, for a time, until it turns on itself, destroying the enchantment. Is it impossible for things to be purely good forever? Can we not stand together and remain bathed in beauty and light? It hurts me that things have to be so cruel and there's no hiding from it.
6. "Syzygy" Leonora Carrington (1957) 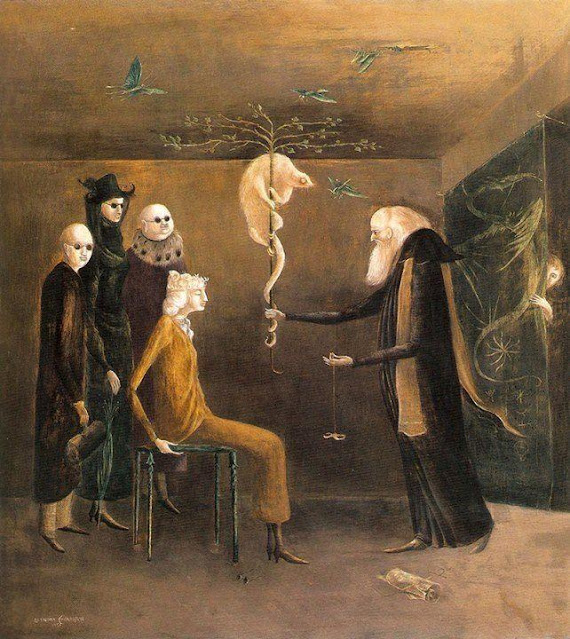 Transactions occur between apparitions stranded in the afterlife. How else are there multiple hauntings? And while they once bore a human suit, what remains is an eerie unnatural shape with the illusion of features. Things exchanged among them will be equally ominous and misunderstood. Maybe now that I've seen it, I can be less afraid.
7. "Eine Kleine Nachtmusik" Dorothea Tanning (1943) 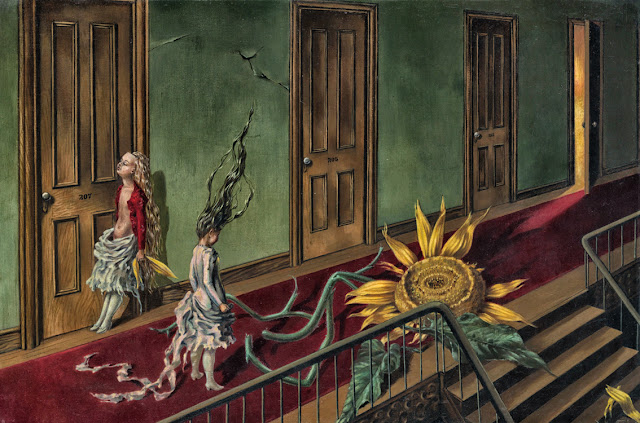 The monster in this story is womanhood. It attacks abruptly and transforms you into a higher being. It's at first a shock, like plunging into the frigid ocean on a frozen January morning. You're naked and cold and there's no one there to comfort you, except your skimpy towel. Then you clumsily navigate your adolescence trying to fathom it. Things feel differently inside. You're deep. And touch is overwhelming. You crave it more than words can say. And once it happens you can never go back.
8. "Kiss of the Sea" Octavio Ocampo (?) 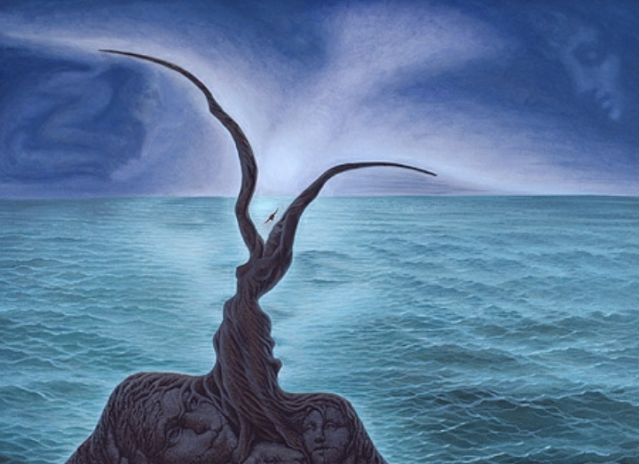 Everything can become something else. Just open your eyes wide and remember that you once had a wild imagination. Forgetting to hold onto this is humanity's downfall. As children we saw everything differently. Magic was real, and when people were bad, you could pretend to send them to faraway galaxies. You can say I'm naive, but I think peace lies within the ability to return to that very special place, and see a person in the clouds.
9. "New York Movie" Edward Hopper (1939) 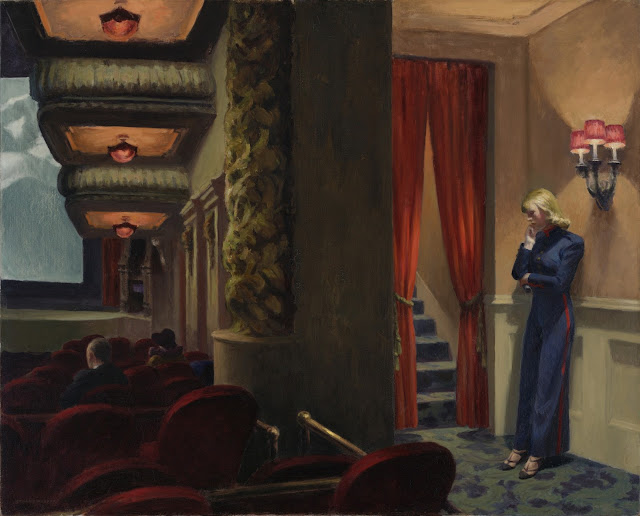 Will she sit alone again to watch the feature? She contemplates sitting beside a lovely stranger to share the experience. Maybe they'll like her. Even take her hand. She wants to be touched tonight. It's a growing fire within her. The warm tones surround her and they will engulf her blue hues, leaving her ashes behind.
10. "The Two Friends" Francis Picabia (1941) 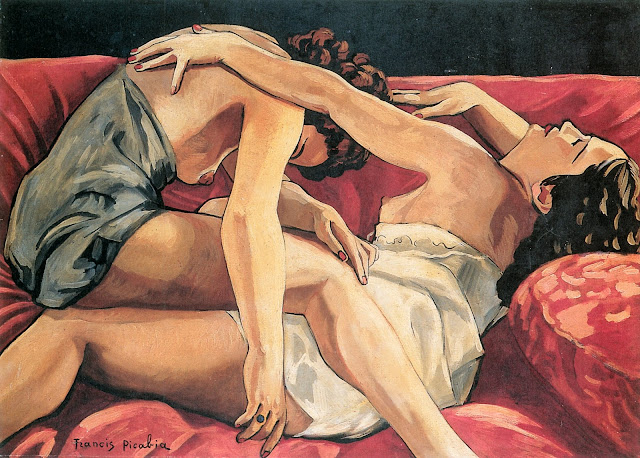 This is that single moment just before the eruption of ravage begins. The woman on the bottom pulls her near with fiery lust, her body giving permission. Begging. And while we may not be invited to see the entire dance, the artist kisses us with enough steam that we can paint another picture. Save it for later.

Many of these artists would make my top ten. Bacon, Magritte, Carrington, Bosch, Hopper and Goya specifically.

I came across Leonora Carrington after checking out a collection of her short stories. It's one thing for an artist to master the form they chose, but to master two- painting and writing- is rare. So envious. I recommend the story White Rabbits.

Bosch's famous Earthly Delights triptych is always a treat to look at. At first the entirety of it is overwhelming, but following it from left to right, we see how the beauty is right on the border of an abyss.

Dorothea Tanning and Octavio Ocampo are artists I have not heard of before and I am grateful for you sharing their work here. Ocampo's Kiss of the Sea reminds me of the Sphinx Gate in NeverEnding Story.

My favorite Hopper is always in rotation but New York Movie is up there. No other artist is able to capture that sense of loneliness and isolation we feel when our spaces overtake us.