You need to understand: in 1989, any product that featured the likeness of Mario, Link, or any of their associates, was immediately more desirable and effective. Didn't matter if it was cough syrup, tax forms, or rectal thermometers - once they slapped that Nintendo logo on there, it became an officially licensed key that got you that much closer to their 8-bit fantasy world. 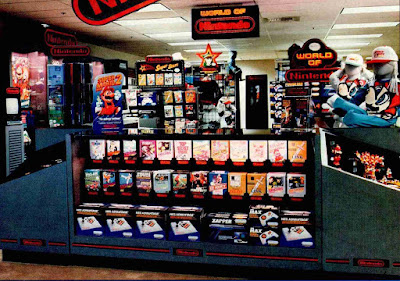 And these examples are not far off. The company released a handful of tangible "toys," but unlike, say, STAR WARS or Ghostbusters, Nintendo was the toy, so the merchandise they offered was both broad and weird. But, if you've been following this particular series, you know that anything and everything of cultural relevance wasn't entirely relevant until they got their own trading cards. And a cultural empire of this magnitude would predictably be handled by The Topps Company, in the form of Nintendo Game Packs. 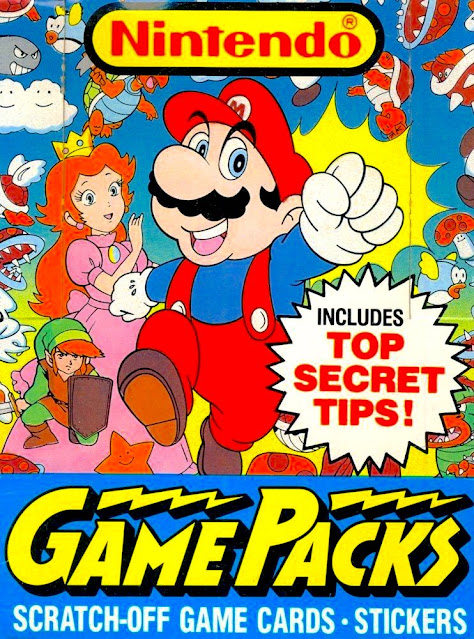 Easily the most boring, clinical name ever bestowed upon anything having to do with video games or bubblegum cards. But at the same time, it also kinda works because there's never really been such a literal grouping of words applied to this medium. To reiterate, the gaming console was the real toy, so the marketing team and concept artists and everyone else involved in the inception of these cards clearly decided that static artwork on small squares of cardboard was an inadequate representation of the source material. In other words, trading cards belonged to our parents, but we were growing up in the techno future. Consequently (and this is the editorial part), these little brightly-colored masterpieces of 1980s pop culture were compromised and corrupted by little gray invasive scratch-off circles. Observe: 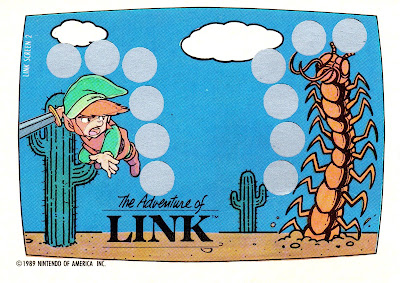 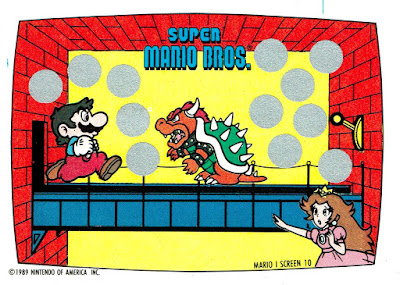 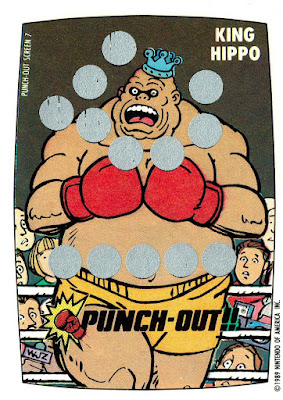 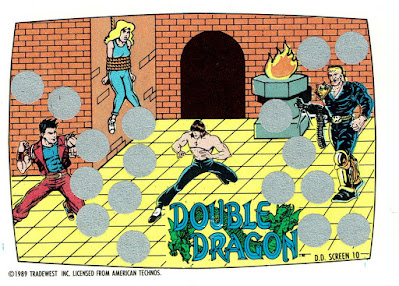 This should've been the most magnificent card series ever gifted to us by our corporate masters - but they went ahead and fucked it up and contaminated the otherwise-sexy concept of transferring the games' booklet artwork onto small, manageable canvases. What a waste. I don't even remember what the scratch-offs revealed - I didn't care. I was too distracted with melancholy and rage.
So, because of this, the cards were never really the draw. Par for the course, the series also included stickers, and it was anything but a "subset." Other card series (depending on the subject) would average out around a total of 11 stickers to amass. Power Packs offered 33 stickers(!) as part of their complete set... and those were the salt & ketchup on these undercooked fries, and they're what we're gonna look at.
Every one of these stickers depicted a "classic" image, but these are 4 that I can actually talk a bit about.
- Paul
#1 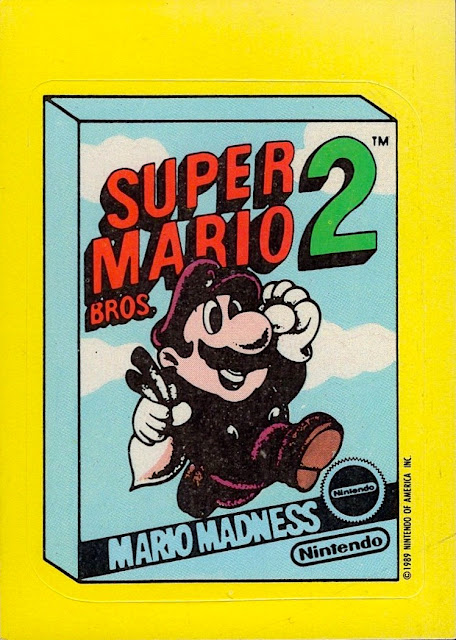 Well, they did it. They've gone and put a box on a sticker - and I, for one, couldn't have been happier. I never miss an opportunity to point out that the Super Mario Bros. 2 cover art is one of my favorite creations in any medium; the blues & reds & pinks & greens all gelled together into some sorta soda/cereal/candy hybrid that resulted in love at first sight on a momentous evening at the video store. 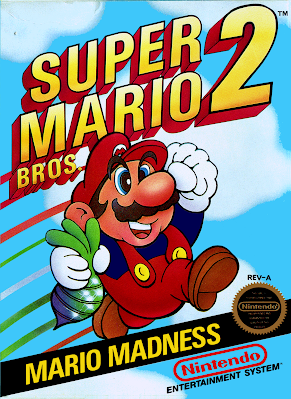 This sticker, on the other hand, is a bit of an unfair downgrade to the original's luscious luster. Still though, the composition is in tact, and I can't get too bummed on the whole screen print Pop Art vibe.
#2 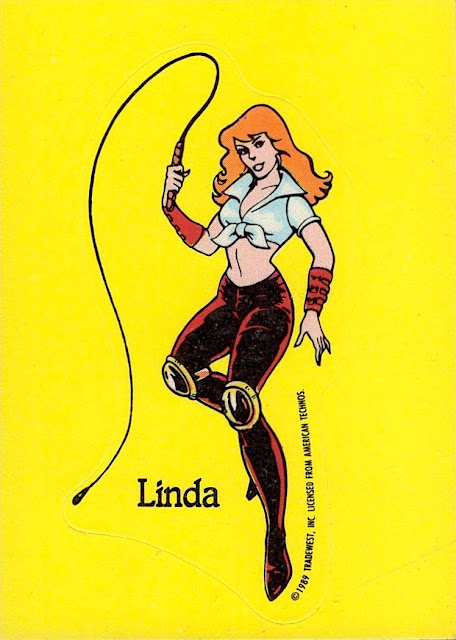 Out of context, this is some pretty provocative stuff here - particularly the whip. And apart from the addition of color, this is exactly how she's depicted in the Double Dragon manual. Sadly, they're both confusingly inaccurate; the gameplay physicality of Linda was way cooler & more badass. She looked less like a Charlie's Angels iron-on and more like Lucinda Dickey in Breakin'.

To be honest, had they illustrated a more precise portrait, I think we'd be talking about a tattoo here.
#16 I don't remember ever seeing dreamy-eyed Mario in any of the game manuals, but it sure worked well for the Nintendo Valentine's Day cards. Those were remarkable in & of themselves, and most of these stickers pay tribute to them in more ways than one. 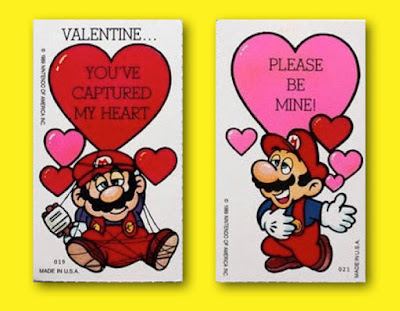 But the sentiment in this one is just so innocent and precious; at the time, we had no way or cause to adorn tattoos or bumper stickers, so we'd peel & stick this to the cover of our Five Star so our classmates could know just how we felt.
#17 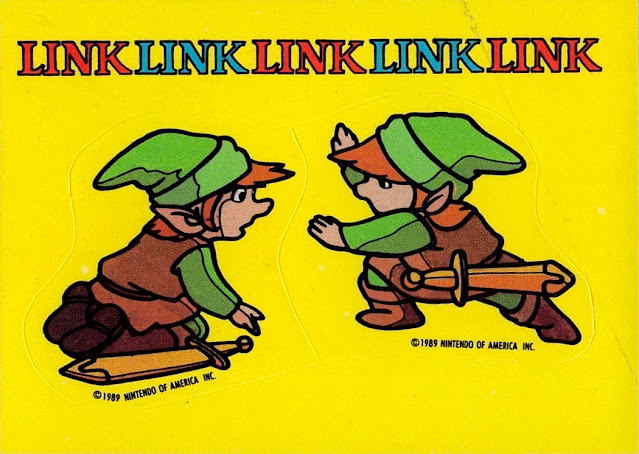 They weren't entirely particular when it came time to decide which images they were going to repurpose. Frankly, without the context, these are some awkward stickers. 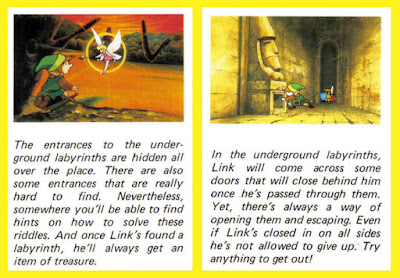 Incidentally, the coolest part isn't even the die cut portions: the repetitive "LINK" border is an effective piece of art that was probably discarded once the stickers were peeled & gone. Me, I would've extracted it in some way and used it for something -- probably as a template for a tattoo.