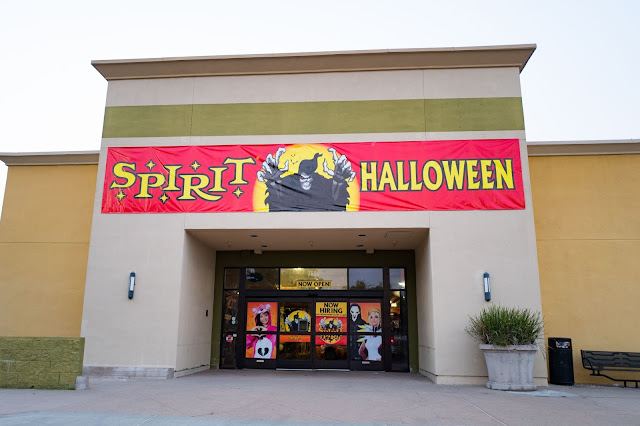 Spirit Halloween stinks. Always has. And just to be safe, I'll very quickly explain to anyone who's not been to one or not heard of it: Spirit is a "seasonal" retail chain of Halloween costumes, decor, etc. that manages to move into vacant store locations large enough to accommodate their inventory, and then close up shop shortly after the holiday.
What is pleasant about the place is that its very existence has become a familiar cue to welcome in the festivities - the same way that bitter cold and influenza are inseparable from Valentine's Day; it sucks, but you'd be sad without it.
I hyperbolize -- I mean, it is lovely to have an entire store dedicated to licensed Horror movie merchandise (even if it is only mainstream, original flavor-stuff). And if I didn't know any better (except that I do), it is, by definition, the exact kinda retail establishment that I could only fantasize about as a child. I've briefly discussed my powerful lust and fascination for Mario's Magic Shop that appears in Pee-wee's Big Adventure (and every other "magic shop" in any other movie or show I've ever seen), and like an agnostic addict in recovery, I couldn't be certain that such a magnificent thing could ever exist in this universe, but I had to believe it did in order to carry on. And incidentally, in my late teens, I discovered that such a place did exist - and it was in the next town over from where I'd lived. 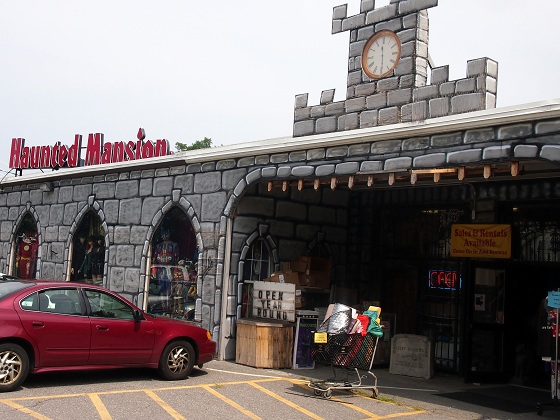 I wasn't sure how long Halloween Costume World in Fitchburg, MA had been open before I'd caught wind of it, but its product line had clearly been accumulating for decades. An honest-to-god K-mart of masks, makeup, props, toys, wardrobe, decorations, and then more masks, the whole thing was just way more everything than I was able to imagine. And apart from the seasonal "Haunted Mansion" wing in the back, the store was open year-round -- which most likely was a key factor in its eventual bankruptcy and closure in 2014, and a definite factor in my bitterness toward the hypocrisy of supposed "Fall fans" and "Halloween junkies" who bitch all Summer long that they can't wait for colored leaves and Hocus Pocus, but not enough to support a mom-and-pop spooky boutique that deserved more business than Amazon and Etsy combined. I don't care where you're from - you should've gone.
I, on the other hand, shopped it like a grocery store - particularly during college when various low-budget productions called for zombie bite marks or Civil War costumes. But necessity aside, if you decorate your home the way I do, then this was your blood-soaked Ikea.
I wish we had more visual aids, but you can smell the ambience in some of our past photography, posted here and here... and here.
So yes, I was spoiled - Halloween Costume World ruined me for all other costume shops, and all present and future lovers will live in its shadow - which looks like it's pretty much gonna be Spirit until the end of time -- leeching off of dead hosts while they themselves impervious to death. And yeah, we'll go there every year, because like every other terrestrial store you can physically walk into, your "choices" are fuck or walk, and man, we're only human: so what if the merch is lame and the masks are rubbish and the overall mood of the "store" can best be described as a "Going-Out-Of-Business" motif? But you can still be playful and clever and work with that: the fluorescent lighting and yellow linoleum and the entire ramshackle traveling circus plan-o-gram they got going on could be some kinda front for an Are You Afraid of the Dark-type premise where children are kidnapped and forced to pose as all the animatronic lawn ornaments that never sell, and then they're just packed away until next year.
- Paul
p.s. if you don't know how it is, here's a bit of Spirit Halloween for ya: