Creature in a Supporting Role

Sometimes, as Dr. Alan Grant has taught us, the attack comes not from the front, but from the sides.

These aren't necessarily 'background' monsters or obscure 'blink-and-you'll-miss-ems.' These are the mini bosses, the guys & ghouls that keep the scary momentum going, warming us up for the headliners. Some of them stole the show, some had no real plot function, some didn't even really have a name, but our favorite movies and worst nightmares would suffer from their absence.

In a movie full of cartoon ghosts, demonic possession, and a Godzilla homage, this is the only real zombie... if that's what he is. Tough to say - whatever he's made of manifests from the sewer and finds its way into the exhaust pipe of a taxicab, so now the cab is haunted(?). If that's the case, that's more exciting and original than we've given it credit for. And he just looks so awesome. 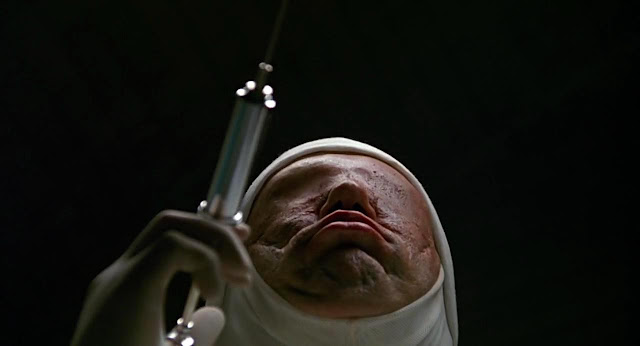 I don't suppose this movie actually has a lead villain - but I suppose that's the point. I'd be tempted to say it was this guy due to his popularity in connection to the film, but in his one second of screen time, he really seemed more like a henchman to me - just waiting for his cue to drive needles into people's brains. 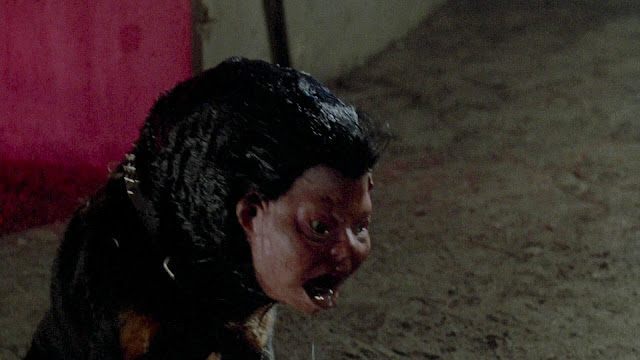 Dogs with human faces isn't an entirely new concept (the '78 Body Snatchers certainly comes to mind), but this attempt at what was clearly a pain-in-the-ass practical effect was pretty effective - if for no better reason than it forced you to do some thinking. What exactly are these things? I know Freddy's a shapeshifter, but these seem a little off-brand for him. Also, the bulk of this movie is spent in reality, away from the dreamworld, so these creatures' existence and function is blissfully peculiar. Just more reasons why this movie is such a blessing.

Ok, hear me out. I could make the case that these nominees don't always hafta reside in the paranormal realm, and they also don't hafta be the antagonist. And while he is the Sloth "victim" (John Doe would contend that term), his sinful past adds as much depth as you'd find in all the best monsters - from Frankenstein to Fred Krueger. But I'm just being polite here - I don't really need to explain why this is one of the most terrifying things ever put on film, because it's not just visually arresting, but the context of what's going on here has haunted me for 25 years.


Whatever the hell this thing is
- Twilight Zone: The Movie 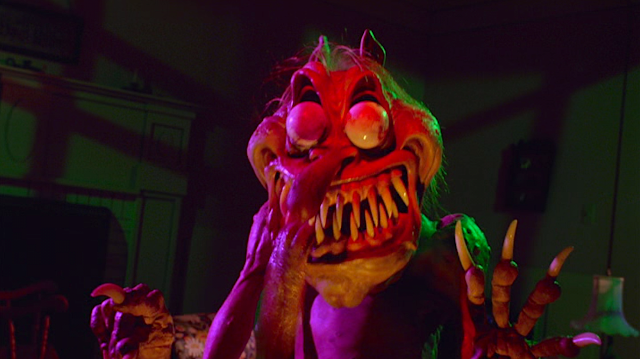 Let's be honest: we all know the main baddie from this flick is the Heavy Metal Sky Demon that waggles its finger at John Lithgow. And let's continue to be honest: the Joe Dante segment has cooler, scarier stuff than The Howling and two Gremlins films combined. I'd say Joe's portion of the movie is something you can point to that sorta sums up his whole aesthetic: Looney Tunes, but creepy.

What proceeds is a parade of Rob Bottin monstrosities that are as colorful as they are upsetting -- but this thing, with its white eyes and joyous grin, was scariest to me not just because of how it looked, but also what was left to the imagination. Not that there's anything subtle going on here, but while this guy looks like he could do some damage, we never really get to see the carnage he's most likely capable of - but I was sure it involved a lotta spraying blood & guts.