It's never easy to drudge up an excuse to talk about Fangoria, but Godzilla help me I'll never stop trying. This, however, presented no challenge, since I've been sorta writing it in my head for roughly 25 years.

The magazine had been publishing readers' polls since I-don't-know-when, but starting in 1992, the winners were announced in a public ceremony titled "The Fangoria Chainsaw Awards," held in Los Angeles at the magazine's annual "Weekend of Horrors" convention. 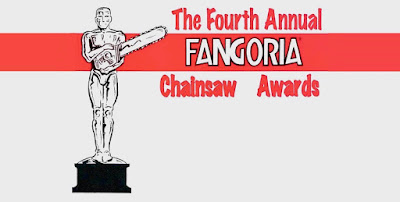 In the familiar Oscar fashion, the awards celebrate the best of the year - as nominated by Fangoria and voted on by fans - with the standard 'Picture,' 'Actor,' 'Actress,' etc. Also like the Oscars, the list of nominees could be a little wonky sometimes: obvious mainstream choices mixed in with "who paid to get that title on the ballot?"

I've never sent in my choices (or voted online as it's done nowadays), but you'd better believe that every time they published the nominees I certainly had favorites. And because I've read back issues of the magazine consistently (almost daily) for nearly 30 years, I still can't help but run down the list every time I come across one and mentally make my selections. Most recently I stumbled upon the ballot for the "Fourth Chainsaw Awards" while flipping though the March 1995 issue. 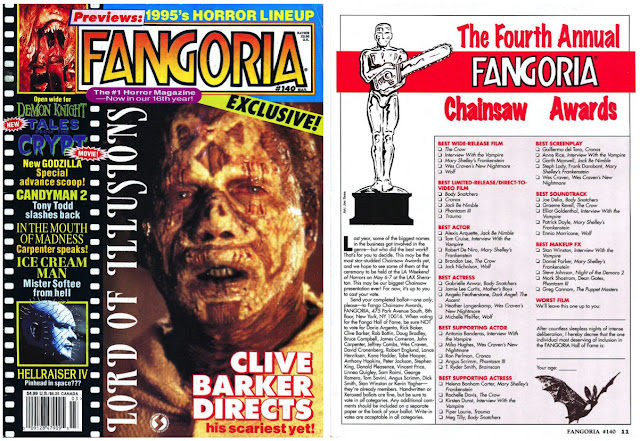 I've probably glanced at this dozens of times, but this was the first time I decided to definitively commit to my choices, which led to some hiccups; I noticed a couple movies were "in limbo" - Body Snatchers and Trauma actually came out in '93, while some would've considered the absent In the Mouth of Madness a '94 film (technically it was '95 in the U.S.). The Oscars mighta done it different, but I stuck with the lineup out of total respect for my dark master: Fangoria. Take a look at the ballot: 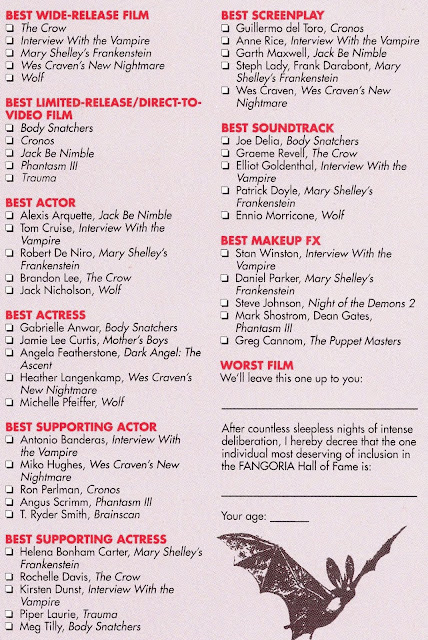 To reiterate: this is the first list of nominees that cropped up while I was browsing whatever magazine I pulled outta the stack when the idea hit me to put it down in words.

But at the same time, go back & really study this ballot: a vampire movie, a Frankenstein movie, a werewolf movie, a Freddy movie, and two kindsa 'pod people' movies. This isn't any sorta anniversary of these movies, but that's fine: our reasons to celebrate art needn't be confined to numerical factors of 5 or 10, but if you need some psychologically satisfying excuse for reading this, the awards ceremony was held almost exactly 25 years ago. Below are some of the most abrasively boring photos ever published in Fango (and that's including the newer issues!), capturing the day in May '95 that the winners were announced. 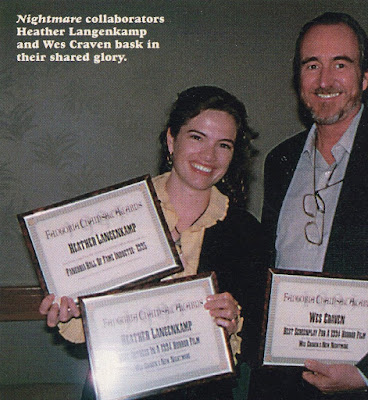 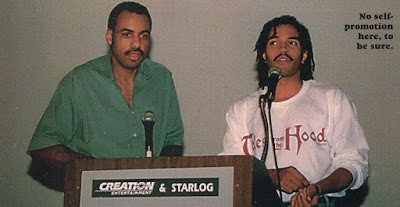 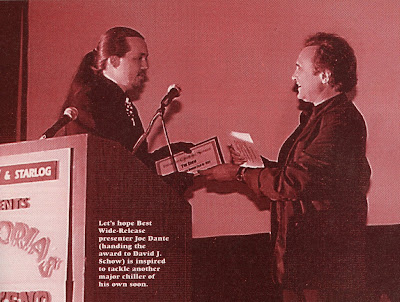 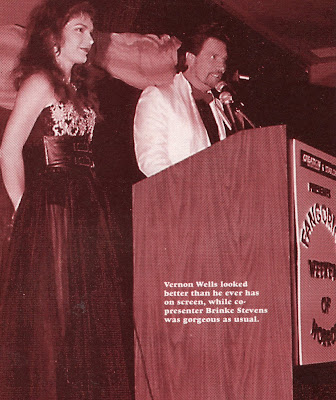 Compelling stuff I know. But forget that, who cares - this is more about paying homage to a year in Horror that was less exploitive and gratuitous than previous years, but more inventive and colorful than recent years. Frankly (at least to me), it translated into such a brief but tremendous period in the genre that there was no clear front-runner; some may disagree, but there are a lotta classics floating around this lineup, which made it blissfully difficult when it came to my votes. I mean, shit, man, I can't remember the last awards season that put me in that kinda bind. I think the best illustration of that sentiment is that the winners were announced in the November '95 issue, which was plugging the next Wes Craven movie... 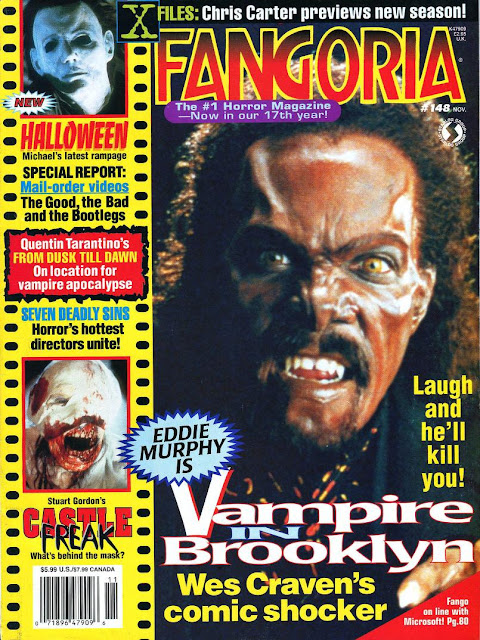 So I hope I've justified everything enough for you to be on board. And if not, I don't care - my Fango energy isn't going anywhere. Here's the list of who the readers chose, but way more importantly, the list of my choices. 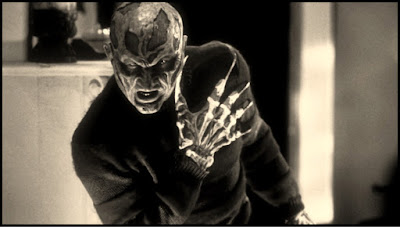 I've given my thoughts on 'the cinematic year that was 1994' before, so there'll be some repetition here. So to briefly reinstate my pledge to this particular achievement: if only - if only - every tired 80s slasher franchise could've received such a vital shot in the arm...

But that's the analytical side. It's more important to point out that, to someone who'd been told since they were 3 years old that "Freddy's not real," the most refreshingly terrifying premise of any movie that could've ever been made was: "Nope, he's completely 100% real, and you're fucked." 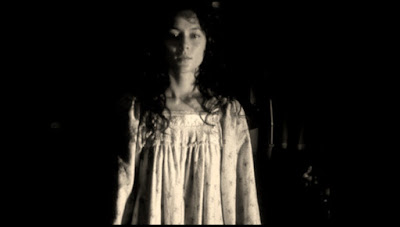 This is one of the most bizarre recipes of movie elements that one will ever come across: Abel Ferrara + Horror + Meg Tilly + R. Lee Ermey + Forest Whitaker = subtlety(?)(!)

If you're familiar with any of these ingredients, you should already have a strong taste in your mouth. The thing that struck me deepest about it is that Abel is the King of Passion; raw human emotion. So, for him to take on a now-age-old tale of humans without humanity was such a startling left turn that, for the most part, it works in a weird, satisfying way.

MY CHOICE: Tom Cruise, Interview with the Vampire 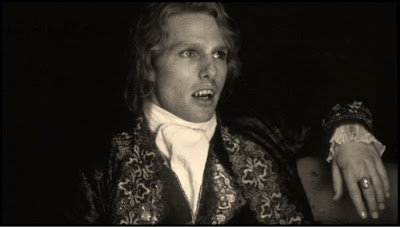 I've said it before and it ain't gonna change: Tom is this movie, no fucking argument. The movie starts when he makes his first appearance, and it ends once he exits (and no, I don't mean his second surprise appearance).

Fangoria 'chronicled' the consistent outrage voiced by Anne Rice herself about the casting of Tom Cruise (coincidentally she wanted either Julian Sands or Rutger Hauer in the role of Lestat), as well as her admirable retraction over her initial doubts. In other words, he won over the movie's toughest critic with a predictably bravura performance. 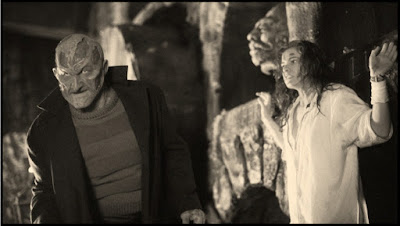 Honestly, one of the most attractive things about this movie is its sense of humor - up to & including the sense of humor of everyone who participated in such an experiment. But extra special kudos to Heather for making light of her own real-life situation involving a stalker.

That's just subtext, though. Great performance or not (it is), Heather has a presence and watchability on screen that goes well beyond the 'Scream Queen' batting average - as demonstrated in this particular Elm Street installment which is more 'Psychological Thriller' than 'Slasher' - which just makes me wanna see her in so many more things. 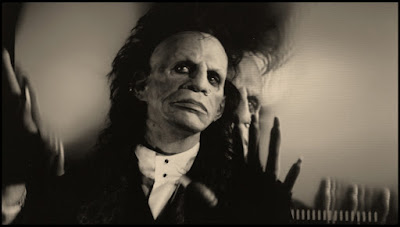 I'll be damned if this wasn't the easiest choice to make. I mean, c'mon, you know our history with Brainscan, and if this was the year that finally put Freddy to bed for real, then this should've been the beginning of the Trickster era. Alas, it wasn't.

Like Freddy, or Pinhead (or maybe even Candyman), Trickster brought the performance away from the knife & mask snoozefests that dominated the 80s with a playfully insidious nonchalance that was noticeably more understated than, say, the Leprechaun or Chucky. Sadly, the 90s would soon find its knife and mask...

MY CHOICE: Kirsten Dunst, Interview with the Vampire 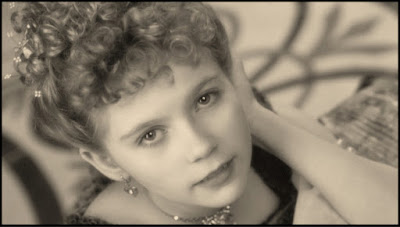 Hey, it's iconic for a reason -- and I'm not here to be sensationalistic. It's always engrossing to witness kids go up against adult themes in fiction, but it takes genuine talent on the kids' part to actually sell it & make it believable without any kinda gimmick bleeding through.

It hit me deepest because, prior to this movie, I would fantasize about the existence of a child character in '92's Bram Stoker's Dracula that could maybe be Van Helsing's sidekick - and so help me, I would play that character. 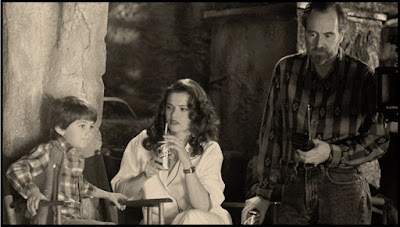 It's my favorite Horror movie of the year, and that's due largely to the delightfully clever story (though dialogue & character development were never Wes's strong suits).

By now, I'm sure you're plenty sick of my opinions of the man who invented Fred Krueger, but he'll always get a hall pass from me on this flick - not just because it was a cool idea, but because of the simple fact that he brought us even more Freddy when we'd been told that he was 'Dead' for good. 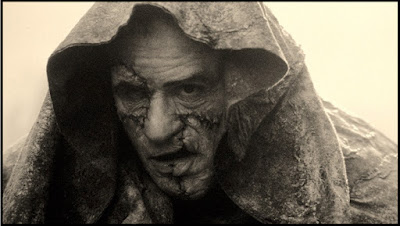 If anything, this Frankenstein adaptation was a diet version of the 1992 Dracula (Coppola did produce it), and the score is a huge part of that -- meaning that the music is as good as the movie (which is damn good).

It was tough not to throw Wolf any bones, but Ennio Morricone's score for it was borderline irritating. Patrick Doyle's Frankenstein score, on the other hand, provides the operatic grandeur that Branagh was clearly going for. Listen to it on its own - you'll be pleased. 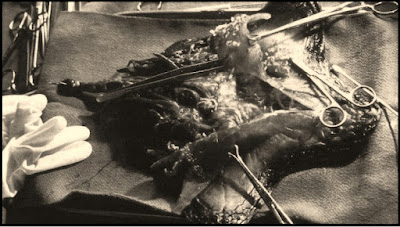 This movie is painfully absent from every category here, but this is no pity vote. Not so much an 'aliens-imitating-people' movie like all the Body Snatcher adaptations, but rather an 'alien-parasites-controlling-your-mind' movie - and the parasites are creepy and believable enough to give it the edge against the other nominees.

Expert FX aside, this movie is one Action Extravaganza of a romp! It may not've had a ton of competition against this slew of gothic horror, but man, if you're looking for a movie to make the popcorn go down smooth, look no further. 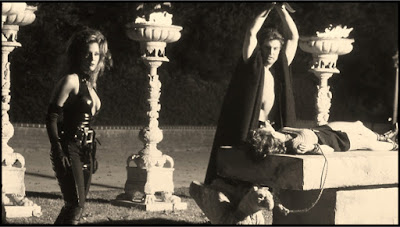 I fucking hate Ghoulies - not sorry. I mean, Ghoulies II is pretty ok (and so is Leprechaun 2 actually), but Ghoulies and Ghoulies III stink, and part IV was hardly an improvement. Though I would say it's better than III - if for no other reason than - like Troll 2 - it has absolutely nothing to do with its predecessors (in that it has almost nothing to do with "Ghoulies" as we know them).

Can't really argue with this, I guess. Even by '94, they'd already inducted every Horror legend you could think of - from Dario Argento to Dick Miller - and since then they've welcomed everyone from Emily Perkins to Rob Zombie.

But when I think of Fango as a concept, I think of their heyday and what shaped them (and how they, in turn, shaped me). So then who better to honor than an Elm Street resident and a Crystal Lake camper? On my imaginary ballot (which is now real, kinda) my write-ins are Mark Freddy's Revenge Patton and Deborah F13 A New Beginning Voorhees. 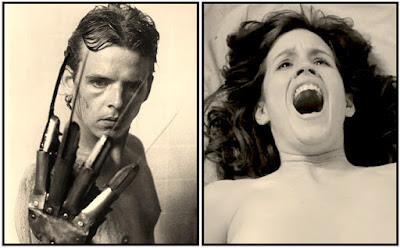 I sure hope this has inspired you to make your own choices in this very important election. If not, thanks for indulging me with this and many, many more things like this to come.

This post hit a nostalgia sweet spot for me. The March 1995 issue of Fangoria was my first exposure to its gore filled pages. I remember the ballot contained inside for the Chainsaw Awards. Oddly enough, the film so prominently featured on the cover, Lord of Illusions, has eluded me. Not for lack of availability. It's a missing piece of the puzzle I plan on seeking out this Halloween season.

Your choices for the most part mimic what I would've chose. New Nightmare not only is my pick for Horror Film of the Year but is Wes' peak as a writer/director. The Kevin Williamson penned riff on meta-movie slashers seemed redundant when I saw Scream. Wes already achieved what he was trying to say with New Nightmare.

Lastly, the 1992 Fango trading card set became a big thing for me after the magazine obsession. Collecting compact illustrations of Fango covers made me want to seek out the back issues that much more. The only other trading card set that had a bigger pull on me were those of Tales From the Crypt.