Whipped Cream and Pickles (but no anchovies) 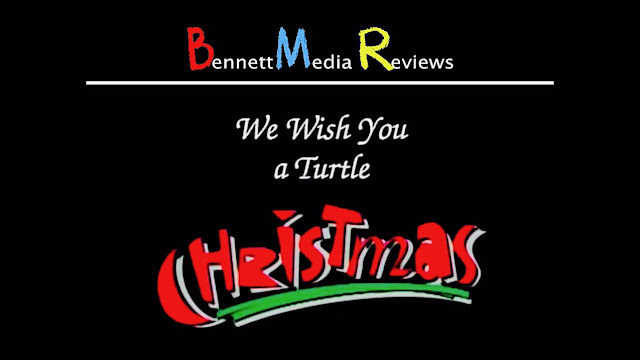 Y'know, one could determine ("one" being myself) that the 1990 Teenage Mutant Ninja Turtles movie is, to date, the most artistically competent and unaffected chapter in the vast empire that is that franchise. In terms of tone and execution, all that came before demonstrated the drastic poles between punk underground and Saturday Morning sugar cubes. And everything that came after, well... I've been calling attention to the heartbreaking misstep of Secret of the Ooze since its release in '91 - when they replaced the two most engaging characters/actors from the first film with a stuntman and Vanilla Ice, spoiling an otherwise solid sequel. I've given enough thought & time to Part III (which is nearly none of either), and apart from fringe-watching the 2014 Michael Bay-produced feature, I've seen or been interested in nothing else.
Well, not nothing else... 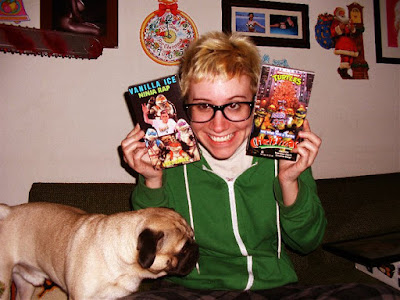 For Christmas of 2010 I bought Jess two sealed VHS tapes from I-don't-remember-where: the video single for Vanilla Ice's "Ninja Rap," and the 1994 direct-to-video special We Wish You a Turtle Christmas.
This was a period during which we were simply acquiring; if there was something we didn't have, we had to have it, so we got it. So, we now had two sealed Ninja Turtles VHS obscurities. And over the course of the past decade, we parted ways with roughly 90% of the treasures we amassed from that decadent phase. But, for some reason, those two tapes are still with us, and on Christmas Eve of 2015, we broke the seal on the Turtles Christmas tape. (The Vanilla Ice tape remains wrapped & mint, cuz who gives a shit.) God willing, we had & still have a VCR (or, as people ridiculously call them now, "VHS Players"), and as we rushed to doze before Santa's arrival, we submitted our souls to this 25 minute high school musical of a production. 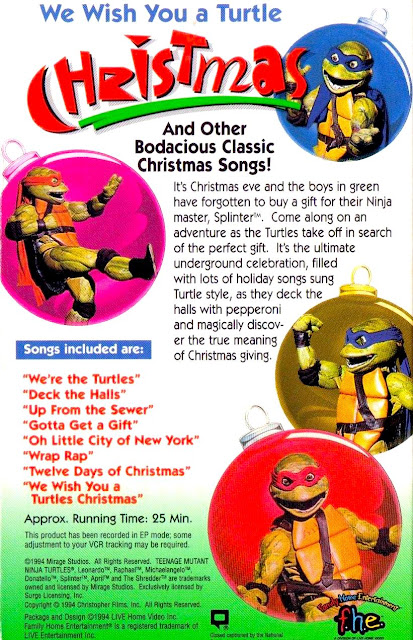 I don't wanna bore you with a premise, but: it's Christmas Eve, and the Turtles need to get Splinter a gift. That's it. Oh, and they sing while they're trying to find him one. Except their mouths don't move when they sing. And the songs are dumb, punny parodies of Holiday songs with Ninja Turtle-centric lyrics about pizza and sewers. And their faces don't really move or emote also. And none of the popular supporting players show up like April or Casey Jones. And there are no villains: no Foot Clan, no Rocksteady or Bepop, no Krang, no Tokka or Rahzar. And there's no Shredder.

I'll repeat that: There's No Shredder.

I've never seen the Star Wars Holiday Special & I have no desire to; why would I want to see an unintentional mockery of an otherwise better-crafted piece of pop? That's part of it -- the other part is that (only to my vague understanding) it doesn't portray any kinda conflict (at least not in the sense or style of the saga it derived from). Like Star Wars or Batman or an Elm Street movie, I came here for the Bad Guy - instead, we're just left with these Teenage Turtles. But, they're not the Turtles - they're not even caricatures of the original caricatures we'd become familiar with at that point. It's like someone got a sense of who they were and how they act and what they looked like, and said, "We got this." But they didn't get it; this is the crust of a pizza that you can barely tell what the toppings were. 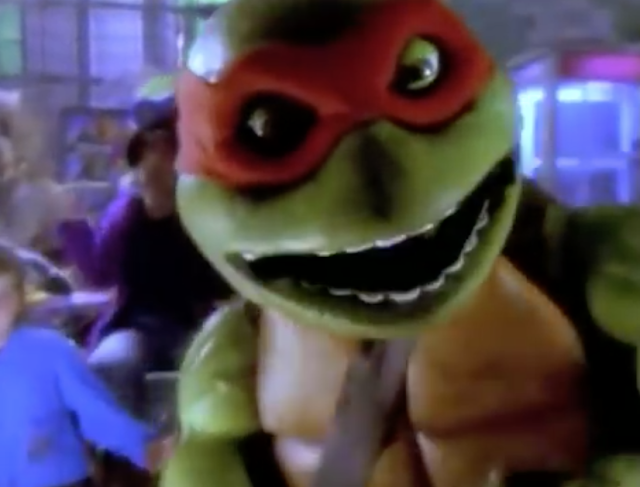 Most of what I've written here today would probably closely match the content of any & all millennial 'fan reviews' you'll find on this internet - using phrases like "frightening faces" and "so bad it's good." I don't know about any of that - it's certainly "so bad," and not in a Power Glove kinda way. But not so bad that it's boring, and that's a redeeming determinant. But the other thing, the main thing, the thing that actually has me coming back is that the video is Christmassy as all hell, and that's what we're about this month. Not attributed to anything behind the production necessarily (no one accidentally nailed the Holiday Spirit through writing or performances or any kinda pathos), but the vibe is still prevalent somehow - maybe it's the incessant sleigh bells that beat me into comfort and joy. 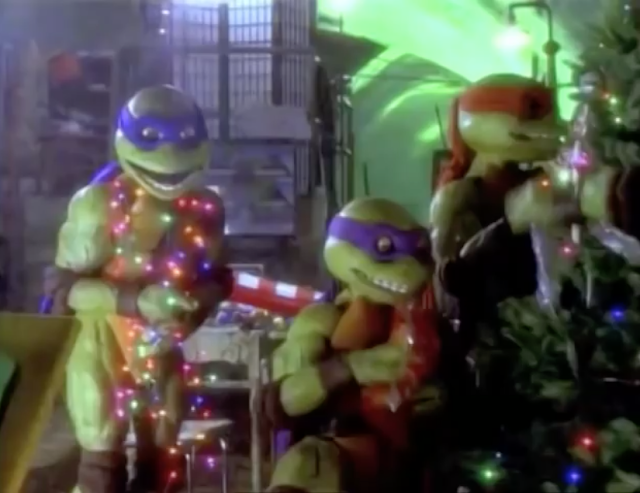 But all that's written here is prologue; the really real reason to take a look at something like this is that it's undeniably fascinating. Its failings are loud & confrontational and it's distinctly irritating at a continual pace; that's the sorta 'train wreck response,' sure. But if you consider Turtles not just as a cultural phenomenon or the money-making corporation that it is, but rather as the artistic movement that it also is: a period when all media began to borrow & emulate the tone of whatever connects to the most people. And with the experiment of We Wish You a Turtle Christmas, the test tubes shattered.

I'd post a button to send you to YouTube to watch this, but that eventually results in dead links, and I hate dead links. But it's there now for your Holiday bemusement. Or you could come to my house - we can heat up a frozen pizza with toppings you don't like and watch a Ninja Turtles video on my VHS Player that you don't wanna watch.