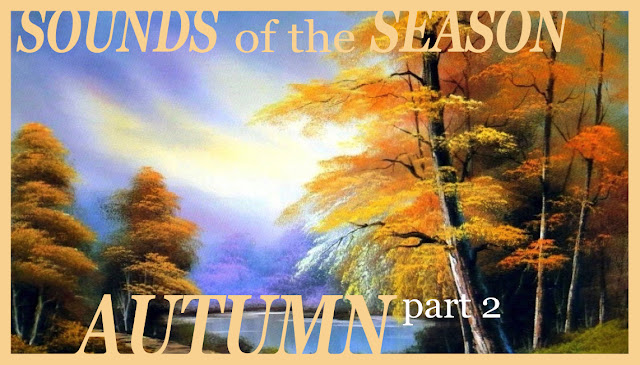 Well, we've reached the end of this Mobius loop of mood music and we're just about all outta bubblegum. As we enter the second half of fall, enshrouded in cold & darkness, we're presented with new flavors and toppings; October 2019 has been laid to rest in the mass graves of my mind, and there's very little time to mourn. So let's not!

Like I wrote last time, Autumn presents several headliner Holidays. And if you weren't aware, we dig Holidays - a lot. All traditional or antiquated beliefs aside, it's wonderful to continually have a reason to celebrate life in a way that coincides with the astonishing transition of seasons, and the majesty of nature demands a soundtrack... And movies... And movie soundtracks.

The best Holidays come with movies, and so, once again, this list is modestly populated with soundtracks, as they're the strongest aid in embracing the present. But I think we're beyond excuses at this point (and maybe even surprises too), but this series wasn't designed for debate: as usual, we can only ever hope that we've a.) provided suggestions, b.) discovered we may shop at the same store, or c.) prompted you to be more consistently conscious of the correlation between your tunes and the time of day (you know, if you weren't already).

Rounding out the year, here's Part 2 of Autumn Sounds of the Season. Keep rockin' on. 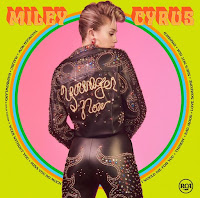 Younger Now Miley Cyrus (2017)
In 2017, for the entire month of December, I was either too cold, too tired, or absolutely fatigued with all the Christmas music the year had to offer. As a result, this album played front to back on an endless loop for nearly four calendar weeks. And so now, Summer romps and sultry serenades like "Malibu," "Rainbowland," and "Love Someone" only bring to mind early morning grays and numb fingers.
Twerk for days. 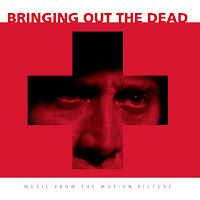 Bringing Out the Dead (Soundtrack) Various Artists (1999)
No album on this or any of the other past lists have been so viscerally, emotionally tied to a time of year than the Bringing Out the Dead OST. The film came out in November, and I nearly-simultaneously obtained the soundtrack, and this collection of songs in this order became the mood of my existence, and that mood carried over well into the following year. The album is eclectic but still within the boundaries of Marty's yard: "Nowhere to Run" by Martha and the Vandellas, "Too Many Fish in the Sea" by the Marvelettes, and two cuts from The Clash. But nothing elicits the taste & smell of my then-teenage angst like the movie's unofficial theme song - Van Morrison's "T. B. Sheets."
Naw, it ain't funny. It ain't funny at all, babe. 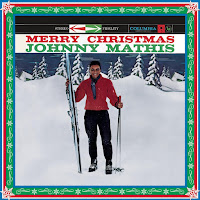 Merry Christmas Johnny Mathis (1958)
Alright, let's get down in it.
There's no short list of "definitive" Christmas songs or albums - every artist has their own and each one is somebody's favorite. I'll usually say this one's mine - mostly for his version of "Sleigh Ride" - but this album falls into that category I like best of flippy-flopping between Pop Xmas ("The Christmas Song," "Blue Christmas") and the spooky religious stuff ("What Child Is This?," "O Holy Night"). Johnny brings his trademark excitement to both avenues.
Still though, every version of "Winter Wonderland" sucks. 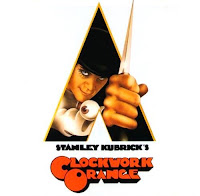 A Clockwork Orange (Soundtrack) Various Artists (1972)
This is another strong personal connection between weather/movie/movie music that may be unique to my taste, but I could still make an argument for its ambient validity.
I first took a look at the movie in November of 1995, and the damp fogginess of my own surroundings was identical to that of the near-future Britain depicted in the film. But aside from a serendipitous first viewing and matching visual components, W. Carlos's buzzy Moog moods (the "Title Music" and the "March" in particular) mirror the sinister, sadistic delight of chilly ultra-violence. Suffice to say Stanley may've had a knack for perfecting a flavor. 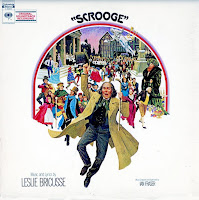 Scrooge (Soundtrack) Leslie Bricusse (1970)
Like I've talked about before, listening to a soundtrack is like having the movie with you whenever, wherever. And when it's the soundtrack to an all-out musical, you're practically watching the movie upon listening (short of actually watching it on some inadequate device). Clearly wouldn't be listening to this year-round (though songs like "I Hate People" and "Happiness" apply to day-to-day activities), but for your Holiday spirit, the grandiose "A Christmas Carol" is 100 proof undiluted milk of human kindness. 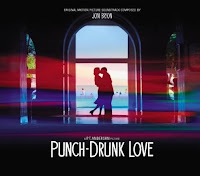 Punch-Drunk Love (Soundtrack) Jon Brion, Various Artists (2002)
The movie came out in November of 2002 (starting to smell a trend here?). So those somber harmonium notes are, in my mind, less indicative of Jeremy Blake's animated rainbows and better suited to the cold, black evenings of my sophomore year of college, hoping there was someone for me, as strange as I was... 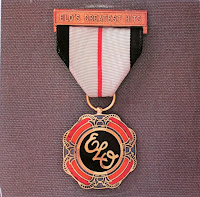 ELO's Greatest Hits Electric Light Orchestra (1979)
Speaking of collegiate despair: my very first 'student film' that I wrote/directed/shot/edited was titled Mr. Blue Sky, which prominently featured the title song, as well as the band's "Telephone Line." And nothing immerses you in music like the writing/editing process.

For the purposes of consistency, stay tuned after the list for a look at the aforementioned video. 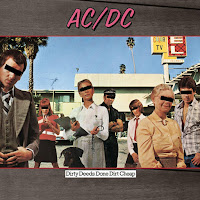 Dirty Deeds Done Dirt Cheap AC/DC (1976)
AC/DC are like the Stones in that you can listen to them in any weather and feel adequately aroused. But, on a seasonal note (which is why we're gathered here today), "Ride On" is a bluesy, rare slow burn from the boys from Down Under that even-better compliments the cold sunshine. 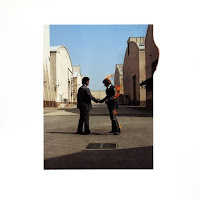 Wish You Were Here Pink Floyd (1975)
Let's face it, this album's all about "Shine On You Crazy Diamond," and my serving suggestion is blur your eyes and lose focus in the swirling brown leaves in the blustery gusts of Autumn winds. And if you don't live in the appropriate climate or terrain, just listen and imagine. Some folks prefer drugs for this song/band - the more enlightened may realize that the music is the drug.
If that sounds pretentious, it should -- I'm not really a Floyd fan. 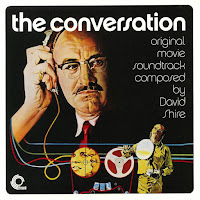 The Conversation (Soundtrack) David Shire (1974)
The movie is a 'soft' Christmas movie, but watching it every season (and its very prominent music score) has infiltrated my bloodstream in an elemental way. David Shire's score is like a main character, so like Scrooge and others, the music is a mobile version of the film, and also inseparable from the Big Holiday. And why not? The sparse piano ballads of "Whatever Was Arranged" and "The End of the Day," or the jazzy beats of "Harry Carried" and "Blues For Harry" all feel derivative of Vince Guaraldi's Charlie Brown Christmas melodies.

Marty is the king of using pop music overlaying imagery and Bringing Out the Dead is chock full of great tunes. You Can't Put Your Arms Around A Memory is one of my favorite songs and this movie is where I first heard it. The only soundtrack of his movies I like more would be Casino.