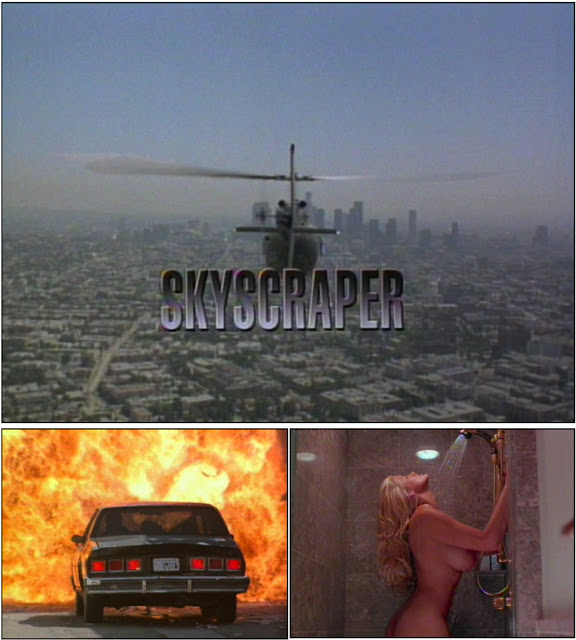 If you've seen it, or ever read anything about it (including this), you'll come across the phrase "Die Hard ripoff." Well, cinephiles, nearly every Action movie redid Die Hard for more than a decade following its release, and this ultra-low budget video delivers enough stunts, explosions, and excitement to roar with the best (and worst) of 'em. The gunplay is adequate & we get to see a few people fall off the building here & there, but there's an early sequence involving bazookas and machine guns in an alleyway that culminates into a flaming car going full-reverse through a tractor trailer and onto a busy city street, landing on a taxi (most of this shot from within the car). Say what you want about the writing and performances (as I will), but there seemed to be a higher standard regarding realism and various other visual components in this movie vs. other small pictures -- or even some other bigger pictures. I mean, this opening plays out as well as any Tom Clancy adaptation - which makes sense as the plot is also just as contrived and barely worth mentioning. So, I'll barely mention it:

Fairfax, a comic book version of a Bond villain, is pursuing some sorta video game-type objective in which he must acquire four different "devices" in order to obtain something along the lines of world domination. He has three, and the fourth lies within the 86-floor Zitex "skyscraper."
Carrie Wink (Smith) is a helicopter pilot who's unwittingly transported the army of baddies to the building, and before long she becomes the reluctant John McClane-type antihero who must thwart the villains' simplistic plan & free the inexplicably small number of hostages.


Anna Nicole is believable as the "Helliscort" pilot (I don't actually know any helicopter pilots, so why not), but the remainder of her performance that isn't delegated to a stunt person (exchanging dialogue, sneaking around with a gun, simulating intercourse) is sluggish and diluted by what I can only assume is a result of her infamous substance abuse. Even as a kid this fascinated me in an unironic way; I've always been a sucker for tortured souls and golden idols who are devoured by celebrity. It's sorta sad and awesome and beautiful and sexy and layered, and in relation to this particular movie, it's just another outrageous element that makes it as mesmerizing as it is. 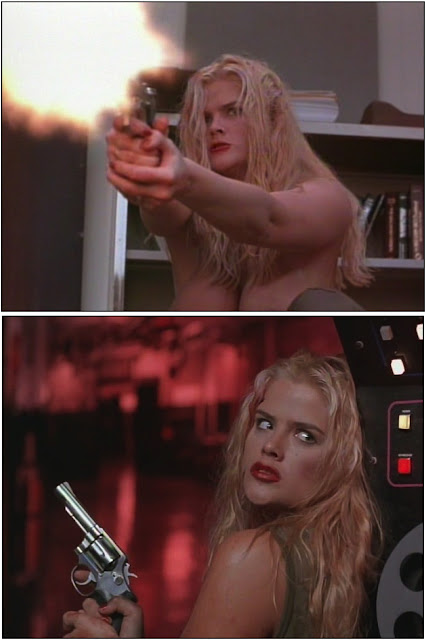 Not to be outdone or upstaged is the film's radical team of mercenaries - all of whom seemed to take a different approach as to what kinda thug/goon/henchman they were gonna bring, and the result is a colorful array of what feels like different criminals from every kinda crime movie.
But the two showstoppers are Deron McBee - who you'll remember (maybe not as immediately as I) as the male stripper who Marcy hires for Peg's birthday in a Season 3 episode of Married... With Children. More likely than that, you should recognize him as Thor! Not from the series of popular films, but the Nordic-type wrestler who threatened to body slam Larry David so hard that he'd "poop" his "bald pants" on Curb Your Enthusiasm. I'm aware he's done plenty of stuff (often billed as "Muscle Guy," or in some cases, "Muscle Man"), but far too little of his career has been dedicated to Skyscraper-type roles; he should've been blown up by Schwarzenegger at least a half dozen times. 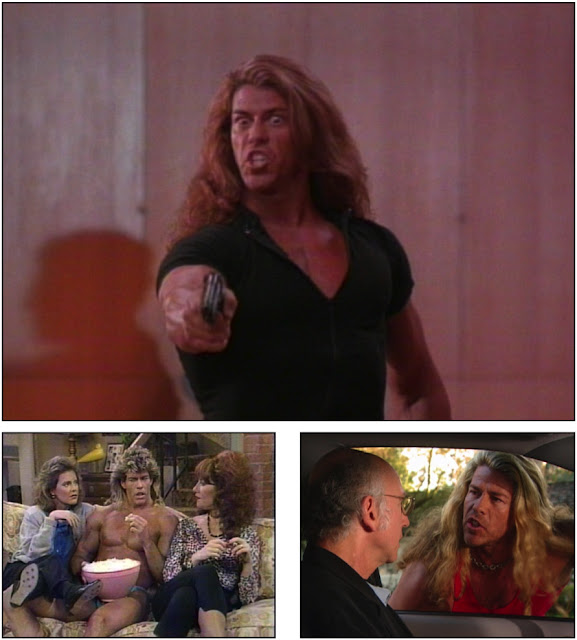 But, the whole movie is nearly entirely outdone by Charles Huber (who, very weirdly, is also credited as Executive Producer) as Fairfax. There's no easy way to describe this performance, but there are fun ways! Try Cary Grant as Gary Oldman as Winston Churchill. Or how about Ian McKellen as Sam Jackson as Bane. The possibilities and combinations are endless, and if you've seen it you understand, and if you haven't you should so you can feel what I'm talking about here. 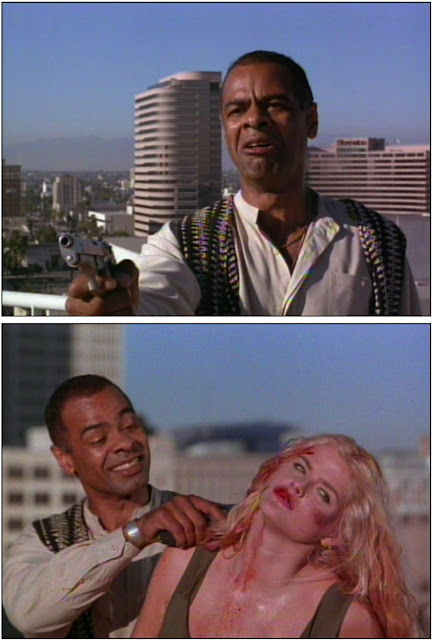 Alright. To be entirely fair and and stop kidding around: the reason this movie was made, the reason I sat through the entire thing as a kid (and many, many subsequent times), the reason I own the DVD, & the reason I write about it was, and is, the promise of the most prominent Playboy Playmate of the past 30 years engaging in Adult Content and Brief Nudity.

Despite the actual, notable care & effort that went into several aspects of this film, its two 'sex scenes' - both roughly 90 seconds long and both cut to tender love ballads by Victoria Levy (which, if anybody can find these songs for me, we can cut a deal) - are the two major set pieces of the movie. Not because they progress the narrative or they're integral to the plot -- not in a traditional sense. In terms of the B Movies and Drive-In movies and Grindhouse Cinema that came before 'Direct-to-Video,' it is, in every respect, structurally sound, and plays as perfect as the pop song that it is. If the movie had been any different or "better," it wouldn't have been as good. If the Ramones had been better musicians or if Dylan had a golden voice, they simply would've been less dynamic, less fun, less good. Skyscraper is exactly the right temperature - not only as a piece of art, but for its particular time & place: ca. 1997, 12:35 am on Cinemax in my bedroom. And every villain is Hans Gruber or Al Capone, and Anna Nicole is Batman, and the sex scenes are the Millennium Flacon cruisin' in Hyperspace.