TOYS ARE US : Savage Mondo Blitzers 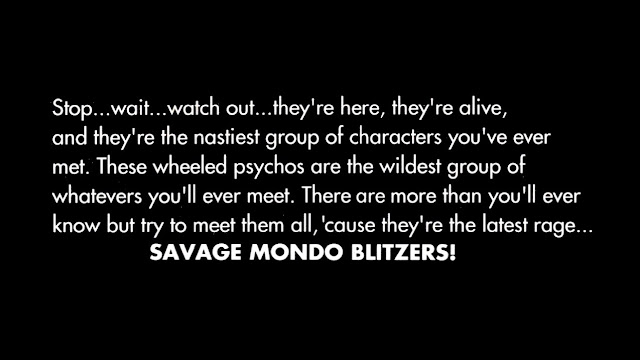 I loved action figures. But it was a very superficial romance as my lust was based purely on looks. I never "played" with them like the kids in the commercials: throwing them around a miniature facsimile of a city street, putting words into their frozen grimaces that they would never say - "Take that, Flattop!" No no, I displayed them, rank & file, like a regimented army with the most prominent players out front. They were to be looked at, not touched, and God help you if you touched them, because most of them (especially the odder-shaped ones) were not designed for standing stationary; some had to be placed in various Kama Sutra poses to maintain some sorta balance. Equally frustrating was their stubbornness to grasp any of the weapons they came with - and if you could get 'em to hold something in their firm, pointy fists, trying to depict them in a natural 'action' pose usually resulted in Batman giving a fascist salute.

These were the hardships of youth, and they didn't deter me from amassing these beautiful sculptures. And in the time I was collecting most (late 80s, early 90s), the fashions of the figures would change with the times - this was particularly evident in the seemingly-endless Ninja Turtles series. By 1991, characters like Ray Fillet, Pizzaface, Groundchuck, Scumbug, and many more who looked like mascots for a Super Soaker that squirted Dunkaroos frosting were packaged and sold to me on the basis of the Turtles brand alone. Well, not really "alone" - I may've had no contextual connection to them, but their radical concepts and gnarly colors couldn't keep me away.

And there was a tipping of the scale there a bit: my relationship with this plastic was purely aesthetic - it didn't matter what they were affiliated with. They'd become art.

Any kid who'd ever had to endure hanging out in a drugstore while a parent or guardian waited on a prescription was well aware of the 8-foot toy section, which consisted mostly of marbles, Slinkies, and other generic and bootleg playthings. And I don't know if they were exclusive to CVS Pharmacy or what, but at some point in 1991 I discovered Savage Mondo Blitzers - a shocking streak of glam punk plastic and metal that slashed & burned its way through the shelves of these drab grandma toys. And knowledgable as I was about all things kids culture, I quickly recognized that these weren't any kinda tie-in to any previously published institution; there was no built-in audience to be a part of - this shit was original, and I think that was a turn on. 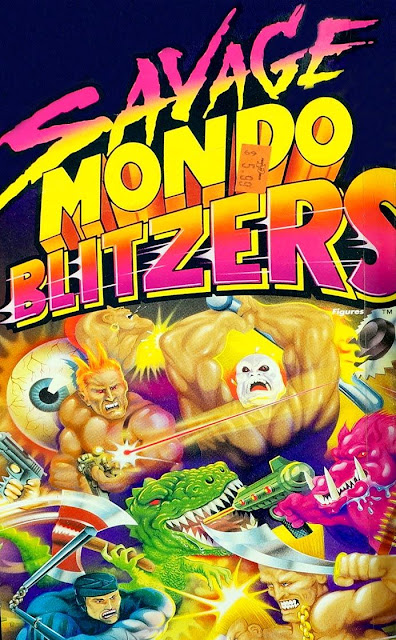 They were tiny, surrealistic pop art creations on wheels. (I could've done without the wheels - they took away from the overall beauty of each piece, and I had zero interest in the skateboarding 'angle' they were pushing. But - and it's a big juicy 'but' - the wheels guaranteed that they would stand upright with no effort at all!) They had a unified, punny cleverness to them that tapped into my childlike sensibility that I had & still have: there was a skeleton with a knife, a rock star, a gun with human features, a giant eyeball, an armored knight, and various other freaks and caricatures with badass names. Had they been the villains (or even the heroes) of a comic book, movie, or video game, it woulda been my favorite comic book, movie, or video game.

Don't think the connection is lost on me: Teenage Mutant Ninja Turtles was not the first ballgame to assemble a longwinded handle full of kid-friendly vernacular, but it was certainly the most popular at the time. And you can almost picture the ad meeting at Kenner as they mad-libbed their way through all the awesome, tubular, radical words to finally land on that one perfect counterfeit cowabunga combination: "Savage Mondo Blitzers!"

But the poetry doesn't end there: each "gang" (they came in blister packs of four) had their own menacing moniker.
Behold! 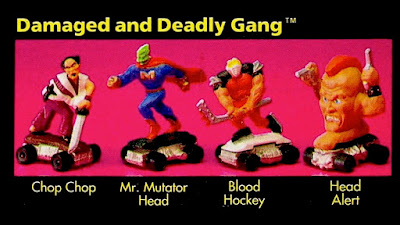 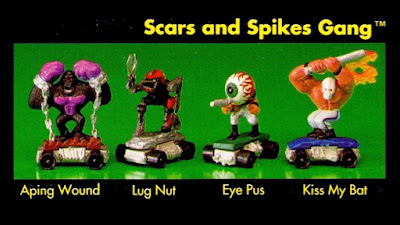 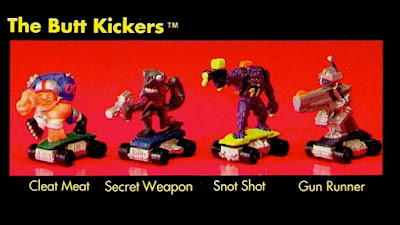 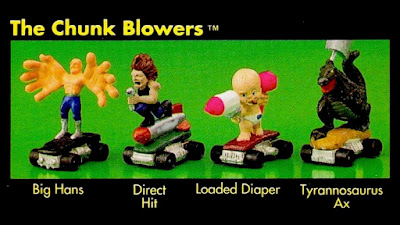 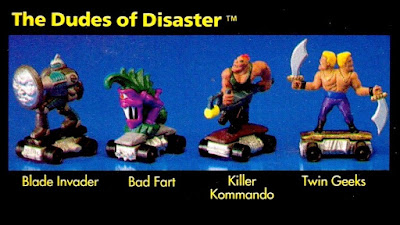 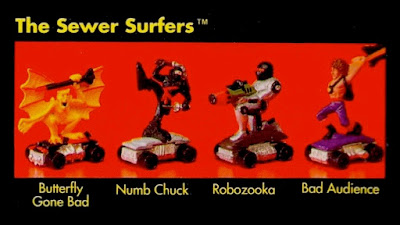 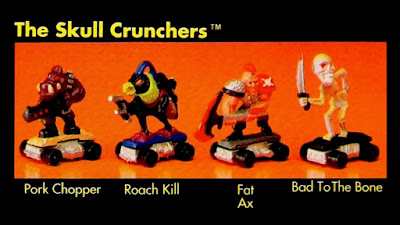 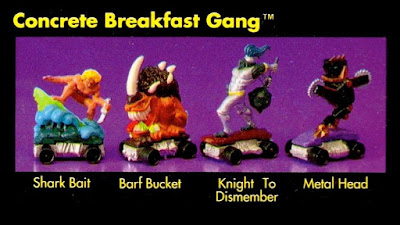 Like Dick Tracy or Street Fighter, each 'Blitzer' had a unique design, color scheme, weapon/fighting style, genetic makeup, and (presumably) motivation. Really, what it was is that they all looked different, and that too was attractive. They may've all been unified in size and function, but each concept looked like the invention of a different artist. Entirely assembled, it was a rainbow of a cyberpunk sculpture gallery.

I've seen plenty of variations and other things like these over the past few decades, and there's always been some glaring hangup that obstructs any possible interest I'd have in them: they're all too similar looking from one to the next, they're not very detailed, they're part of some larger 'game' that I have no interest in, they're blind-boxed so I don't know which one I'm getting, they talk or squirt water or perform some other stunt that distracts from the fact that they're poorly realized and aesthetically lazy.

These guys were a culmination of every Horror, SciFi, Fantasy, and Action genre-related piece of pop from that very specific time; not reimagined, not rebooted, just direct inspiration taken from extreme vibes and an empowered youth.