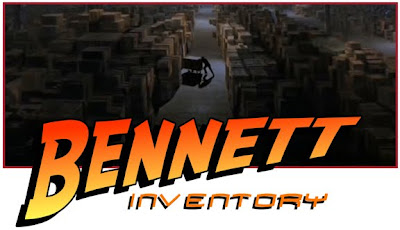 This is the first installment of The Movie Title Mash-Up Quiz.
Based on the synopsis, try & guess the remixed title joined by the common word.
Example:
Two criminals fight off vampires in a mall full of zombies.
A. From Dusk Till Dawn of the Dead 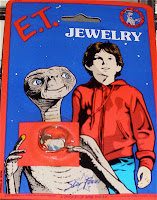 The first person to guess every title correctly will receive a vintage sealed 1982 E.T. ring! & if the winner chooses, they can send us a photo of themselves with their prize, & we'll post it right here to Bennett Media.
Make your complete list of guesses in the form of a comment. The comments will be moderated & unpublished until a correct list of titles is received. Contenders should be sure to check back often until a winner is announced.
Ready, Steady, Go
1. A man working in the film industry discovers the truth about a secret romance between a cop & a criminal.
2. A convicted pedophile learns to live in a world where no one is underage.
3. An unfaithful husband finds himself the target of a jealous, washed up children's television host.
4. A broken family experiencing the ultimate loss finds guidance in real-life divine beings.
5. A man murders his mistress & narrowly escapes to catch the ultimate wave.
6. Students in a private school are being killed off by a lovestruck law enforcer with a mental illness.
7. A death row prisoner finds redemption in wreaking havoc on a crooked sheriff.
8. A drunk failure & a homeless man survive in a city run by a generous but viscous drug lord.
9. To avoid the embarrassment of a sex scandal, a man diverts the public's attention with a bank robbery.
10. A man preoccupied with desserts eventually finds success with practical jokes & off the wall behavior.

This was tougher than I thought..still trying to get em all without using imdb. Did any get all of em?

1. Blow Out of Sight
2. Little Children of Men
3. I Love You to Death to Smoochy
4. American Beauty and the Beast
5. Match Point Break
6. Happy Birthday to Me, Myself & Irene
7. Dead Man Walking Tall
8. The Fisher King of New York
9. Wag the Dog Day Afternoon
10. Punch-Drunk Love Happy

Am I getting warm?

The correct answers are:

1. Blow Out of Sight
2. Little Children of Men
3. I Love You to Death to Smoochy
4. Snow Angels in the Outfield
5. Match Point Break
6. Happy Birthday to Me, Myself, & Irene
7. Dead Man Walking Tall
8. The Fisher King of New York
9. Wag the Dog Day Afternoon
10. Ice Cream Man on the Moon