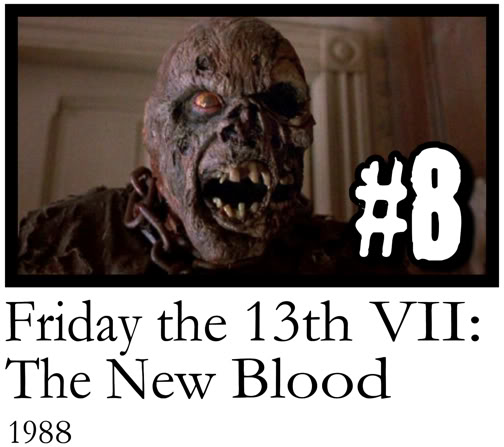 They really ran out of gas by part 4, & each sequel was worse than the next. & besides, the original is THE classic slasher movie.
MY ARGUMENT
Parts 1 & 2 are like white noise, & could have easily been combined into one movie. In fact, 1 through 4 could have been one movie.
The first two movies only had one victim -- 'campers.' It wasn't until part 3 when characters started to emerge (& by characters, I mean broad caricatures).
Jason's 'death' in part 4 (The Final Chapter) was less than satisfactory; he was stabbed in the head (...?) While in 7, he's electrocuted, drowned, & exploded. Not enough, but the noblest attempt of any movie.
Part 5 is the Halloween III of the series (though I like both movies) & part 6 is the second best.
Kane Hodder took the role of Jason in part 7 - proving that it actually is possible to have personality behind the mask, & that it makes a difference as to who's wearing it. & with the exception of his maggot-covered face in 6, this is the first time in the series Jason doesn't look vaguely like The Goonies' Sloth. The idea of Jason (or his mother) killing actual Crystal Lake Campers was more or less abandoned from part 5 on, & by part 7, the kids look more like vacationers from Elm Street. But by this point, that's what we wanna see. In part 8 (Jason Takes Manhattan) Jason didn't really take Manhattan at all. & while that's a great turn for the series to take, it's best executed in this installment.
ALWAYS BE CLOSING
speaking of executing, the famous 'sleeping bag kill' - arguably the best death of the series - is in this one. As well as Terry Kiser of Weekend at Bernie's fame - good luck convincing anyone he's still alive after what becomes of him in this.